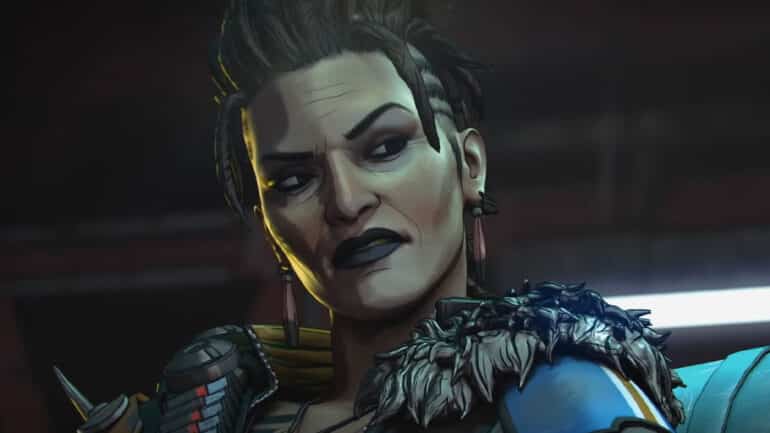 With the release of the latest Apex Legends Stories from the Outlands titled “Judgment” it is pretty much confirmed that Mad Maggie will be joining the Apex Games. Real name Margaret Kōhere, she has been a long time childhood friend of Walter “Fuze” Fitzroy before their partnership turned sour and the former tried to kill the latter when he attempted to leave. In this latest short, we get confirmation that Respawn is indeed planning to have Mad Maggie be the next playable legend in the Apex Games.

On the short animated lore, we are treated to Mad Maggie being chained outside awaiting execution in the rain. This is right before we are treated to a flashback that shows how she got into the situation. Mad Maggie has been caught and placed on a faux trial that benefits nobody but the Syndicate. The judge reveals Mad Maggie’s crimes of which are raiding Syndicate transport ships, 27 counts of sedition, and blowing up the Salvo ship we see on Fuse’s introduction trailer.

Before she is executed via firing squad, the fat judge receives a information that a mysterious “Mr. Silva,” who was watching the whole scene from above, disapproves. The judge promptly approached Mag Maggie before sentencing her to be killed by her old friends in the Apex Games. Thus this is the confirmation we needed to know that Mad Maggie is indeed the next playable legend in Season 12.

While we don’t know the exact date Season 12 will come, we do know that Apex Legends Season 11 will end on February 2022. We can stay tuned for more trailers revealing Mad Maggie’s abilities on the game.

It will certainly be interesting to see how Fuse and Mad Maggie will be interacting with each other when teamed up. We can already guess the bickering between the two when forced to work together to survive. Judging from Mad Maggie’s personality we assume that she is an assault type character that may directly compete or compliment Fuse’s style.

Of course, Respawn might just be pulling our leg again with another Legend switcheroo like they did with Forge. Though we doubt it’s likely they’ll kill off Mad Maggie in the same way.

For more on Apex Legends, check out our other related content.