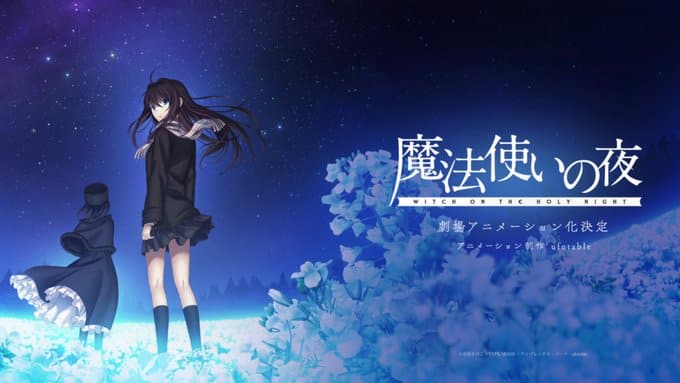 Mahōtsukai no Yoru: Witch on the Holy Night is one of Type Moon’s popular games in Japan. Recently, Type Moon has announced that the game will receive an anime film project.

No news of when the anime is set to be released but more info about the project will be released on their Youtube page and Twitter page in the near future.

Mahōtsukai no Yoru: Witch on the Holy Night tells a about a certain witch during the end of the Shōwa era in the late 1980s, in Misaki town. After moving into the mansion, Aoko Aozaki begins to learn sorcery from a young mage, Alice Kuonji, the rumored witch of the mansion.

The Aozaki family oversees the land on which Misaki is built and the heir is tasked with protecting it. Mysterious intruders have been disrupting the bounded field in Misaki, leading Alice and Aoko to investigate. A mannequin or puppet attacks them and is incinerated. As this happens, both of them spot someone running away, a civilian who must not get away having seen magic alive. Unexpectedly, a young boy named Sōjūrō Shizuki is drawn to the mansion and comes to reside with them as well.

Eventually it is revealed that the intruder who had been disrupting the bounded field is Touko Aozaki, Aoko’s older sister. She, having killed their grandfather, now seeks to unveil the Aozaki’s path to the root.