Upcoming DLC is going to be a blast. 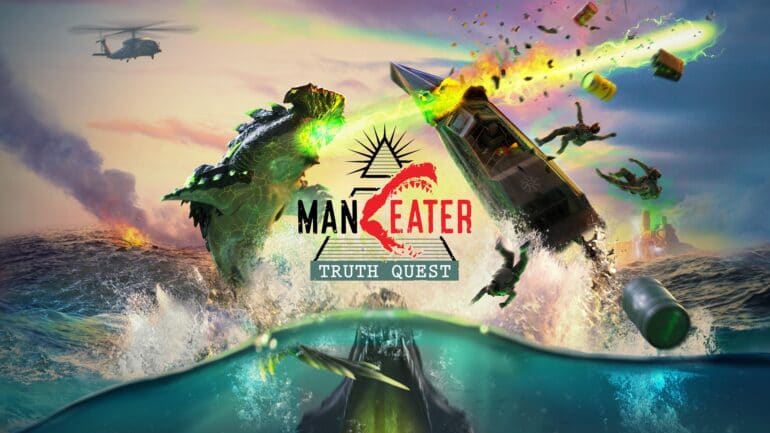 The new DLC Truth Quest will be launching on August 31, 2021 and will be released on PlayStation 4, PS5, Xbox One, Xbox Series X/S, and PC via Epic Games and Steam. This will continue where the story left off following the conclusion of the original game.

This will still star with the evolved bull shark protagonist and the investigative journalist/narrator Trip Westhaven. Truth Quest will take players down the rabbit hole of dark secrets and conspiracies surrounding Port Clovis and the Naval Wildlife Organization (NWO). There have been fisherman tales about animals growing bone-like armor, emitting flesh-eating toxins, or using electricity, but now it has become truth. Westhaven now opens up his ViewTube channel Truth Quest with his followers the Questers into deep waters in order to uncover the dark secrets.

The DLC will take players to a new island off the coast of Port Clovis and will have new evolutions, challenges, wildlife, and many more. They will take on the role of the bull shark again to evolve, eat, and explore. There will be a free pilot episode soon, which will showcase the new objectives. It will feature approximately 10-15 minutes of gameplay and will only give a small taste of what the new DLC will offer.

The Maneater: Truth Quest DLC will require the base game, Maneater, to play — and will be available for $14.99 MSRP.

The original Maneater is a single player, open-world action-RPG (ShARkPG) where YOU are the shark. Starting as a small bull shark pup you are tasked with surviving the harsh world while eating your way up the ecosystem. To do this, you will explore a large and varied open world encountering diverse enemies — both human and wildlife. Find the right resources and you can grow and evolve far beyond what nature intended, allowing the player to tailor the shark to their play style. This is fortunate, because to get revenge on the cruel fisherman that dismembered you will take evolving into a massive shark, an apex predator of legends. Eat. Explore. Evolve.