Metacritic or OpenCritic? – Which Games Aggregate site is the reliable source? 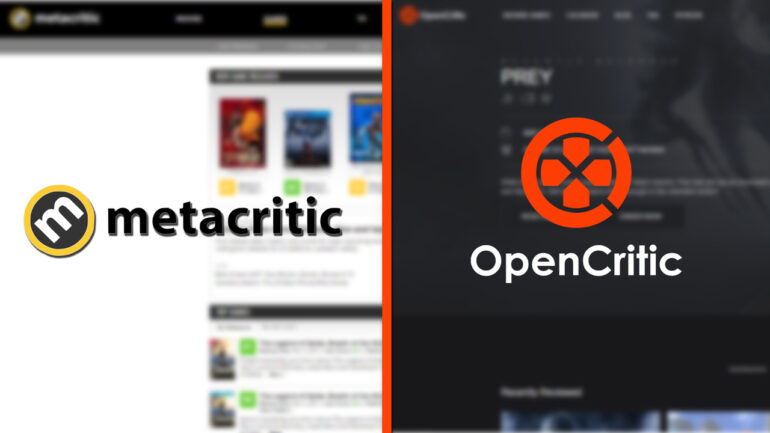 When movies, films, series, and music have their own aggregate reviews site like Rotten Tomatoes and Any Decent Music, video-games have their own too. Exclusive to video-game reviews aggregate sites are GameRankings and OpenCritic. Publishers and developers have been too reliant on Metacritic since it’s one of the longest and considered to be the trustworthy reviews aggregate for games.

We will talk about the two video-game reviews aggregator: Metacritic and OpenCritic. Now it leads to the question: which one is the better and reliable source? Metacritic or OpenCritic?

Metacritic is tackling a much broader scale of aggregating review scores. They take in all types of entertainment product reviews to aggregate. They are also powered by the same company that manages GameSpot, GameFAQs, and GiantBomb – CBS Interactive. 1999 was the year when Marc Doyle decided to compete with Rotten Tomatoes by having their own aggregate site that caters not just movies, but music and video-games.

Metacritic has been the basis of the quality for each video-game released in the market. Publishers and developers, and even the gaming community, relies on Metacritic for the game’s quality and success. Some companies even depend on Metacritic for their employees bonuses. It also made Microsoft to begin using Metacritic as their “quality” basis for Xbox Live Arcade games before they de-list the titles from their program in 2008.

The aggregate site also feature User Reviews where the public can make an account and give out what they have to say about the product. However, in this lengthy investigation from Jim Sterling, it shows the mystery behind the low scores of Horizon: Zero Dawn’s User Review. It seems that fanboys, a term used for loyal people on a specific brand, have been setting Horizon‘s user review score as low as it can be. But that doesn’t also exclude the fans of Horizon: Zero Dawn as they also set some low numbers on Breath of the Wild’s user review score.

Even if Metacritic provides their audience with the perk of having user reviews, the downside is that it’s not moderated properly and constantly. The moderators seem to ignore those unsolicited and unprofessional user reviews on products which put a huge negative impact. User Reviews are still important, but it should be done in a professional and sensible way for us to take it seriously.

Aside from the unmoderated User Review section, the publications they choose are also cherry picked. I understand that there are certain metrics or traffic requirement for a publication or reviewer to be added on Metcaritic, but it seems their list is really outdated. Trusted reviewers such as ACG and Angry Joe are not listed on Metacritic. It seems that Metacritic favor more on written publications and leaving out reliable reviewers out because of this (which is not even on their FAQ, so it’s quite a mystery).

While they won’t add reviewers like ACG and Angry Joe, such publications like Action Trip only has 1 review and their publication is not even active anymore. I get a 404 Not found when I tried to visit Action Trip’s website. And another publication, Game-Science, only has 2 reviews and the domain is still active but the content is not even about games anymore since it’s owned by a different person. Metacritic should update their publication list and tag those inactive ones to make their aggregate scores consistent and legit. And oh yeah, Brash Games is still on Metacritic. You might want to watch Jim’s report about that.

In their FAQ, it clearly stated that “Several times throughout the year, we will re-[evaluate] our current group of publications and make additions and deletions to our panel if necessary.” It seems that Metacritic is still making other inactive and non-credible publications a “pass” for some unknown reasons – especially publications like Brash Games.

Given some instances when Metacritic was asked to pull out a score due to erroneous objectivity (GameSpot’s score of Natural Selection 2), Marc Doyle seems to stand firm with his decision of not considering the fact that it actually was an inaccurate review. This kind of process needs to have thorough investigation than bluntly saying that it’s not possible. It’s a policy that’s quite understandable, but not something to be inconsiderate.

Setting Metacritic aside, let’s go to the newest aggregator that launched in 2015, OpenCritic. It was made by Matthew Enthoven from Riot Games for the sole purpose of making aggregate scoring in the games industry to be reliable again. Leaving out the issues and controversies that Metacritic gained in the past years.

OpenCritic lives up to its openness to the public. They have a fair scoring system that doesn’t have weighted scores from specific publications like Metacritic has, and that they also have a great of way of controlling and moderating reviews. The OpenCritic Contributor Program lets small publications that have high-quality reviews to be added. The scores that Contributors have on games are not added to the official scores list, but on the Contributor Score.

OpenCritic’s Contributor Program is there answer to Metacritic’s ghastly and unmanaged User Review system. As long as the publication meets the desired requirement for the program then they’ll be considered for a spot in OpenCritic’s Contributors List. It’s actually a great direction. This campaign encourages small publications to step-up and gain their audience and make a name in the games industry. The feature also gives a lot of exposure not just to publications but to their writers as well. 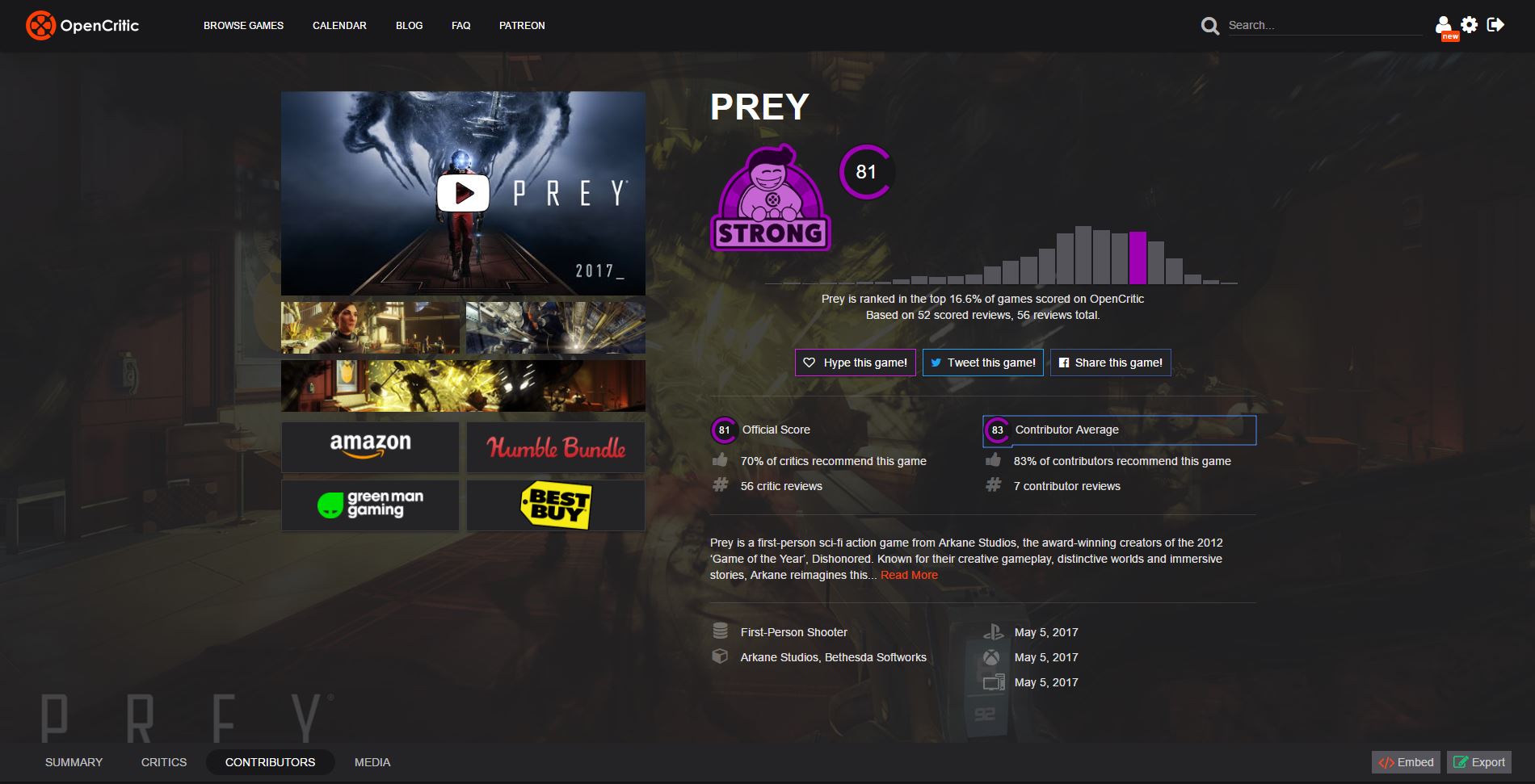 What I also like about OpenCritic’s way of transparency is that they publicly show the exact requirements needed for a publication to be added as one of the official outlets and not as a contributor. The site traffic, social media numbers, and all that stuff. Unlike Metacritic’s process, they make you answer questions that are even almost identical to each other but are just actually worded differently.

Also, with OpenCritic’s transparency, they show a countdown of when the embargoes are lifted. It’s a nice add-on for a reviews aggregator site as it makes people excited and prepared for the time when reviews are going to get published.

The official publication and reviewers list of OpenCritic is constantly updated. They remove official publications that are inactive and have credibility issues (Brash Games, for example). And they don’t decline publications who meet the requirements needed unlike Metacritic – they usually tell publications that they are happy with their current list of critics and they don’t have any plans yet to add new ones. It defeats the purpose of being an aggregator when you don’t even add influencers from the games industry.

When we talk about manpower, OpenCritic doesn’t have the numbers like Metacritic has. There are some games that might not be listed on OpenCritic but as what I can see, they’re doing their best to accommodate titles that really matter. Critics are also able to submit game information to be added on their list of games to be aggregated. Aside from that, aspiring critics can also be added by the request of the editors. They will have their own profile, add a bio, top games, and it also shows their reviews catalog.

OpenCritic is still new. But if you look at the advantages that OpenCritic has to offer, it is way better than Metacritic. It’s reliable, it’s responsive, transparency is their utmost priority, not influenced by any publishers or developers, and the score system is equally weighted unlike Metacritic.

I know Metacritic is still today’s standard aggregate site. I’m not implying they should stop or halt operations, what I want Metacritic to do is to improve their process and policy. And I hope that OpenCritic’s aggregate scores will someday be one of the basis of a game’s success, not just Metacritic. It’s the best games aggregate site today, and hopefully they will continue this path and never go astray.