Moon Knight Episodes List, Release Dates, and Everything We Know 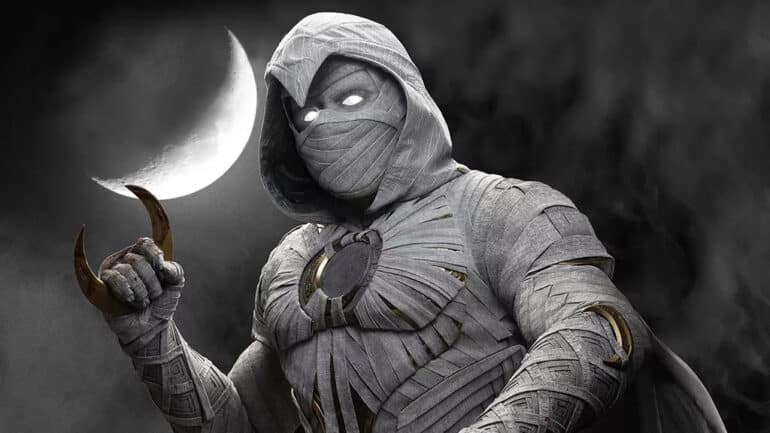 Moon Knight is the sixth MCU series to air on Disney+, it follows Hawkeye which ended its own six-episode run last December 22nd, 2021. A major component of the MCU’s phase four, Moon Knight tells the story of the origins of the lunar-inspired vigilante. But that’s about it when it comes to the story as this article covers everything we know so far about how many episodes the show has, its release schedule, and how long each episode runs.

Moon Knight will be on Disney+ starting on Wednesday, March 30th, 2022. New episodes will air weekly every Wednesday.

When is the first episode of Moon Knight?

How many episodes are in Moon Knight Season 1?

Marvel’s Moon Knight will have a total of six episodes in its first Season. The release schedule goes as follows:

Moon Knight has the same number of episodes as Hawkeye and Falcon and the Winter Soldier.

As you may have noticed, Moon Knight’s final episode airs on May 4th, 2022 aka Star Wars Day. This may or not be intentional on Disney’s part. But knowing Disney, this might be a prelude to something. If anything else, we’ll get an update on Star Wars related stuff. May the Fourth be with us, indeed!

How long are the Moon Knight episodes?

Based on the other six-part Marvel shows on Disney+, expect the show to run anywhere between 45-50 minutes. But we don’t have to guess as much, thanks to IMBb, we know exactly how long each episode is going to be:

If you are planning to watch all episodes back-to-back from start to finish, you might be looking to set aside five hours of your time to watch them. And that is “IF” you don’t get spoiled before all episodes become available. There’s also the fact that Hawkeye’s finale ran for 1 hour and 1 min. If Moon Knight follows suit, its finale could run for equally as long.

Moon Knight – Where to Stream and Watch Online

Episodes of Moon Knight will be available to stream weekly, exclusively on Disney+ in a similar fashion as the rest of its MCU television series offerings. On the same streaming channel as 2021’s highly successful MCU episodes, Moon Knight is the first series to feature a new lead character who has never been seen in the MCU.

With Ethan Hawke (Gattaca, Sinister) as Arthur Harrow, a deadly religious fanatic, and May Calamawy (Ramy) as the archaeologist Layla El-Faouly, a mystery lady from Spector’s past, the film is based on the infamous Waco siege “prophet” David Koresh’s life. Midnight Man himself, will be played by the late Gaspard Ulliel (Twice Upon a Time).

Jeremy Slater, the person behind The Umbrella Academy, is the lead writer of Moon Knight for Marvel. The superhero series was directed by Egyptian filmmaker Mohamed Diab for the first 4 episodes, then Justin Benson and Aaron Moorhead for the last 2 episodes. Kevin Feige, Louis D’Esposito, Victoria Alonso, Grant Curtis, and Brad Winderbaum also serve as the executive producers.

Who is Moon Knight?

Moon Knight is one of the aliases of Marc Spector, who suffers from dissociative identity disorder and has been losing control of his body. Oscar Isaac is the actor who portrays Moon Knight in all of his various personas (as well as accents). Among his other personas is Steven Grant, a bumbling but endearing British museum gift-shop employee who becomes aware of his other identities and fights to recover some stability.

Moon Knight is a fictional character created by Doug Moench and Don Perlin, who originally appeared in Werewolf by Night #32 in 1975 and has since appeared in numerous other publications. Since making its Marvel Comics debut, Moon Knight has appeared in a number of solo series, as well as team-up publications such as Secret Avengers and Marvel Knights, among others. In a future MCU Avengers lineup, it is rumored that Marvel Studios intends to include Moon Knight; however, where and when this would occur is currently unknown.

Do you need to watch any MCU movies or shows before Moon Knight?

You may watch this new series without having seen any of the previous MCU films or television shows because, at least for the first few episodes, there are no ties to any past plots. Moon Knight would be a detached universe made for Marc Spector and his various identities that “rests on its own terms” and does not rely on the audience previously being familiar with its characters

Is there a Moon Knight Season 2?

At this time, Marvel Studios’ CEO Kevin Feige has only confirmed a single season of Moon Knight, but that may quickly change if the character becomes well-known and the show’s ratings are successful.

Check out the latest trailer for Marvel’s Moon Knight.

What comes next in the MCU Series and Marvel Studios?

Doctor Strange in the Multiverse of Madness is planned to hit theaters on May 6, 2022; while the new Disney+ series Ms. Marvel will launch on June 8, 2022; only a few weeks before Thor: Ragnarok hits theaters on July 8, 2022.