21 details from the Star Wars: Obi-Wan Kenobi Trailer that you might have missed. 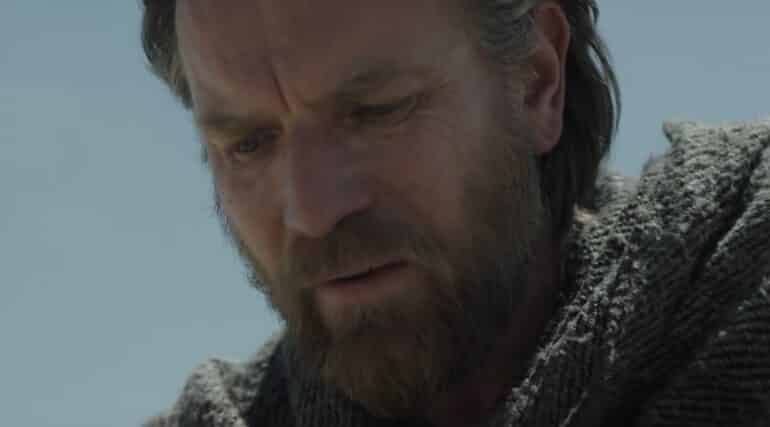 We get our first glimpse at Obi-Wan Kenobi Disney Plus Trailer, which includes a few new characters, planets, and Easter eggs along with some teases about the series’ direction.

We return to Tatooine in the new Star Wars series with Ewan McGregor as Jedi master Obi-Wan Kenobi watching over young Luke Skywalker as he grows up on his uncle Owen Lars (played by Joel Edgerton). But the Inquisitors Star Wars, led by the Grand Inquisitor, are right behind him. Will he be able to remain undetected long enough to keep Luke safe?

Check out the video below if you haven’t seen the trailer yet:

With so many twists and turns in mind, we’ve broken down the Obi-Wan Kenobi trailer for you.

Following on from the events of the Prequels, Obi-Wan Kenobi takes place ten years later. It’s estimated that there are only a handful of remaining Jedi left in the galaxy. While the Empire and the Sith rule, Obi-Wan remains in exile. In the first trailer, the old hero jumps into the action when an evil faction of Jedi hunters comes on the scene, however what is hidden can’t be kept hidden for long.

Obi-Wan Kenobi returns to Tatooine in the series. Fans will find Obi-Wan at the beginning of this journey broken, and faithless, beaten, somewhat given up, says Ewan McGregor. There is a distinct echo of this emotion when the Jedi Master states, “The fight is done. We lost. Stay hidden.” Obi-Wan (McGregor) appears to be living a secret life in a cave on the outskirts of the planet, keeping an eye on a young Luke Skywalker while the Empire tries to exterminate the last of the Jedi.

The first glance at a 10-year-old Luke Skywalker playing in his home in Tatooine, completely unaware that he will grow up to be the new generation’s Jedi hero. During the Obi-Wan Kenobi trailer we see a glimpse of Kenobi gazing over a young Luke, and the imagery intentionally evokes Anakin. Wearing Anakin’s old goggles, he even appears to be fantasizing about racing a podracer!

Those who serve the Sith are known as the Inquisitors, a group comprised of force-sensitive agents and former Jedi. They worked with Darth Vader directly to eliminate the last of the Jedi in the galaxy following Order 66. The Inquisitors were tasked with keeping a check out for reports involving lightsabers and the Force, investigating them to see if they were real, and bringing any Jedi they found to Darth Vader on Mustafar. With this, the group will make its live-action debut as a major antagonists in the Obi-Wan Kenobi series. Count on the Inquisitors to be unrelenting and brutal in their efforts to capture Obi-Wan and the young Skywalker.

Rupert Friend takes on the role of Grand Inquisitor

The Grand Inquisitor is finally getting his Star Wars live-action on-screen time played by Rupert Friend. Except for the fact that he’s a Pau’an from the planet Utapau, not much is known about his past. The highest-ranking Inquisitor of the Galactic Empire, he was initially seen in animated form in “Star Wars Rebels.” He proved to be one of the most cruel Inquisitors in the lore. Before the events of Revenge of the Sith, he worked as a guard at the Jedi Temple on Coruscant. During the Jedi Purge, he swung from good to evil and began hunting down the People he had pledged to defend. While interrogating someone on Tatooine, “the key to hunting Jedi…is patience,” says the Grand Inquisitor in voiceover accompanying a shot of him.

Reva (also known as the Third Sister) assumes a prominent role in the story. She’s played by Moses Ingram in (The Queen’s Gambit).  EW describes Reva’s character as “ruthlessly ambitious” and says she’s “a powerful new antagonist” who is “hunting for Jedi-in-hiding for the Empire.” According to the teaser, she is the Grand Inquisitor’s right-hand woman, dispensing punishment as she sees appropriate while also snooping about for any signs of a Jedi. Reva’s Inquisitor name defies a Star Wars tradition – prior Inquisitors have always been numbered and addressed to as “Brother” or “Sister,” so there’s obviously something unusual about her.

The Fast & Furious star Sung Kang portrays the Fifth Brother. Sung Kang appears in the trailer as a green-skinned Inquisitor leading a group of Stormtroopers through a neon-lit alleyway. He’s one of the Inquisitors assigned to murder Kanan Jarrus (a former Jedi turned rebel operative) featured in Star Wars Rebels alongside the Seventh Sister. In many scenes in the teaser, he appears to be a fly on the wall, listening in on the vital Inquisitor business and possibly reporting back to Darth Vader.

After a brief cameo in “Attack of the Clones,” Joel Edgerton reprises his role as Luke Skywalker’s uncle Owen in “Obi-Wan Kenobi.” In the trailer, the Empire’s overreach and that of Inquisitor Reva put him in danger. Considering how he felt about Ben Kenobi in A New Hope and how he dislikes excursions and going into trouble, it’s safe to assume that we’ll see more of his apathy and reticence throughout this series.

Indira Varma as an Imperial Officer

A mystery Imperial officer is played by Indira Varma (from “Game of Thrones”). More information about her character has not yet been released, but it’s likely awful news for Obi-Wan Kenobi. Kumail Nanjiani, O’Shea Jackson Jr., Simone Kessell, Benny Safdie, Maya Erskine, and Rory Ross are some of the other “Obi-Wan Kenobi” cast members with unspecified roles.

Fans are introduced to a new world in the teaser for Obi-Wan Kenobi. During an interview with Entertainment Weekly, writer Joby Harold said that one new planet is called Daiyu, which “kind of has a Hong Kong feel about it.” In The Book of Boba Fett, the most famous bounty hunter in the galaxy was grounded on Tatooine while the Jedi Master in hiding had an adventure on a seedy planet. At least one action set piece with Reva is expected when Obi-Wan and other characters arrive on Daiyu, but it’s not clear why.

Obi-Wan Kenobi’s task is straightforward: he must remain undetected. In reality, he isn’t running away for his own safety; he’s running away for the life of Luke Skywalker. Obi-Wan’s survival is a secondary goal rather than a primary one, a truth that Darth Vader and his henchmen are ignorant of. For the time being at least, this should explain why Obi-Wan Kenobi briefly returns to action, even if he has to make sure Darth Vader believes he is still dead.

Obi-Wan Kenobi’s trailer claims that sympathy is a Jedi’s greatest weakness. There can be no doubt that a Jedi is compelled by duty to respond to the plight of the needy and the oppressed. As in Jedi: Fallen Order, the Inquisitors create a show of injustice to get a Jedi to come forward with their testimony.

Fans of the Star Wars canon and beyond will recognize several of the characters in the trailer, even though they’ve never been shown in a live-action movie before. This might not be an exhaustive list, but we’ll do our best to point out any Easter eggs the series may be teasing at in the upcoming episodes.

Battle of the Heroes and Duel of the Fates Theme

In the clip, you can clearly hear “Duel of the Fates” from The Phantom Menace and “Battle of the Heroes” from Revenge of the Sith composed by the legendary John Williams. Given that Obi-Wan had just lost two of his closest friends and family members (Qui-Gon Jinn and Anakin Skywalker) during the performance of both songs, it hints an impending doom for the Jedi Order. You can expect to hear these songs again when Obi-Wan faces up against his old apprentice in the near future.

The Obi-Wan Kenobi film teasers reveal that the Inquisitors will indeed arrive on Tatooine. Inquisitor Reva may be on the verge of finding the identity of Luke Skywalker personally, according to images sent to Entertainment Weekly, with one photo suggesting a showdown between Reva and Luke’s guardian Owen Lars. Obi-Wan will have to guide the Inquisitors away from Tatooine in order to protect Luke from the reports that the Jedi are on the planet. By giving Boba Fett a cause to depart Tatooine, Obi-Wan manages to sidestep the fatal flaw that befell The Book of Boba Fett.

To our surprise, these symbols seemed to have been scrawled in a sort of hobo code. To tell the jedis that this is a safe house, or even a reminder that the jedi are still alive and that the light has not gone out, this could be a sign. This also reminds us of the mandalorian culverts that we saw in the Book of Boba Fett, which were marked by concealed symbols that could only be seen via a Mandalorian’s helmet.

The teaser for Obi-Wan Kenobi includes a shot that appears to hint at a Han Solo Easter egg. Inquisitor Reva faces an unidentified assailant with a blaster in her hands. The blaster seems to be a DL-44 Blaster Pistol, Han Solo’s iconic weapon, which most spectators will presume is a Jedi. Following the events of Solo: A Star Wars Story, in which Alden Ehrenreich’s Han was on his way to Tatooine to work for Jabba the Hutt, the Obi-Wan Kenobi series picks up a year later.

It’s possible that Ehrenreich or a de-aged Harrison Ford will make a cameo appearance, but it’s impossible to tell at this point. However, if Han Solo appears, he must not perceive the Force at work; he still thought it was “mumbo-jumbo” a decade later in the first Star Wars film.

Darth Vader’s absence from the first “Obi-Wan Kenobi” series is the most striking. He doesn’t appear in the trailer, but we know he’s coming.
With Ewan McGregor and Hayden Christensen returning as Anakin Skywalker and Darth Vader respectively after the infamous Duel on Mustafar, the Obi-Wan Kenobi series promises to be a thrilling one.

According to Forbes, “I guess it’s no news that Hayden Christensen returns and we got to play sequences together as Obi-Wan Kenobi and Anakin Skywalker and it was just fantastic to work with him again.” McGregor said.

Now, you might be wondering why there is a chair with spikes that resembles the top of Fortress Vader, Darth Vader’s castle and Vader’s personal dwelling, which was a stronghold on the volcanic world of Mustafar. At their headquarters, these inquisitors may have him sit here while they meet.

The Grand Inquisitor’s lightsaber is double-bladed and incorporates a rotating mechanism. These fearsome weapons introduced in Star Wars Rebels were extremely tough for a Jedi to block, and the Inquisitors could even utilize them as a type of helicopter to propel themselves through the air using the Force. The Grand Inquisitor used it to terrify someone on Daiyu into giving him the information he seeks in the trailer.

Two escape pods are shown flying through space at one point in the trailer, making us question if these are runaway jedis escaping from the empire as they board their ship. There are still some jedis on the loose in the galaxy at this point in time in the series’ history, so it’s possible that some of them are trying to reform the order.

Between darkness and defeat, Hope Survives

“Hope Survives” is most likely a reference to Luke Skywalker, the new hope. Kenobi is assigned with the protection of a small kid. In a galaxy gone crazy, Obi-Wan’s faith will be put to the test like never before. Despite the overwhelming darkness, he must learn to cling to the light of hope.

Ewan McGregor can get away with it since it appears exceptionally well-kept for a man who lives in the desert. It’s possible he shaves using a lightshaver.