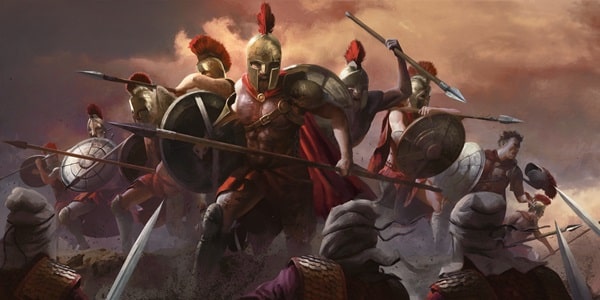 Old World is a historical strategy game where players lead their dynasty over generations against rival kings and queens. The board is always shifting in a playthrough of Old World. Kingdoms rise and fall as power changes hands through inheritance… or by devious means.

The Heroes of the Aegean expansion includes the prologue: Battle of Marathon and 4 other scenarios: On Land and Sea: Ending the Invasion, Rise of Macedon: Building a Hegemony, Queen Olympias: Intrigue and Lies, and Diadochi: Dividing the Empire. Unfortunately, the 5th scenario, Alexander’s campaigns, was not available in the preview build but we were assured it will be when the expansion releases on the 19th.

The first two scenarios are my favorite in the expansion. More than the fact that the scenarios are a near retelling of both 300 movies, they represent the most drastic change from what is expected in a typical round of Old World. Especially in the second scenario where there is no economy involved and special rules take effect in the second half of the scenario.

In the first scenario, we lead the forces of Athens in the defense of the city against the Persian forces. Early on we are instructed to hold a choke point and wait for the council to make a decision. At the same time, we are to send a messenger to Sparta and ask for their air. If you’ve seen the movies, then you probably know what happens next. Despite being somewhat outnumbered and without more aid, I initiated a desperate attack before the Persians had a chance to dig in. At that point, I felt like Themistocles ordering the Greek forces to descend on the Persians. (In a less dramatic way.)

As mentioned earlier, the second scenario differed from everything I’ve come to know about Old World. First off, there is no Capital to defend. The first part of the scenario sees King Leonadis and his “300” Spartans holding the hot gates at Thermopylae. There is no winning in the situation. We are only asked to hold on for as long as possible before succumbing to the enemy’s assault. This is probably the most I’ve used the promotion system to keep soldiers alive. But limited mobility and no archers ensured that the king’s end was inevitable. It was really fun though.

The second half of the scenario sees the combined Greek fleet go up against the imposing Persian fleet. Depending on your performance in the first half, you will receive an additional number of ships to use against the Persians. In this battle as well, promoting units is the key to victory. Everything then collides in one big climax in the Plataea. This was really fun.

Scenarios 3 and 4 had the most narrative choices out of the whole expansion. The first two scenarios asked us to adapt and make do with what we had to work with. In the next two scenarios, however, the game put us in a sequence of events where our choices change the very way world events play out. Like in Scenario 3, Philip II must deal with the barbarians that surround our cities. We can either choose to take them head-on or take the route of diplomacy. The same goes for the Scenario where Queen Olympias must play the role of politician for the sake of young Alexander. Her choices have a profound effect throughout the scenario.

The last scenario plays like out like your typical round of Old World – with a twist. The beginning of the scenario asks you to choose one of Alexander’s generals and unify the broken fractured pieces of the empire. The safest bet is to choose the Seleucid Empire for it is the largest of the four kingdoms. For a more challenging time, you can choose to play it out as Casander’s Macedonia. They control the least amount of territory and they have to expand against stronger enemies. This scenario is the longest to complete. It expects players to apply everything they’ve learned in the game while fending off multiple attacking forces.

And that’s about it for the scenarios in the preview. All in all, these are some clever use for Old World mechanics. I typically didn’t like how enemies focus down one unit at a time but that’s pretty much par for the course. This is a good addition to the base game and I can’t wait for players on Steam and GOG to get their hands on it.

Old World is set to release on Steam and GOG on May 19th. The game is out now on the Epic Games Store.