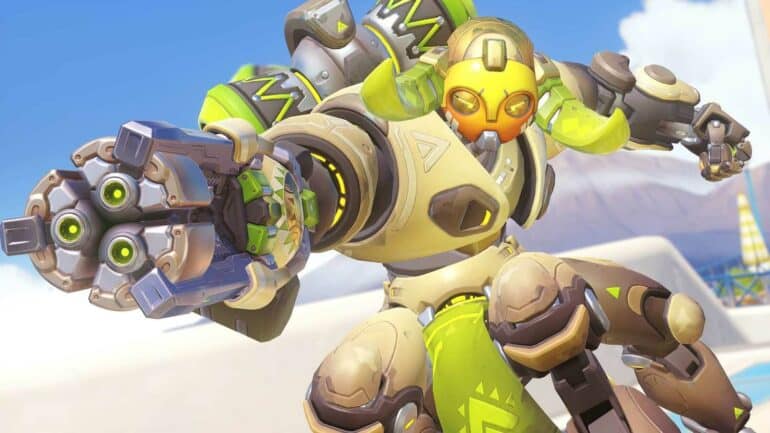 The new Overwatch 2 Tank tier list is a drastic change from the original meta. Competitive plays have never placed so much emphases on Tank heroes due to the Overwatch 2 team changes reducing Tanks per each team into one. You might be wondering who the best tank heroes in Overwatch 2 Season 1.

Here are the tank heroes ranked in Overwatch 2 Season 1:

If you can get some momentum, Wrecking Ball is a great tank. Otherwise he can feel a bit clumsy to main. Sure, Wrecking Ball is a sheer destructive force that’s hard to put down but you also need to know how to setup his attacks right to really make him a menace. That grappling hook gives him a lot of movement but takes a while to get used to and feels awkward to control.

On the bright side, Wrecking Ball is outright a menace once you’ve mastered him. He can drop down on enemies below ruining their formation and turn the environment into a minefield that denies and locks down an area. His default fire also does decent damage.

Doomfist suffers a bit due to his change as a Tank instead of his previous Damage role in Overwatch 2. The larger health pool he’s received does a lot to mitigate that he really needs to be up close to do damage. Thankfully, Doomfist’s kit is complimentary to his playstyle allowing you to quickly close the gap with his Rocket Punch and Seismic Slam.

The problem is that Doomfist doesn’t offer anything in terms of actually protecting his team. The best he can do is take attention away from them. Despite being a Tank hero now, Doomfist still embraces his Damage hero roots.

Sigma is a decent tank to pick with the only downside is that there are other tanks who can do his job better. While the shield he can throw out is useful in certain moments, its low health pool of 700 means that it can go down pretty easily. Part of the problem with playing as Sigma is that it can be awkward to aim his attacks.

This doesn’t mean Sigma has nothing to offer on the table. His Kinetic Grasp is useful when pestered with annoying Damage heroes since he can absorb the damage and grow overhealth which gives him survivability. Sigma can push back enemies who get too close with his rock throw but it doesn’t stun enemies unlike before which puts him lower in this Overwatch 2 Tank tier list.

Reinhardt is one of the most well remembered Tanks and carries his role with due diligence even in Overwatch 2. He can be particularly difficult to master due to how he lacks any range options except for one ability. You really need your team to coordinate with you when playing Reinhardt because they can often just run past your shield.

The best part about Reinhardt is how great his defensive charge is. His shield has a lot of health and easily recharges. Reinhardt can also close off gaps against long ranged fighters and pin them to the wall. That being said, it takes a lot of skill to main Reinhardt and he can be really difficult to pull off.

Junker Queen has the notable feature of making enemies bleed which only makes her stronger. She can heal from damaging others making her the perfect Tank hero for aggressive players. The tradeoff is that she doesn’t have much in terms of distance and her Jagged Knife is really hard to aim. On top of that, Junker Queen is squishy compared to other tanks and her slow rate-of-fire often puts her in a lot of risk.

But if you can master Junker Queen, you can effectively two hit certain enemies by pulling them towards you and hitting them either with your shotgun or Carnage. Her Commanding Shout is a great speed boost for her team but should only be used on certain moments.

Zarya becomes better at offense the more her defensive particle barrier take damage. The fact that she can give these shields to herself or one of her allies makes her a pretty good pick. For those looking for an offensive Tank, Zarya has a lot to offer.

One of the best ways Zarya is used is when she’s paired up with other heroes who can splash damage. Her ability to force enemies to stick together thanks to her Ultimate can wipe out teams when used in the right time.

Roadhog has always been fun to play around with his Chain Hook being particularly amusing. However his recent buff in Overwatch 2 has made him plenty difficult to kill. Roadhog’s shotgun hits hard which is a death sentence for anyone he pulls close that isn’t an enemy tank.

The tradeoff is that Roadhog can feel slow, without mobility boosts that other Tanks have he can be a sitting duck without the support of his team. He does mitigate this by being so hard to put down that his ability to reduce damage and heal more than makes enough for his shortcomings.

Winston has made some upgrades to his Tesla Cannon in Overwatch 2. Although the addition of a ranged alternate fire doesn’t really do much as the damage is negligible even when fully charged. It’s a bit of an odd choice, but this doesn’t make Winston any less of a viable pick.

Where Winston really excels is in tight close quarters as his wad of electricity can damage multiple enemies at once. His ability to protect his team with a barrier is also useful against annoying Damage heroes who keep their distance. While his Ultimate isn’t bad, it’s often challenging to time right due to requiring him to go hand-to-hand.

D.Va specializes in tanking a lot of damage for her team. With her Defense Matrix, she can put a stop to most projectiles before they hit their mark. The thing with D.Va is that she’s an incredibly good tank but she does suffer from limited range. Her default fire is good enough to put most Damage and Support heroes down, but she can struggle when fighting against Tanks who have more damage as well as a large health pool to tank her hits.

This doesn’t remove how viable D.Va is as a Tank hero. She more than earns her high spot in this Overwatch 2 Tank tier list because of how quickly she can turn around pivotal moments if played right. Enemies packed up together will suffer as D.Va approaches with her mech counting down to self destruct which is more than enough to one shot most enemies.

Orisa is a great tank for putting on pressure with her massive rework from the original Overwatch benefiting her in its sequel. This Tank has it all with Orisa being able to mitigate incoming damage while charging at the same time. You’ll need some skill to use her Energy Javelin throw effectively but it does knock back enemies.

All of her abilities makes Orisa really hard to kill due to her ability to regenerate health and nonstop firing at enemies. Orisa has everything a Tank could want without any noticeable downsides.

For more Overwatch 2 content, you’re already in the right place.

Check out this Youtube video from Flats who shows you a complete guide to every Overwatch 2 Tank in the game.