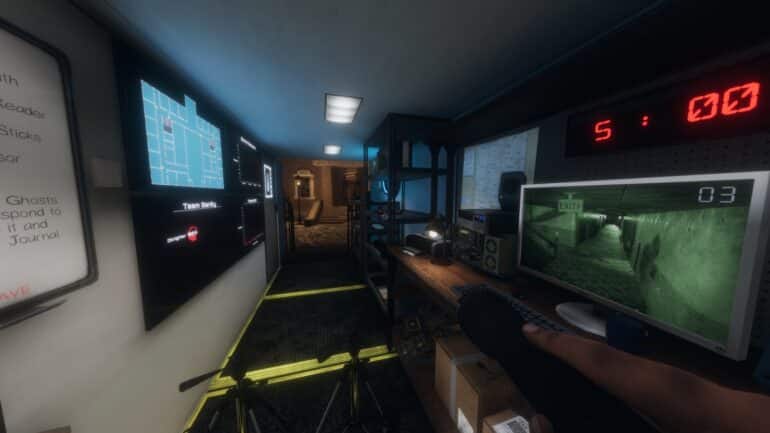 Kinetic Games recently released the new Phasmophobia Tempest update for the popular horror online co-op game and one of them improves a very important item in ghost hunts.

The latest update has now hit Phasmophobia online, which has introduced a few additions, a lot of improvements, changes, and more. One of the items that got affected is the crucifix, a very useful item in driving away ghosts before they get the jump on you. The update improved on that and now everyone is looking at ways how to weaponize this rather interesting feature.

When getting haunted by ghosts, in an emergency, players can put a crucifix on the ground and it will create a rather small dome of extra security. The only problem is, it is rather quite small and the crucifix will dissolve after two uses. The item can be used to give players more time to complete optional quests and sometimes, it can be used to stop a whole haunt completely.

Before the update, throwing a crucifix is a bit of a gameplay as players do not know where they would land exactly. The latest update changed all that as it allowed them to finally see the trajectory on from the thrower down to where it landed. It has also allowed players to see the three-meter radius of extra security.

Unfortunately, some nasty features got back into the game again. Fog is back again, which is a curse for some players as it confuses them easily. There is now sunrise weather, optimized rain, and now snow effects. The new Custom difficulty system has been rebalanced again and have made some big changes to the mechanics.

From now until Early January, you can take part in the Phasmophobia 2022 Holiday event!

With the addition of Custom Difficulty, we’ve seen so many exciting, unique and challenging games being created, but we’d like to redirect what the purpose of Custom games is, and there are several reasons why:

Because of these reasons, we’re making the following changes to Custom’s rewards:

We know this is a huge change, but this should separate custom games into a challenge and fun mode, and keep the default difficulties as the main route for character progression.
In the second part of this major update (coming soonTM), we’ll be adding something special for those wanting a regular, harder challenge than Nightmare and something super special!

Note: Current and future challenges (like the Apocalypse Challenge) will still be accessible in Custom and still grant trophies for your collection.

To compensate for the above changes, we’re adding some additional rewards for playing well in the default difficulties, which will reward players who have the sharpest eye for ghost identification.

We’ll also be changing the rewards for secondary objectives, to encourage players to complete the primary objective each game instead of ignoring it.

Note: Investigation bonuses are affected by the difficulty multiplier!

With every update, we like to look into which ghosts need some love. We found that some ghosts needed some buffs and some needed changes to help with low evidence runs!

Wraiths have been adjusted to match their journal description better

Obake have finally remembered how to shapeshift!

The legendary Revenant has been left behind in the ranks of the new threatening ghosts. So, we’re finally returning some former glory to the speed beast, and adjusting how this ghost hunts, hopefully placing them back on the podium!

As Goryo have a history of disobeying their roaming changes, we’ve finally put an end to the over-exploring ghost

+ The empty details on the ghosts would only spoil the fun so if you want to know about them, check here.