Preregistration is now ongoing and has milestones to achieve for freebies. 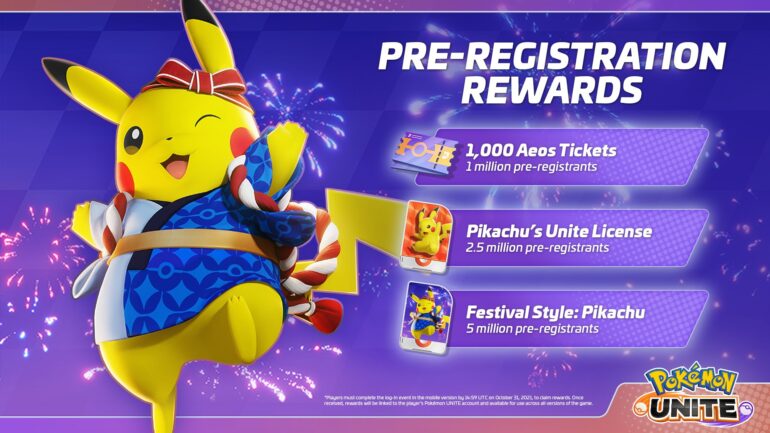 The Pokemon Company has revealed the official release date of the mobile version of MOBA Pokemon Unite.

According to the official website, the mobile version will be released on September 22, 2021 for Android and iOS devices. There is already a preregistration promotion ongoing on the App Store and Google Play Store. Fans who have mobile devices who wants to try out the game are advised to do so because there is a bonus for preregistration.

Claim the bonuses by just logging in to the mobile version of the game and just complete the log-in event by October 31, 2021 at 7:59 am PDT. Those who already have the Pikachu Unite license (for some reason) can receive the Aeos coins as replacement.

Aside from that, Mamoswine and Sylveon will be added to the game soon. They are new playable Pokemon for the game.

The Nintendo Switch version will not be left behind as they will get the Zeraora Unite license as a special gift. Linking the same log-in account for both Nintendo Switch and mobile versions can net players Zeraora as well on mobile.

Yesterday, the official full patch notes was released and it detailed the different fixes, nerfs, and buffs for the game. A new trailer of upcoming Pokemon Brilliant Diamond and Shining Pearl was also revealed recently showcasing the major changes in the remake.