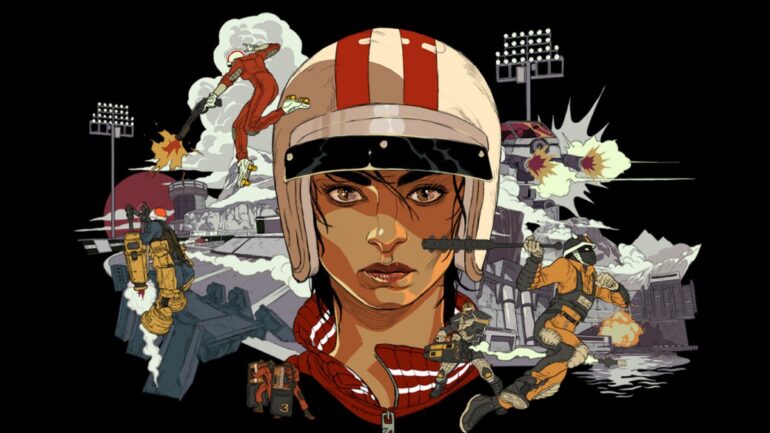 It takes an extraordinary amount of skill and a lot of luck to survive a bloodsport against your will but Rollerdrome is not your typical run-of-mill death show, it is a professional sport that people willingly sign up for. And that speaks volumes more about the mettle of the contestants who participate in it than it does about the bloodsport itself.

Rollerdrome is a third-person action shooter set in the near future where a new bloodsport called Rollerdrome is starting to take over. Players take control of rookie and silent protagonist, Kara Hassan, as she goes all-in on this life or death competition.

Let me start this review by giving props to the small development team behind Rollerdrome. The game is relatively short if you decide to breeze through the content but its gameplay loop is laser-focused. Let’s go through them one by one. Starting at the moment you enter the arena.

The moment you roller skate into the arena it’s you versus a predetermined number of opponents that teleport into the battle when enough of the competition gets eliminated. They usually hold their ground but some are capable of translocating. And that’s kind of annoying considering part of your goal is to extend your active streak meter by eliminating them.

One way to rack up a high score is by doing tricks, much like in Tony Hawk’s Pro Skater. But instead of stringing moves together to add a multiplier, the player extends their streak by eliminating other House Players. Unfortunately, the elimination of your completion doesn’t reload your weapons. That’s where showmanship comes in.

Performing tricks like grabs, spins, flips, and grinds all reload your weapons. And if you’re thinking that it’s all going to be extremely stressful thinking about moves and eliminating enemies. It won’t be. At least from the get-go. The moves are easy to pull off and you can enter this bullet-time-like state called Reflex Time to give yourself a chance to line up that perfect shot in between tricks. With enough practice, you can string more complicated moves together and eliminate scores of the competition in one fluid motion.

But it’s more than just Reflex Time making the whole thing work. Through experimentation and perseverance, you eventually learn the best ways to deal with certain enemy types. More so, if your timing is really polished you can trigger a Super Reflex. It’s essentially activating Reflex Time that moment you perform a Perfect Dodge. In this state, everything turns blue (except for Kara) and your attacks deal bonus damage. It is extremely satisfying to pull off and the fact that you can activate it in rapid succession makes it even more appealing.

The game does a really good job of easing players into a certain rhythm and flow that you forget that it’s short. Progression in this game isn’t so much about beating the stage, it’s about beating challenges.

In order to advance to the next stage of the competition, players have to complete a certain number of challenges before they are cleared for more difficult stages. It’s like you telling the game that you are ready for more but you’re saying it through your actions. This is pretty much in spirit with many of Roll7’s games. And it is a joy go to through the list and complete challenges one after another.

The weapons in the game include dual pistols, a shotgun, a grenade launcher, and a long-range charge weapon. What the game lacks in choice, it makes up in distinct functionality.

The dual pistols apply constant pressure and prevent certain enemies from using their defensive abilities while Reflex Time is active. The shotgun has a rhythm to it but can’t one-shot enemies like POLYBEAMS and WARHEADS. The grenade launcher causes area damage but it’ll only explode if it comes into contact with something. The charged laser weapon is best for long-range sniper weapon but requires pinpoint accuracy to make work. And you’re going to want to be really familiar with these weapons if you want to tackle the game’s epilogue campaign.

There are only 7 enemy classes in the game – GRUNT, SNIPER, WARHEAD, RIOT GUARD, POLYBEAM, MECHA BRUT, and STOMPER. And like the previously discussed weapons, each enemy type is very much distinct from the last. This prompts you to constantly switch up your tactics and weapons… if you want to do things cleanly. There’s nothing stopping you from sticking with your shotgun and going ham. Unless it’s fighting up against the Spider Tank boss.

The only thing that passes as a “boss” in this game has got to be the Spider Tank. You’ll run into it twice in the campaign. You’ll need the grenade launcher to damage its exposed vents. Oddly enough, the second encounter didn’t shake things up all that much. The tank had more bells and whistles for sure but it kept the same weaknesses from the previous encounter.

One of the things that took me quite a while to get used to is this game’s controls. As someone who is used to Tony Hawk games, I’m used to sharp turns and quick moves that align with the camera. But here it takes a surprising amount of effort to turn in the direction your camera is aiming at.

For instance, If Kara is moving towards the screen and you want to turn and face the enemy your camera is pointed at, you literally have to force yourself to break the momentum and circle the long way until both character and camera align. You can also dodge roll to align yourself quicker but it’s very wonky and counterintuitive. Apart from that though, the free-flowing combat is sublime.

My biggest disappointment with the game has got to be its nearly non-existent story. It would have been fine if it was all about Kara making her way to the Championships as a rookie. And yet, there’s this side story involving activists and corporations. But you can completely ignore it and focus entirely on the competition. If they REALLY wanted it to be part of the experience, at least show that this stuff affects Kara. The only time it ever mattered was with this one choice at the very end of the campaign. And that’s because I took the time to snoop around. I wish Kara reacted in some way but she doesn’t.

The cell-shaded look really works well with the game and is effective in conveying the action on screen. It’s like a grounded version of a comic… but less reliant on exaggerated poses. There’s techno music playing in the background but really you won’t be listening to it half the time as you’re always looking out for Perfect Dodge opportunities.

After winning it all in your rookie season, the show’s ratings go through the roof, and that necessitated next season’s ‘Out for Blood’ Campaign. The second season of Rollerdrome takes the game’s 11 maps and dialed up the enemy encounter rate to 11 as well. The enemies aren’t any harder than they were in the regular campaign, it’s just that you’re dealing with a lot more of them. Well, at least Kara is wearing her slick new Champion’s jumpsuit. If you are looking for challenging content, Out for Blood is where it’s at.

All in all, Rollerdrome absolutely nailed it in terms of gameplay but it came at the cost of other aspects such as the story. The two-tier system of guns and tricks is so well done that I constantly find myself trying to outdo my previous score because I know I can do better. Unfortunately, the game failed to tie the overarching story and gameplay together in any meaningful way. If it’s stylish action you’re looking for, Rollerdrome’s got that covered for a while. It’s just a shame that doesn’t offer much else. 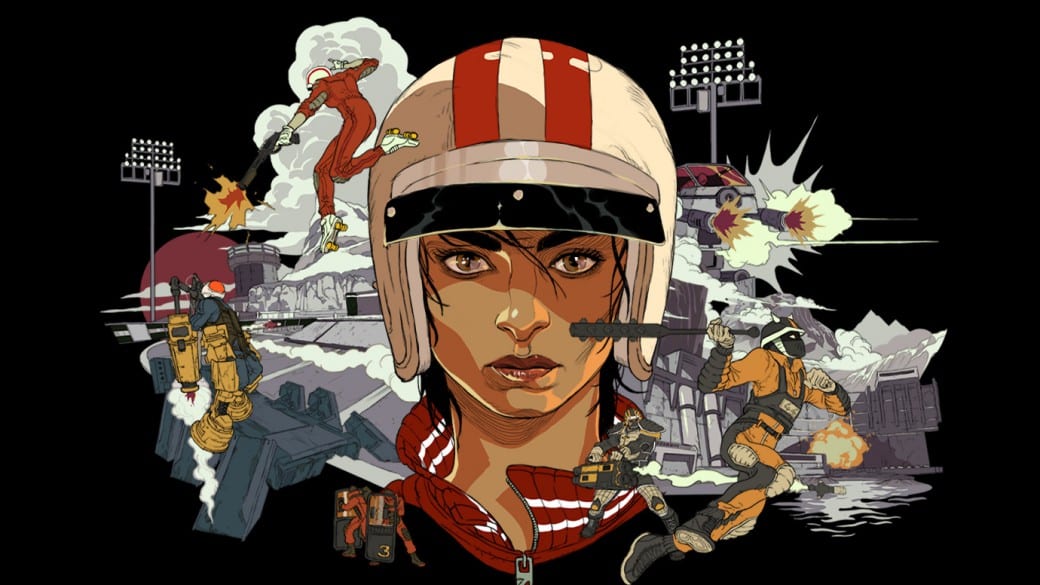 Rollerdrome – Review
Score Definition
We tell you, it’s a good game! It’s not average! It might have some problems here and there, but you have to admit it is a “Good” game.
Pros
Compelling gameplay loop
Incremental scaling of challenge
Leaderboards provide replayability
Cons
Limited in terms of enemy variety and strategy
Not much of a story
Tends to occasionally glitch out on surface edges
7.5
Good