Sea of Thieves gets Free Haunted Shores Update for June 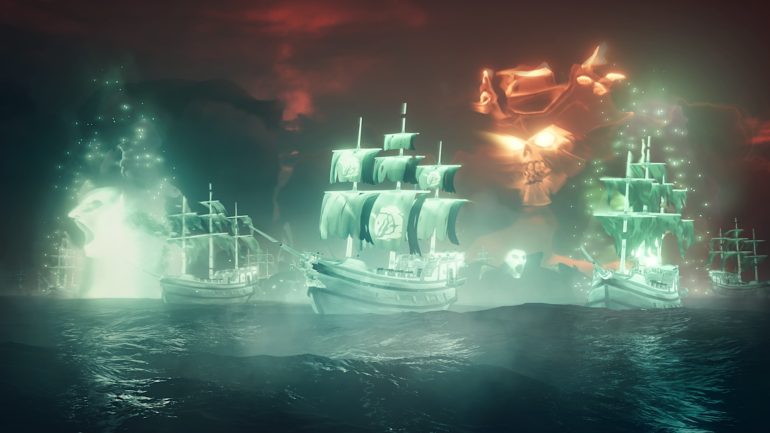 The new free June update is called Haunted Shores, which will be coming to Xbox One, Windows 10 PC, Steam, and with the Xbox Game Pass. This new free update will focus on the re-emerging tyrant Captain Flameheart who is looking to control the seas once again.

Captain Flameheart’s spirit has gotten loose, grows in power, and now has found a way to rally supernatural support from the Sea of the Damned. He commands Ghost Ships, which will become the biggest threats in the seas, and with their phantom forms it will be easier to destroy earthly ships. The pirate ghosts are also armed and outnumber the living.

The ghostly crew uses otherworldly weaponry and drop mines to catch the unwary. Players will need to be wary of such weapons, need to be quick-witted, and have great crew communication.

Captain Flameheart has his own ship called the Burning Blade. Flameheart’s looming skull will now manifest over island like the clouds that represent Skeleton Forts or Skeleton Ship battles. It signifies that the Burning Blade and an armada of Ghost Ships have appeared around an island.

Players will have a hard time fighting against Flameheart’s fleet. The Phantom and Wraith Cannonballs fired by the Ghost Ships are powerful and can down ships easily. Defeat them and gain the supplies in order to gain advantage against the Burning Blade. There are also valuable Damned treasures that can be looted as well with unique sails that can be unlocked.

The best part of this free update is that Haunted Shores will not be going away since it is a permanent addition. This will be a new way for pirates to gain gold and reputation with the Order of Souls together with the usual Skeleton Bounties. Players can now accept these Voyages from Order of Souls representatives or from duke in the nearest tavern.

A new playlist of Bounties will be available too, which offers bonus gold and Doubloons for completing in-game tasks, plus special time-limited events like The Hunter’s Call. This will boost rewards for deliveries of cooked meat from sharks and Megalodons.

The Haunted Shores update will has upgraded the shanty system as well. Players can now use the menus to jump straight to a favorite tune. More shanties songs have been added to the list as well. The Pirate Emporium has been upgraded with a new undead-themed Blighted Ship Set for the fans of State of Decay. Some pets have been transformed into living treasures by the Gold Curse, a range of new outfits for pets, and animal-themed pirate dance emotes for players.