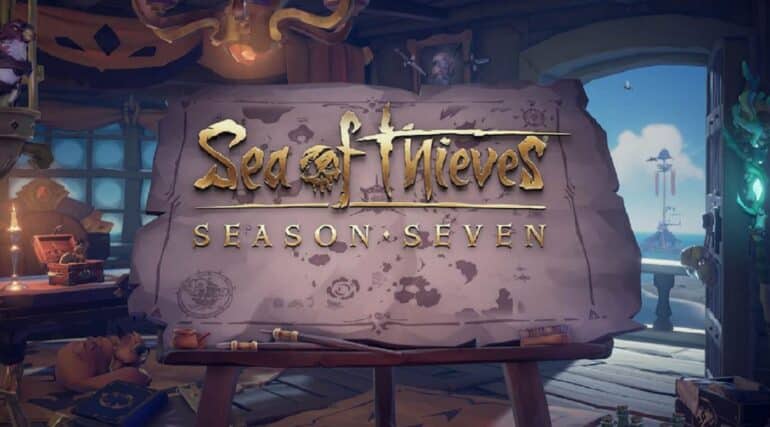 Sea of Thieves Season 7 has finally arrived, and with it comes a wide range of new features. Major new gameplay mechanics are introduced this season, and players can finally feel like captains as they take the wheel of their own uniquely designed vessels and make their mark on the boundless seas. So, let’s go right in and discuss all the changes and challenges that Season 7 of Sea of Thieves offers.

Season 7 of Sea of Thieves is centered on the Captaincy notion with the hashtag #BeMoreCaptain, and a major component of the new season is allowing players to fully customize their ships.

Buy Your Very Own Ship

The ships can now be purchased from the main menu, though it’s worth noting that their prices vary and that they each have a limited capacity. If you’re just starting off in Sea of Thieves, this may be out of your price range.

Below you’ll find a complete breakdown of the costs associated with each ship:

Once you buy a ship, you’ll be brought to a different hub where you can give it a name right away.

In spite of Rare’s statement, there is a large pool of potential names for your ship from which to choose. Crests with the ship’s name inscribed on them will be displayed over the captain’s quarters.

The captain’s quarters are now fully customizable in-game, joining the ship’s exterior as a canvas for player creativity.

Changing your ship’s interior requires a trip to the Shipwright Shop, which is located on the docks right next to your ship when you spawn. Once you’ve done that, go ahead and select Ship Decorations from the Ship Customization Chest.

Everything from the table to the carpets can be personalized. New Trinkets, such as trophies of past voyages or just amusing tiny decorations, can be displayed on shelves. Pictures can be hung on the wall, but be aware that the ship’s motion and any explosions could potentially cause them to be skewed.

Furthermore, for the price of gold, you can permanently save your customized ship. Now when you pick up a game, your ship will already be customized to your liking. Keep in mind that battle scars on the ship will be saved along with your ship customizations before shelling out any gold. Ships can be repaired by visiting the Shipwright Shop and paying the vendor.

Additionally, Players can now visit the Shipwright Shop and purchase all the supplies before sailing into the sea. You can buy wood, cannon balls, throwables, and food.

Below are the prices for each item in-game:

There is a progression system called Milestones, as well as a seasonal rewards path that grants access to brand-new cosmetics.

In Season 7, players will be able to use a new feature called Milestones to further customize their vessels. Milestones function similarly to High Scores in other games; once you’ve reached a certain point, the game will award you with a special reward.

Alignments will differentiate each major milestone. You can tailor your interest, as you would on a voyage, to a specific faction.

A fresh set of rewards is available to players in Season 7. Over 100 levels have been added, each with a new reward, some of which are summer-themed clothing or accessories.

In Captains Voyages, players have the option of making individualized excursions. All trading companies are included, and activities in-game can be purchased separately. You can set up a simple one-map mission, or you can stretch it into a multimap objective for a larger reward in Captains Voyage.

The Captain’s Logbook can be found in the Captain’s Quarters and keeps tabs on the session’s accomplishments and other information. Additionally, if you manage to sink a Captain’s ship and salvage its logbook, you can sell it to the Reaper’s Bones for some gold and reputation.

All players will be pleased to see the Sovereigns who operate the Trading Posts, though they will only interact with Captains.

In exchange for gold and reputation, players can hand in any loot they have found. They’ll take care of the grunt labor, and you’ll reap the same benefits. On top of their trading post, you’ll find a harpoon, speeding up the process of unloading chests.

Players who purchase the Season 7 Plunder Pass will be able to earn more Ancient Coins and Pirate Emporium loot as part of the Season Rewards system, and there are 13 additional cosmetics to find and use.

Everything in the new Plunder Pass has a tropical feel to go along with the castaway theme. Additionally, Pirate Emporium offers a wide array of new items for players to use in their adventures.

The following are the items you can obtain:

Also check out this video by Syrekx on Sea of Thieves Season 7 – CAPTAINCY FULL UPDATE GUIDE: