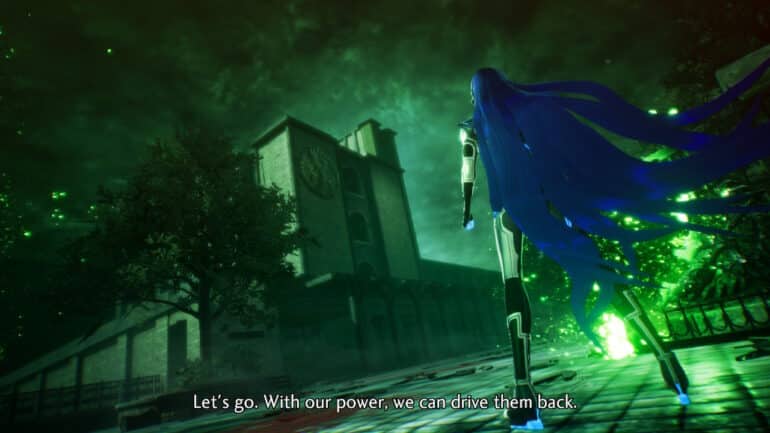 This newest entry does its best to walk the line between honoring some of those mechanics while also offering new and improved takes for the series. And for the most part, it really works.

While I haven’t beaten it yet, I am about 35 hours in. It is apparent from the get-go that Atlus has put a lot of love and time into the development of the game. There is an entire open world with monsters to encounter on the field rather than via random enemy encounters. Enemies are breathtaking as they roam across large sand dunes or in dilapidated skyscrapers, and some stronger enemies fill the screen as they lurk about looking for prey.

Atlus’s ability to use an open world is thanks in part to developing the game using the Unreal Engine, and it creates a new standard for the SMT series. At times, the world is a little lacking. While character models, enemy designs, and animations are good, a lot of the textures and designs of the open-world don’t reach the heights I was hoping to see. At times, it felt like I was moving a current-gen character through Nocturne’s world.

Battles are fairly similar to past entries and the Press Turn system returns. This allows players and enemies to exploit weaknesses and earn another turn while using an attack that is blocked, misses, or reflects makes you lose a turn. It’s a fun system to learn to master. Battles are also a lot more interesting visually thanks to varied animations, angles, and slick character designs.

Recruiting demons and fusing them is still your bread and butter to advancing in the game, and the inclusion of unique attacks for the protagonist and some demons keeps things interesting. Recruiting demons is still somewhat frustrating as there still isn’t much rhyme or reason to what kind of responses they each like when trying to convince them to come to your side. Thankfully, there are things called Miracles you can learn that give you perks to demon recruitment, stats, and the newly introduced Magatsuhi Gauge.

Once the Magatsuhi Gauge is filled, you’re able to choose from a variety of powerful skills or attacks to use. My go-to has been Omagatoki: Critical which turns all allies’ hits, even magic, into critical hits. There are others that boost your stats or lower an enemy’s as well as a number of devastating attacks to use. Some are better than others. Another new and welcome feature is the ability to use an enemy’s essence to learn new attacks and even their affinities to certain elements and ailments. These can be found scattered around the world, purchased, or as quest rewards. It is fairly important to stay on top of exploring.

There are creatures called Miniman to collect who give you Glory to buy Miracles. For every five you find, the shopkeeper Gustave rewards you. There are also light platforming areas with a treasure that gives you a large amount of Glory. It adds some variation to what is normally a very battle-heavy series.

The game can be very difficult even on normal. I’ve been wiped out by regular enemies more so than bosses. It’s very easy to find yourself getting lost doing side quests and fusing demons for hours, and I think that is part of Atlus’s goal as the story has a slow build. There are some choices to be made, but so far now all of them have felt super impactful. The characters are well developed and the voice acting is great. I am entranced by the angel and demon war the game presents and it’s been fun getting to know the various players in the overarching battle.

There can often be, however, five or six hours in between major story moments if you’re running around exploring, doing side quests, and improving your party. So far, I don’t mind it, but I have found myself wanting to go further in the story but feeling like spending the time doing exploring is required as I’ve just been at the same level as bosses during these major story points.

Overall, Shin Megami Tensei 5 is a welcome addition to an already fantastic series. I look forward to finishing it and seeing how the rest of the game plays out. Check back soon for an update on my review and our score!