Skarner finally gets his makeover! 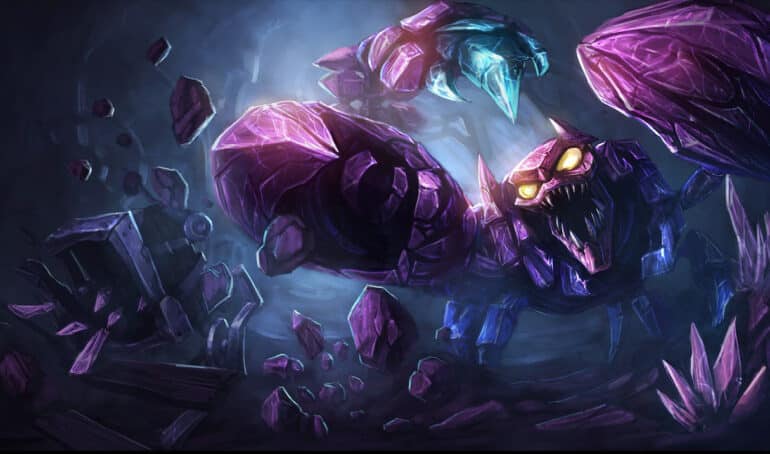 After winning the League Season 12 VGU poll, Skarner rework League of Legends character has been confirmed by Riot Games. It will be a rework to all of his abilities and visuals.

To everyone’s surprise, Skarner won the poll by a massive margin compared to the second placer Shyvana, which only got 14 percent votes while Skarner got 33.4 percent votes. He was the most wanted champion since the poll asked which one they wanted to receive a VGU update. It seems Skarner was the one who needed it most and probably the less popular one in terms to being played in the game.

Other champions that were available to vote were Nocturne, Kog’Maw, and Tryndamere. They all had low votes as well.

The Lead Champion Producer at Riot Games shared a little glimpse of what to expect with Skarner’s changes. “We’ve tried smaller reworks of Skarner’s kit in the past, but it never really increased his playrate, so we’ll be looking to do a massive reboot of his kit, theme, and visuals (similar to Sion and Urgot). We’ll look to keep his kidnapping ult in some form, but otherwise we’ll be rebuilding him from the ground up.”

Skarner is the candidate that really needs an update as he has one of the lowest playrates of all champions on Summoner’s Rift in Season 12. He is currently at 0.5 percent Pick Rate at levels of play according to stats site u.gg.

Riot will most likely improve his kit this time around and will be modernized while not completely abandoning his unique ultimate ability Impale.

Shyvana could get a rework in the near future as this is the third year in a row that she ranks second in most votes for the VGU update. “So while we can’t promise that Shyvana will be the next big VGU we do, she is a pretty strong contender for the next one we explore outside of a VGU vote,” Riot said.

No official release date for the Skarner rework has been announced, but there should be some new details as Season 12 pushes through.

Check out the list of all League of Legends champions sorted by release date here.