Check out these multiplayer modes. 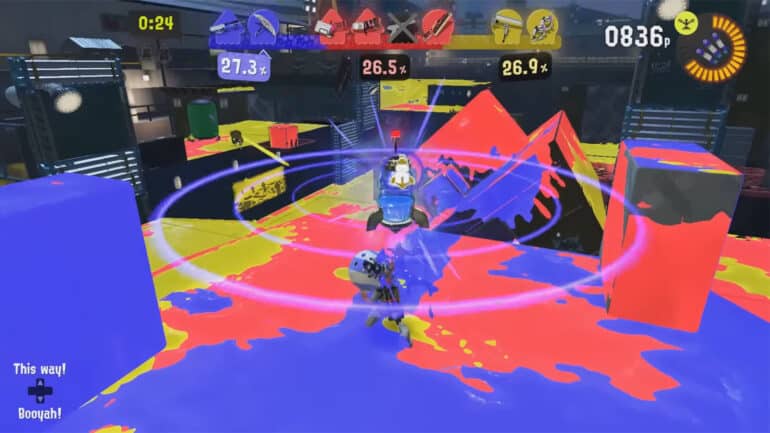 Splatoon 3 will still have most of its multiplayer modes from its previous games, both the cooperative and competitive modes. Despite this, there are a few changes on some of the game modes that will definitely spice the gameplay up and make things more interesting.

We will go through all the returning game modes in Splatoon 3, take a look at the new Tricolor Turf War mode, and then we will also take a peek at all the new and returning maps.

Splatoon 3 has several different multiplayer modes that players can dive into depending on what type of gameplay they like. Most of them are competitive in nature, while one more, the Salmon Run, is a mode where players have to cooperate and defeat a common enemy.

Turf War battles, also known as Regular Battles, are the staple 4v4 competitive battles where the main objective of the game is to cover a large area with ink before the time runs out. Every match runs for three minutes where two teams will have to fight each other to cover as many sides as they can with ink that has their team’s color. Whoever has the largest area covered with their team’s ink wins the match.

Anarchy Battles are the ranked battles where players can fight their way through matches in order to increase their ranks in the leaderboards. Anarchy Battles have four different modes that rotate, shaking things up for players and making them be always on their toes. The ranked matches can be played as a solo player (Series) or as a team with friends or random players (Open).

Its four modes are:

Splat Zones is similar to Turf War, but the maps are divided with zones that can be captured by a team once it has been covered with at least 70% of the team’s ink. The teams’ goal is to capture all zones to activate their team’s countdown timer. Once the timer is running, the team with all the zones will have to defend it from being recaptured by the opposing team to keep their timer from stopping.

A winner is decided if a team manages to deplete their timer to 0, or if a team gets their remaining timer lower than their opponent’s once the 5-minute match timer is up.

The goal of this mode is to place the Rainmaker on all the checkpoints until it reaches the one nearest the opponent’s camp. Unlike in previous games where there is just one checkpoint, there will be multiple checkpoints across the map which will only show up once the centermost checkpoint is cleared.

Clam Blitz is a mode where players will have to collect clams and deposit them on the goal near the opponent’s camp. These goals will be shielded at first, but the shield can be dispelled by collecting ten clams and throwing the Power Clam that forms at the shield. The goal of this mode is to score the most points against the opponent before the match timer ends.

Salmon Run is the cooperative multiplayer mode in Splatoon 3 where four players will have to fight waves of Salmonids on an island map. Along with the waves, Salmonid bosses will also appear which have their own unique attack patterns. The goal in a Salmon Run is to survive the wave until extraction arrives.

To complete a wave, players will have to collect Power Eggs and Golden Eggs and deposit them in the basket. The smaller enemies drop Power Eggs, while bosses drop Golden Eggs. Every wave gets more difficult than the previous one, and on top of that, the weapons that the players will be using are randomized.

A new addition to the Salmon Runs is the appearance of the King Salmonid known as Cohozuma. This massive boss can sometimes appear right at the end of a run, and players will only have a limited amount of time to deal damage to it to make it drop more eggs.

So far, Salmon Run is the only game mode that can be played through local wireless connection.

Big Run is another cooperative multiplayer mode similar to the PvE Salmon Run, but it is much more hectic and the invasion happens in maps within the city. Not much info is available about the mode yet, but the Splatoon 3 Direct suggests that this will be a time-exclusive event that will happen occasionally.

The Tricolor Turf War is the newest mode in the Splatoon franchise. This mode is only available during Splatfests and it allows three teams to fight with each other simultaneously.

The structure of the match is different and is not just an all-out, three-team match. The first matches will be regular 4v4 Turf Wars amongst the three main teams of the Splatfest. Once the final rankings are done, the players of the leading team will be playing as a 4-player group against 2-player duos of the other two teams, making it a 4v2v2 match.

On the map, the leading team will have their camp located at the center, while the other two teams’ camps will be on the opposite ends. The goal is the same as in a regular Turf War; the top group will have to cover the most ground with their ink in order to maintain their team’s overall ranking. Otherwise, the other two teams will have the chance to take away the top position.

Two more competitive modes will be added in the game through a future update.

X Battle will be an available mode for players who have grinded their levels high enough. Expect some very tough competition when joining in these kinds of matches.

League Battles are special hourly battles where the matchmaking depends on your Anarchy Battle rank.

Is couch co-op or split screen multiplayer supported in Splatoon 3?

So far, there is no split screen mode in Splatoon 3. This means that even when playing Salmon Run on a local wireless connection, all players will still need to play on their own Switch consoles and connect with each other through the game’s lobby.

There are a total of 12 stages where players can battle against other players in Splatoon 3. Listed below are the new ones that can be found in The Splatlands.

There will be a new desert-themed stage that will be added in a post-launch update.

There will also be stages from the previous games that will be coming back into Splatoon 3; some of them have even been updated.

Check out this video by Arekkz Gaming showing some Salmon Run gameplay: