New and Confirmed Weapons So Far in Splatoon 3

Paint the town with whatever color you like with these weapons. 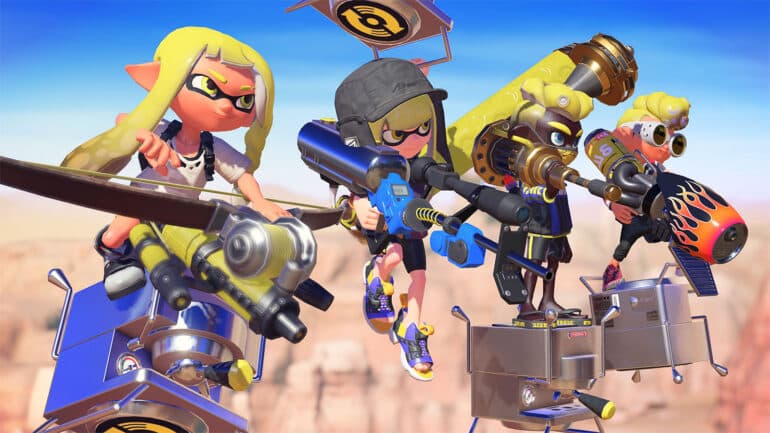 There can’t be a Splatoon fight without weapons, and now that Splatoon 3 is coming soon, fans are excited to see the new arsenal of weapons that they can play with. Not only will the weapons from the previous games be back, but there will also be new weapon types to master, plus some new special weapons that could literally turn the paint tide around.

In this guide, we’re going to take a look at all the confirmed weapons that will come out in Splatoon 3 so far. These weapons are based from what has been seen in the Splatoon 3 official website, Direct, and from the game’s other socials.

Stringers are bows that can shoot out paint, and the distance of where the paint will land depends on the bow’s draw time or charge.

Splatanas are melee weapons that can also be used as a range weapon, thanks to its ability to flick paint towards a target with every slash.

Here’s just a short list of all the weapon types and weapons that will be in Splatoon 3.

Also, it has been confirmed that all other basic weapons from Splatoon 1 and 2 will be available to use in Splatoon 3.

New Special Weapons will be added into Splatoon 3, along with some of the returning ones. These are powerful weapons that need some charging up, but when they are unleashed, they can give a huge advantage to the team. So far, there are 10 new Special Weapons that will be available in the game.

Sub weapons are the secondary weapons that players can use in matches. They are usually deployables that impede, incapacitate, or deal damage to opponents. So far, there are 14 sub weapons in the game, with one of them being a new addition.

Those are all the confirmed weapons so far. With the upcoming DLCs, it is possible that we’ll see more weapons added into the mix.

Check out this video by Atomikbuster showcasing all the starting weapons and sub weapons in Splatoon 3: