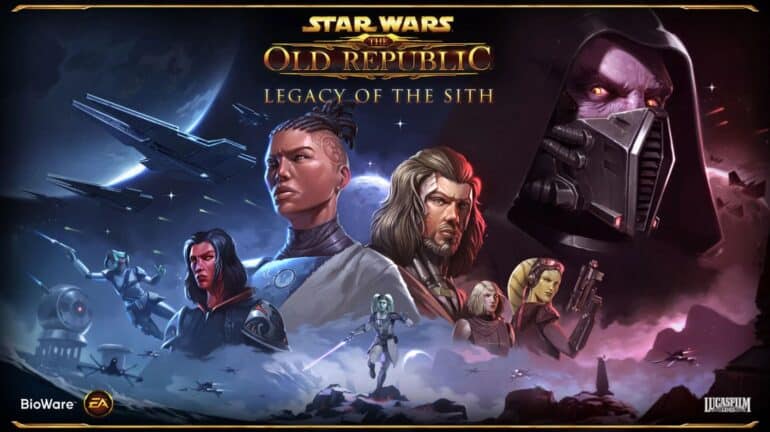 SWTOR – Star Wars: The Old Republic Legacy of the Sith‘s Bioware has recently published an updated launch trailer in honor of the game’s tenth anniversary. Bioware has announced the release date of the upcoming Legacy of the Sith expansion – the first major SWTOR expansion since 2019’s Onslaught – for both new and returning players.

The new flashpoint, new characters, and an increased level cap are all part of the Legacy of the Sith update. The previous expansion, Onslaught, can be accessed by purchasing a token that returns you to the beginning of the current expansion, Invasion. For the first time ever, players will have the ability to tailor their playstyle by splitting the standard class structure into “origin stories” and “fighting styles.”

The next episode of the SWTOR storyline was revealed in a webcast by Bioware. The ocean planet of Manaan, home to the Selkath, amphibious species and the only source of Kolto, a powerful healing fluid – is the setting for Legacy of the Sith.

When will Star Wars: The Old Republic: Legacy of the Sith be released?

SWTOR’s Legacy of the Sith expansion has been postponed to February 15, 2022, according to an official announcement.

Manaan, a planet familiar to those who played Knights of the Old Republic, serves as the setting for the Legacy of the Sith plot. Manaan has already appeared in Star Wars: The Old Republic, but now that the Sith Empire has conquered the planet to seize its rich kolto, it will be a drastically different place.

SWTOR Legacy of the Sith Characters

Many characters from prior storylines, like Darth Malgus, Major Anri, Arn Peralun, Lana Beniko, Tau Idair, and Darth Rivix are featured in Legacy of the Sith.

SWTOR Legacy of the Sith Flashpoint

Elom is a brand-new flashpoint included in the update. Snow-covered Elom is a little-known Sith world with ancient ruins and bright red vegetation.

While in pursuit of Darth Malgus, players arrive on Elom to investigate ruins that formerly belonged to the enigmatic Darth Null. Upon the arrival of an archaeological team from the Republic to Elom, the Empire dispatched commandos to intercept them — but both have now vanished. The flashpoint can be played in either a solo or a four-player mode.

R-4 Anomaly is the name of the new operation, available shortly after the Legacy of the Sith expansion. “Space horror” is the topic of the operation that occurs on a secret research site that has been taken over by a splinter group of Sith cultist splinter factions on the borders of the Empire.

It was previously said that characters are no longer limited in their use of abilities and weapons that are linked with their class. ‘Combat styles,’ or your abilities, are divided into ‘origin stories,’ or the fictional parts you choose to play. Despite the fact that Sith and Jedi can use each other’s powers if they match the unlock criteria, the types of combat available are limited to those involving force-based and tech-based categories. Switching between battle styles will be possible for subscribers.