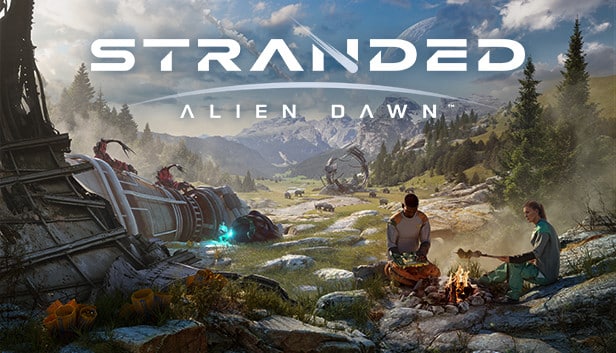 Hey guys, ya boy Ray here with another review, still piping-hot from Early Access. This time, I bring you Stranded Alien Dawn developed by the good folks at Haemimont Games and published by Frontier Foundry.

The game is set in an unspecified alien planet where a group of 4 survivors you select from quite a number crash-land into, and now must team up, utilizing and expanding their skillsets to survive, building shelters and various survival tools which ensure they keep living until rescue arrives at some point.

First, the gameplay. It’s a simulator where you command said survivors to construct small buildings to serve as shelter and somewhere they can store foraged materials such as berries and fruits, meat, metals and other necessities such as synthetic materials and leathers so that the flow of everything is handled easily from construction to completion, starting with the basic wood and scrap metal heading to much more complicated machinery such as solar panels, power poles and freezers to name a few, all in the name of eking out a good life while awaiting rescue.

There’s a few finer details to the characters such as their pasts which hold a few hints on how to put them to good use, such as ex-security guards being able to wield weapons better for hunting and defense or scientists and engineers able to construct stuff easier or learning new tech at a lesser time than others, as well as their mentalities playing into it which you can go at it two ways; Either you sort the issues out fast or use the Funnular Entertainment Way of letting them suffer a meltdown to get to a breakthrough which lasts for quite a while.

There’s also other characters which are medically-aligned which makes healing others faster in order to prevent deaths in the team (something I did not take into account as one of my survivors met a pretty sad end at the hands, er, legs of giant beetles which were aggressive) early on in the playthrough, and while it means one less mouth to feed, it gets worse as there’s one less pair of hands and feet to keep everything running on good speed and when you lose one or two survivors, it starts to feel really slow like a bicycle on a maladjusted drum brake.

Meltdowns come in various forms like meandering to binge-eating to even going berserk and hitting various constructions, and while some are sad to look at, the berserk state is kind of hilarious to look at while one survivor is hitting a nearby construction with little to no success in breaking it. If one survivor dies, they suffer quite a bit, with some if not all survivors going on sad walks or breaking down and crying at the loss, which takes up quite a bit of time and stops production to a grinding halt.

The world is randomly-generated and hosts an expansive range filled with alien plant and animal life that’s ripe to explore and learn about, naming and even hunting them as you aim for a full team’s survival, handling both those that fight back and those that don’t well, rationing animal and bug meat or drying them and turning them to jerky to make then last longer and even make leather from hides you find for clothing or bedding from synthetics.

The difficulty is adjustable for a relaxing and by-your-pace playthrough or if you want to be knee-deep, into-the-thick-of-things style if you crank it up to max, where problems come by the bunch and leaves you in a fast-paced and frantic playthrough in both defense preparation and firefights in a bid to ensure survival for everyone, trapped in a furious planet where you could meet a bad end in the hands of a freak thunderstorm or an onslaught of raging bugs.

The soundtrack is well-made from the start of the game which seems to give players hope that somehow, it’ll be better and they’ll all survive, but it gets somber when a survivor dies and even during the grieving time, especially when they remember the dead and visit the grave after the burial.

Overall, Stranded Alien Dawn is a great game which I personally enjoyed quite a bit, especially planning the settlement area and hunting, managing the storage piles and even upgrading them to respective storage areas like the racks and the freezer.

Stranded Alien Dawn – Early Access Review
Score Definition
You better have to choose if it’s worth spending your spare cash, because it might not be the game for you and it might be for others.
Pros
Researching spaceship salvaging early helps a lot.
Starting gear from the spaceships last really good and could use a bit more laser pistols.
Cons
Starting off nearby a group of angry bugs makes equipping your survivors difficult.
6.5
Justified