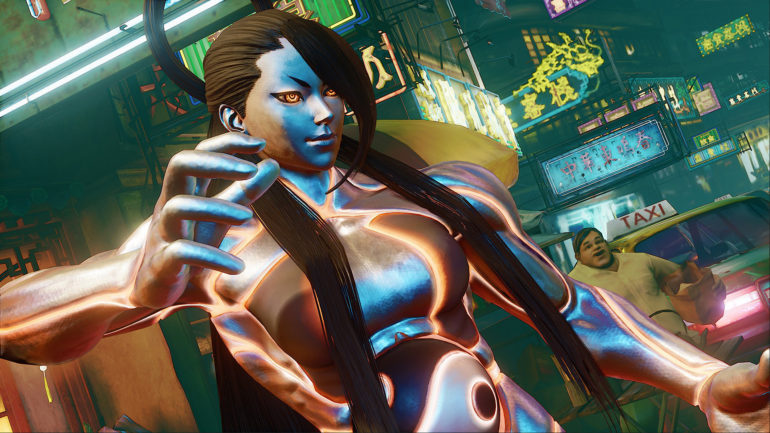 The new character to join the roster is the SFIV boss Seth. The upcoming new version of the action fighting game will launch on February 14, 2020. It will launch on PlayStation 4 and PC. The previously announced character Gill will now be available for those who bought the SFV: Champion Edition Upgrade Kit.

Check out the overview of Seth here:

You may be wondering why Seth looks somewhat different than in Street Fighter IV. In truth, Seth is more machine than human, and was never male or female to begin with. Seth’s exact origins were never made abundantly clear, but this character didn’t make it through the events of Street Fighter IV entirely unscathed. The form you see here is the remnants of Seth’s biological brain paired with the body of Doll Unit Zero. It’s a different look, to be sure, but Seth still speaks with the same voice and craves both M. Bison’s demise and data on the strongest fighters.

In Street Fighter IV, Seth had already collected data on many strong attacks. In Street Fighter V, Seth’s ability to steal opponent’s moves is taken to a whole new level with V-Skill 1, Tanden Engine. By successfully punishing or catching the opponent off-guard with Tanden Engine’s vacuum-like effect, Seth can steal a special move. From Balrog, it’s Turn Punch. From Chun-Li, it’s Lightning Legs. From Sagat, it’s Tiger Knee. And from who Seth hates the most, it’s Double Knee Press. Each of these stolen moves gives Seth access to something uniquely different, but perhaps due to corrupted memory, Seth can only use it once before needing to steal it again.

Rather than stealing, Tanden Booster is all about adding momentum to Seth’s pre-installed specials moves. Tapping this V-Skill 2 will make Seth dash forward from a full screen away. Tapping it again will cancel the dash before it finishes. Inputting one of Seth’s special attacks during the dash will have a variety of effects. The Hecatoncheires rapid punches becomes Hecatoncheires Glide, a move that’s safe on block but leaves the opponent standing and in idle mix-up range on hit. The Cruel Disaster pirouette kick becomes Spin Pendulum, a move that causes a knockdown and can be used for oki. The other advantage of Tanden Booster is that you can combo into it from Seth’s target combo and standing heavy punch.

In Champion Edition, the glory of the Tanden Engine is unleashed with Tanden Ignition. This three bar V-Trigger unlocks teleporting follow-ups for all four of Seth’s special moves. The Hecatoncheires leads into the Titanomachy gut punch. The Mad Cradle dragon punch transitions into the Mad Spin descending drill. The Cruel Disaster morphs into the Cyclone Disaster crescent kick – leaving the window open for a combo extension. And the Annihilate Sword dive kick shifts seamlessly into the Hell’s Gate upturned palm thrust. But that’s not all. Tanden Ignition is also compatible with many stolen moves. Ken’s Dragon Punch into Mad Spin for 14 hits? Sure you can!

Tanden Maneuver turns Seth into a pinball wizard. Upon activation, Seth will summon a large sphere of energy. You can move the sphere in different directions up to four times before the sphere dissipates. The sphere can strike the opponent while moving – with the potential of putting them into a juggle state – or it can be left in place to act as a stationary projectile. Seth can also detonate the sphere early with Tanden Explode. If the opponent is caught by this, they’ll be sent skyward. But if they choose to block, Seth will be left at significant (as high as plus nine) frame advantage. Suffice to say, this two-bar V-Trigger 2 is the more technical of the two and has a lot of set-up potential for players to discover.

Rather than drawing the opponent into the Tanden Engine as in Street Fighter IV, Seth draws them into a large sphere of energy as the Tanden Engine goes into overdrive. In the final moments of Tanden Destruction, the opponent is propelled into the arena wall with significant force. However, if Seth has V-Trigger 1 active, Tanden Destruction becomes Tanden Extreme. This overclocked Critical Art lets us witness the true power of the Tanden Engine as Seth summons a doppelganger to intensify the destructive forces at play. The end result is more damage and a face crushing connection with the fourth wall.

The leader of the Secret Society and a master of elemental balance, Gill has officially graced the illustrious roster with his presence in Street Fighter V: Champion Edition. With the ability to control both fire and ice, Gill’s fierce punch will be engulfed in flames, while his standing roundhouse will hit opponents with a frozen force. Gill can be acquired separately beginning today for MSRP $5.99 / €5.99 / £4.99 or 100,000 Fight Money and will be added to the roster in the full version of Street Fighter V: Champion Edition, available on February 14, 2020.

Gill’s home base, the new “Sun Chase Moon” stage, offers a perfectly balanced locale for players to light up the day and rule the night. This all-new stage is available now for MSRP $3.99 / €3.99 / £3.29 or 70,000 Fight Money and will be included in the full version of Street Fighter V: Champion Edition.

Beginning today, all new V-Skills are being added to every character in Street Fighter V: Champion Edition. There are so many other awesome new V-Skills that we can’t wait for you to try out. There’s M. Bison’s teleporting cross-up knee that’s plus one on block. There’s Birdie’s weaponized bubble gum projectile that he can blow to different sizes. There’s Alex’s new charge that lets him cancel his special moves into each other. There’s Abigail’s rolling tire projectile that he can whack in different directions. And there’s Cody’s high or low dodge that gives him a few frames of strike intangibility before letting him follow up with a hook or sweep. These new V-Skills and the new balance patch changes are available for all existing Street Fighter V owners as a free download beginning today.

As mentioned previously, a new battle balance is available now as a free download for current players. There are a lot of details to share, so stay tuned to find out what changes and improvements have been made to your favorite fighters.