Tap to the Top: A Tap Titans Review 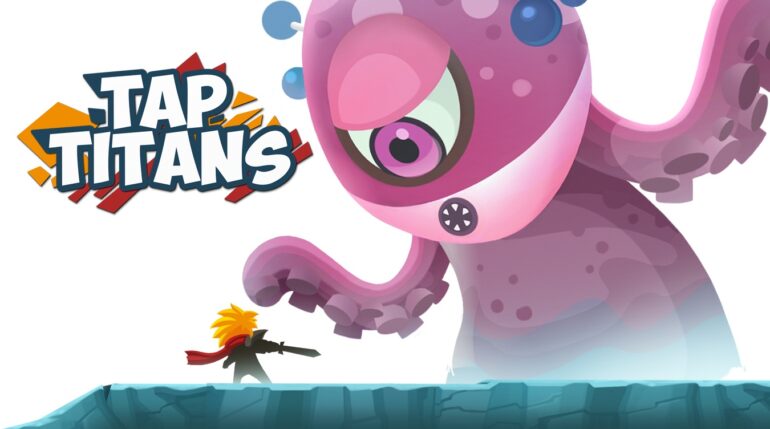 If you are into idle and clicker games, you should definitely try out Tap Titans.

Created by GameHive, Tap Titans is an idle/clicker game that lets you play the role of a hero set on an endless quest to slay giant monsters called “titans”, get stronger, and slay more titans, all of which can be accomplished by simply tapping. Along the way, you will earn gold from the monsters you’ve slain and use it to level up your hero and improve his skills or to hire more heroes, each with their own set of skills, to aid you in your seemingly eternal quest of slaying titans.

Sounds easy and simple? Well, moving our hands in a tapping motion is something we humans can do effortlessly; going through monster after monster with increasing difficulty every level you pass, not quite. You can spend minutes tapping through levels with ease but you will eventually  find yourself in a situation where you tap and you tap and after five minutes or so, you just killed one monster. That may be a record in other games, but in Tap Titans, it is either you didn’t bother leveling up your heroes or you have just reached the point where your upgrades cannot keep up with the titans’ increasing health. Sure, you can leave the game for a while, get some rest and let your heroes passively farm you some gold, but the “boost” that you get from the gold you passively get won’t last that long and you’ll eventually find yourself back to killing titans at a snail’s pace and you probably won’t be able to kill a boss fast enough.

Enter the “prestige” mechanic. It is basically a reset option that you’ll unlock after reaching a certain hero level. What it does is that it resets everything back to where you started except this time, you get to earn another kind of currency called “relics” which you can get from boss monsters to obtain and upgrade certain “artifacts” that would give you a boost in several aspects of your gameplay including damage multipliers, increased critical rate, increased gold drop, etc. With these boosts granted on to your heroes, you can now go on another journey to kill titans faster and reach higher levels. You can go through a prestige a couple of times, preferably after obtaining enough relics for you to unlock the next artifact or until you get stumped once again, and get stronger and faster with each run. After several runs, the game changes from “how far could I go?” to “how far could I go and how fast could I get there?” as the prestige mechanic adds this sort of “beat your own record” game you can play with yourself.

The graphics of this game is colorfully minimalistic, somewhat cutesy, and the art style resembles something like a kid’s art project which works well enough for a game that would be obscured by your tapping fingers for most of the time. There is something about the simplistic visuals that look pleasing to look at even for long hours without going too over-the-top. The background sound tends to get repetitive after quite some time, and we do hope the devs would someday add another option to change the background song in addition to the volume controls, but the game is rich with the sounds of swishing blades, whooshing spells, and the grunts of the titans.

Tap Titans also has a premium currency called “diamonds” which you can purchase or earn through achievements, fairy drops, watching ads, and daily dungeon challenges. You can use these diamonds to get temporary boosts or to instantly revive fallen heroes. Yes, your heroes can die from bosses on certain levels. It’s quite annoying sometimes when you are about to go through a prestige and you postpone it for a couple of hours up to a day just because a boss killed your hero and cuts the amount of relics you would get into half. What is nice about the game, though, is that it is generous enough to give diamonds so often that you could easily get a hundred a day. But if you feel generous yourself, you can always give some back to the devs. Nevertheless, Tap Titans does not heavily rely on its premium currency as it only serves as a way for the player to get boosts and not as toll gates that one must pay first before one can progress.

The game just recently had an update in which players could join tournaments twice a week where participants compete among other players to see who can progress the farthest within 24 hours. This would automatically send the player through a prestige upon joining and prizes such as diamonds and weapon upgrades, a recent addition which grants more power to a hero, would be given afterwards according to the rank they achieve.

To be honest, I don’t like math that much and it probably doesn’t like me either, but there is something about numbers and the idea of raising them higher and higher exponentially while just doing a menial thing such as tapping or clicking that is oddly satisfying to see. Probably because we deeply wish that we could easily earn money just by tapping our tasks away. But reality doesn’t work that way, sadly. So while you are standing inside the train going to work or patiently waiting for your paycheck to come, check your fingers, they’re probably tapping. So why not slide your smartphone under them and play Tap Titans? You can satisfy your need to earn for a while, in virtual reality, at least. Tap Titans is a relatively new game but it is already becoming one of the best games of its genre in its current market.

Tap Titans is a great game to play if you want to kill time or if you need your tapping fix. Being a relatively new game, it has a lot of potential and is gradually developing itself to be more engaging with its new features. A highly recommended game for the idle and clicker game enthusiast and for the casual gamers alike.

Tap Titans is currently available for download for free for Android and iOS users.