A no spoiler hands-on preview of The Quarry. 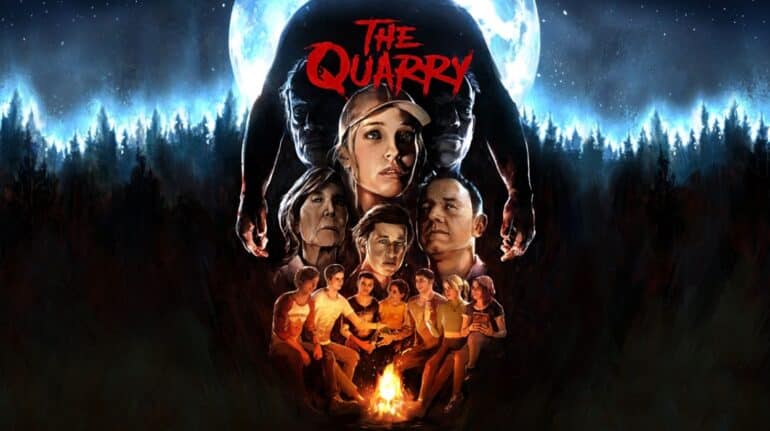 The Quarry behaves much like an interactive horror film instead of a video game. If you’re familiar with any of Supermassive Games’ other works, then you generally know what you’re in for. This is a choice-driven narrative-focused game with little in the way of any actual gameplay.

The biggest difference this time around is that 2K Games is the publisher this time around for The Quarry. It remains to be seen as to what full changes that would bring to the final product, but from the experience of the preview things more or less seem to be business as usual for Supermassive Games.

As The Quarry is a choice-driven narrative game, this preview will contain no spoilers. So whether you wind up becoming more interested or uninterested in the game, know that you’ll be going in with a fresh mind.

The Quarry seems to be in love with the 80’s aesthetic. Despite one of the camp counselors clearly owning a smartphone (as shown from the official announcement trailer), the game’s interface and other hardware all seem to date back to the 80’s and at first, I couldn’t quite place what time period the game took place in. It very much feels like a modern setting that’s stuck in the past. And appropriately so as the game does feel like a homage to famous slasher films like Friday the 13th and Sleepaway Camp.

There are nine playable characters in The Quarry who are camp counselors. Their motion capture actors whose physical appearance they’re based on are experienced Hollywood actors from horror films so there’s some actual talent to deliver the lines. Since this is only the game’s preview, it’s difficult to say if all these characters will shine after spending some time with them. The preview didn’t really dive deep into any of the cast so most came off as forgettable. By the end of the preview, the only interesting characters were Kaitlyn and Dylan who showed a sense of duality that felt absent from the other counselors. The preview only showed 7 out of the 9 counselors so the jury’s still out on the remaining two.

The acting of the cast benefits from the smooth realistic animations that we’ve become accustomed to in Supermassive Games. The Quarry doesn’t fall short in looking aesthetically pleasing but lip sinking issues were palpable at certain moments. The cheesy acting certainly is in line with the 80s films which may have been on purpose.

As mentioned before, The Quarry is a choice-driven narrative game with all the drawbacks that a choice-driven narrative game usually has. Very few people take pleasure in quick-time-events and when a game leans heavily into solely focusing on QTE as its core gameplay loop, that makes it straining for players to replay the game even if offered multiple choices that lead to different endings. It seems Supermassive Games caught wind of this because they’re introducing an all new Movie Mode that lets the game play itself while people watch it like a film which is going to be available on the game’s full release.

The QTE sections of The Quarry function much like in the previous games from Supermassive. Pressing the on-screen prompt lets the character do something. It is possible to ignore the QTE prompt as they aren’t always the right choices. This is also the same principle for the game’s “combat” where guns can be shot which have lasting consequences.

The Quarry features quite a few areas and even has a map that shows where the counselors are at any given moment even when they’re not on the screen. However, the world isn’t explorable and there’s limited room to move around in certain given moments. Unlike Until Dawn or House of Ashes, premonitions in The Quarry revolve around finding Tarot Cards which can be used at the end of the chapter to catch a glimpse of the future. There are also other Collectibles like Evidence which apparently have a story reason as the in-game tutorial videos claim that you can absolve yourself from a crime by finding them.

The choices in The Quarry are quite binary. Whenever presented with a choice, the character being controlled can choose between two options. And it isn’t very reassuring to see that despite making different choices, the preview doesn’t diverge by much.

There is danger lying in the woods in Hackett’s Quarry and Supermassive Games is a virtuoso when it comes to providing tension. However, the monsters in The Quarry that are stalking the counselors just weren’t scary in the preview. They were intriguing and there’s genuine curiosity in finding out their origins, but there’s more to be desired in the design.

Supermassive Games does use licensed music for The Quarry. The developers have thoughtfully added the option for streamers to block out licensed music. There’s also an option for couch co-op in the main menu though this was unavailable in the preview. You may also co-op using the game’s online features.

Compared to previous games from Supermassive, The Quarry has made quite a few improvements and the developers stick to what works. The preview has shown that the game tones down the action Hollywood set piece that was House of Ashes and deviates away from the bleak nature of Man of Medan for a more traditional horror experience with a colorful cast.

The Quarry preview was an exciting experience and one that faithfully recreated the atmosphere from the old 80’s slasher films. Supermassive Games seem to be crafting a narrative similar to Until Dawn which was the first and best of their works. One can’t help but be excited about the direction The Quarry is heading.

Check out the official announcement trailer!