The Walking Dead: A New Frontier: Ties That Binds – Review 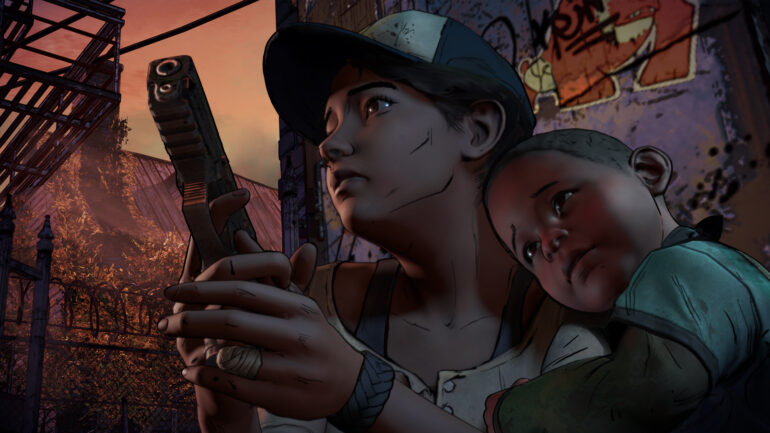 Telltale’s The Walking Dead – A New Frontier is finally here, and the game did not only bring in its usual damaging and depressing story sequences, but it also upped its content by a huge margin. If you’ve played the first and second installment of the game, then you can surely notice a lot of changes with the game’s elements.

Telltale has been using the same engine they used on the past titles they made, and only up until now in A New Frontier that they started using a new one. I don’t really mind if they’d keep on using their old engine or switch into this new one, because, you know, they are telling a story, not showcasing how badass their graphics are, or how awesome their gameplay is. The graphics in-game have been upgraded, but not totally. You can still see traces of cel shading here and there, but the 3D effect is starting to take over in the game’s graphics. This isn’t really a bad thing about the game, but it also removes the “comic” vibe you get by playing the game. Then again, it doesn’t really matter that much. What matters most is how Telltale superbly delivered the story of the first two episodes they released.

Let’s talk about what’s new in the game first. Have you ever heard of “crowd play”? If you’ve already play Telltale’s Batman, then you probably already know what it is. For those who haven’t played the Batman series, “crowd play” is a new feature Telltale added in-game that lets the viewers, be it your friends or family, vote on what decision to make via their mobile devices to further help you in your decision-making while playing the game (I don’t really recommend playing it with your family, though, as there are some questionable things that’ll happen in-game). 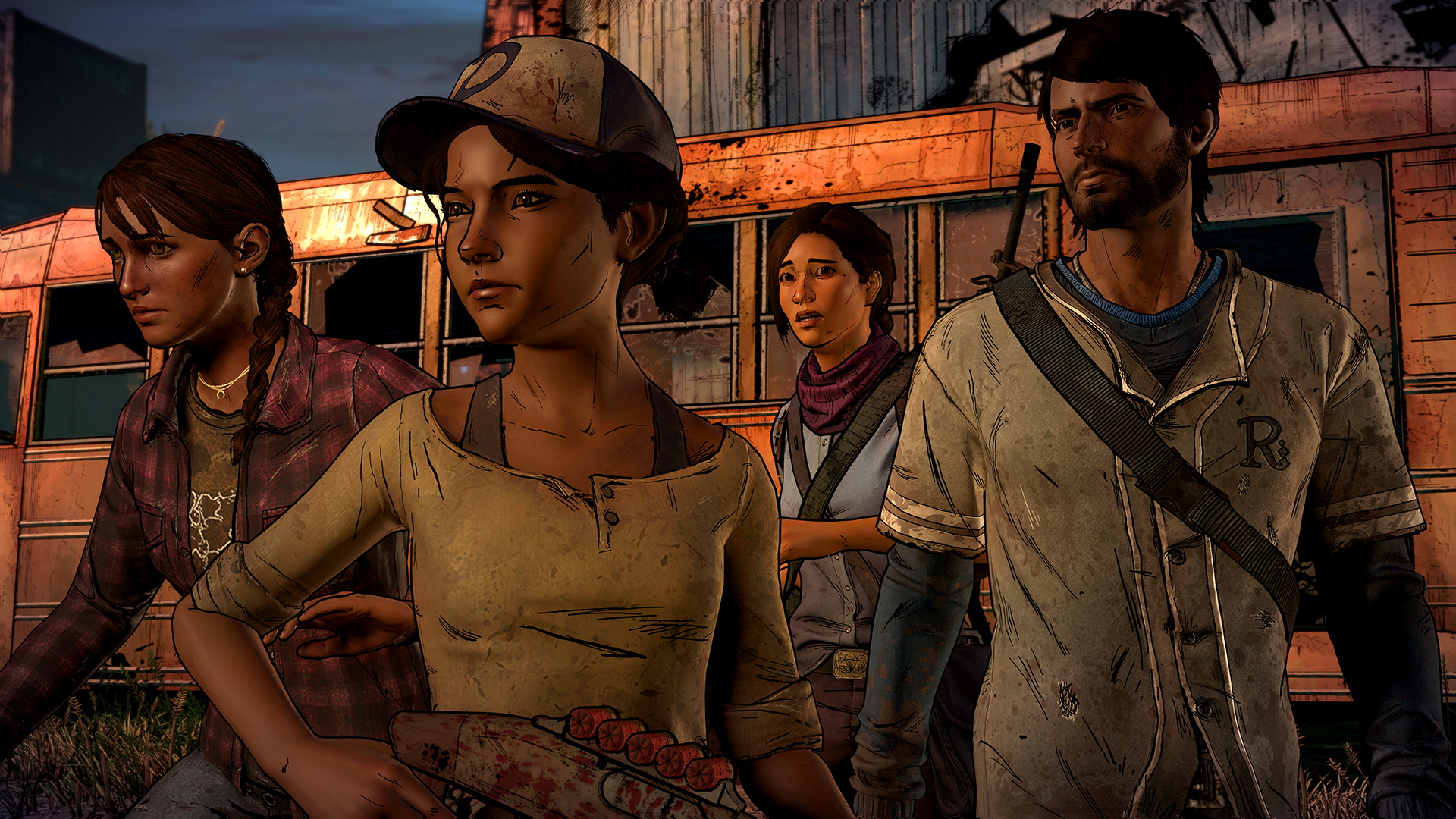 I personally would not enjoy this feature since I play my games alone most of the time, but there’s nothing wrong in doing so, too, anyway. The graphics have upgraded, as what I’ve previously said, making the environment more beautiful than it already is. I’ve also recently noticed the blur from focusing on a character or a specific area, too, which is a great addition to the upgrades the game had. You can still view the decisions you made on the extras menu, and can adjust the game’s settings in the, well, settings menu. You can also pick on which OS to run the game (Windows 8 or 7), which is great since it optimizes your gaming experience based on the option you chose. The loading time the game does every time it updates its content may take a while if you’re connected to the internet, though, so I guess you should patient on this one. There’s also the cloud save where you can save your data on Telltale’s cloud, and play the game on another PC in a different place with your save data.

The most interesting part of the game though is the ‘Story Generator’. If you haven’t heard yet, the game’s story generator lets you recreate a story for Clementine during the past two seasons of the Walking Dead. This is a really great help you’re getting from the game if you’ve lost your save files from the past Walking Dead games and is too tired to play them again. Definitely a plus on the game’s new features that has been added. The environment in-game is also stunning. It’s been three seasons already, and the level of detail Telltale has poured in is actually impressive. Nature has started to envelop and devour the once civilized cities of the game, and I can’t help but appreciate the added details Telltale pitched in into this game. The game also incorporated its Michonne title’s updated button-pressing gameplay, which really lets you enjoy the game more cinematically.

In A New Frontier, how the story goes is really affected by how you tailor it. The smaller decisions you make don’t really make that much of an impact (although it affects each character’s behaviour towards you), but the bigger ones surely impacts the story strongly. I’m not sure if the illusion of choice is still there, since after playing the game, I felt like the decisions I made really had an impact on how the story went. Maybe a couple more episodes will change this observation, though, but I have high hopes of a multiple-ending story on this one, kind of like how season 2 ended. 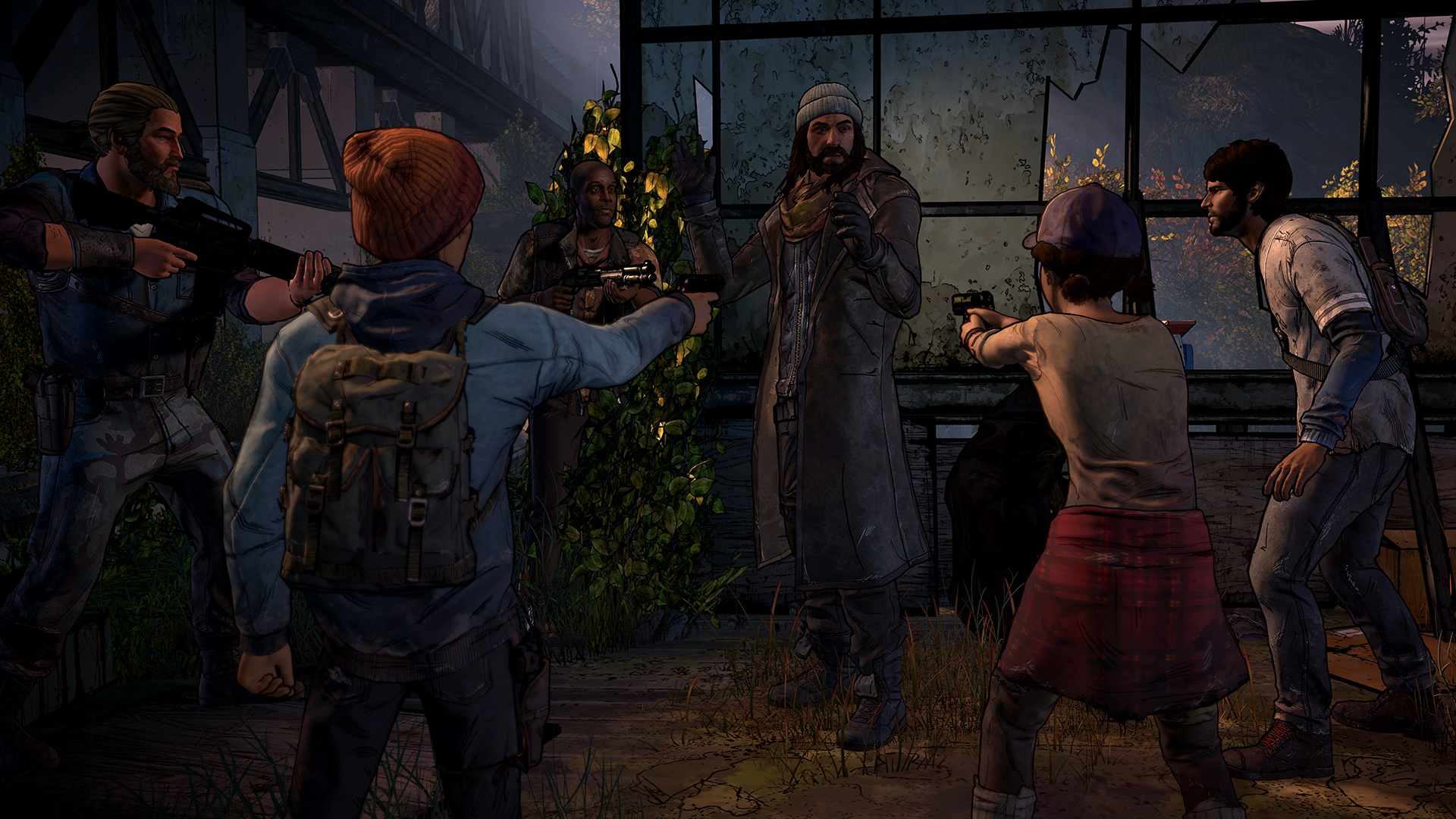 The first episode ended up with a huge bang, making it an explosive intro for the game. The second episode ended with a huge plot twist that I personally didn’t really get surprised since I kind of already know what was gonna happen in the game eventually (since I was in the zone with my sleuthing skills). Ultimately, the hype the game brought was well-deserved. There are a few issues, though, like when you turn on the subtitles, there are some words, phrases, and even sentences that’ll suddenly appear as a subtitle, but the character speaking isn’t really saying anything. There are times when the game gets laggy a bit, too, when you going in certain areas with mist. Also, the mouse moves weird when you reach a corner. It doesn’t really move that much when it reaches a corner, which makes you move your character to a specific area to properly hover your mouse (though it still shakes and does weird movements, though). These are some issues I noticed, and hopefully Telltale would be able to clear some of these things out.

As for the for story, I got a bit disappointed that I wasn’t going to play as Celementine. You are to play as Javier, instead. As a fan who played both the past season, I was kind of really looking forward on playing as clem, but after having played the two episodes, I was able to appreciate more on what the game gave me. Clementine became such a badass, so I suggest you stick your eyes onto Javi. You get to play as Clemetine on some of her flashbacks, though, but it really doesn’t last that long.

All in all, the game was able to live up to its hype. It was a rollercoaster of feels that I experienced after having played the first two episodes. There might be some times when the story gets a little slow-paced, but it doesn’t really matter since things would just suddenly happen and would always catch you by surprise. The environment matches the post-apocalytpic feel, the background music fits well depending on what situation you are in, and voice actors are just too good on what they do… Well, maybe except Javier’s grandma. Her voice acting kinda sounds forced, to be honest. The controls are really simple which makes you focus more on the story. A New Frontier was able to deliver the first two episodes beautifully and gracefully, and although it may have some issues regarding its gameplay, it still has its fair share of plot twists that’ll surely leave you surprised, and your jaws hanging and with this, I give episodes 1 and 2 a score of 8.9.