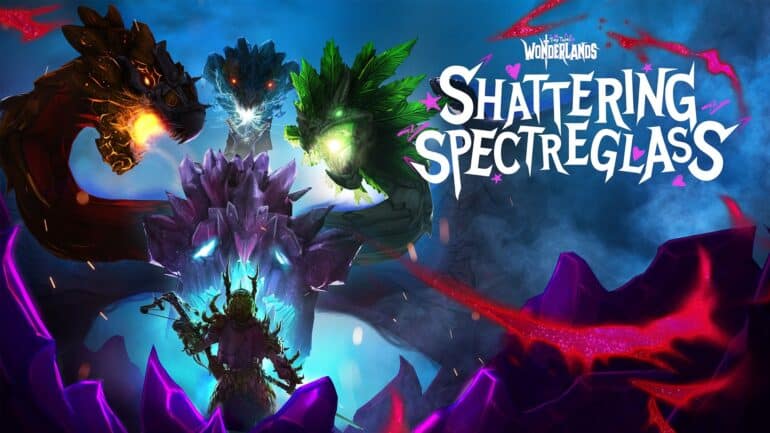 Tiny Tina’s Wonderlands Shattering Spectreglass is out now on all platforms and will introduce the new Blightcaller class. It also adds a new dungeon linked to the Vesper’s darkest secrets and more options for Character Creation.

The new DLC Tiny Tina’s Wonderlands Shattering Spectreglass introduces the new Blightcaller class, which wields the noxious essence of swamps. They can suffocate enemies with poisonous Plaguestorms and summon vengeful spirits from their Bog Totem turret. They are specialists when it comes to dealing elemental damage, especially with Poison, and can get boosts to their elemental damage whenever they apply a Status Effect with the help of their Class Feat called Whisper of Rot. Access this class by creating a new character by slotting it into the Secondary Class of choice for an existing character via any Quick-Change Station after completing the game.

More Customizations for the Fatemaker

With Tiny Tina’s Wonderlands Shattering Spectreglass, players can now choose more options to customize their Fatemaker and that includes the new voice option called The Grim voice. The starting stats can be further tweaked too when making a new Fatemaker thanks to the four new backstories to choose from which are Nerfed by the Bunkermaster, Clownblood, Apprentice Barnacle Scraper, and Street Urchin Success Story.

Shattering Spectreglass is the fourth Mirror of Mystery. Take this chance to look into the memories of Vesper who has been plagued by visions of Redmourne the Trivern. This monster can grow multiple heads and eats fear as nourishment and gains power from lost souls. Bring down this monster once and for all to help Vesper escape her past.

This DLC will give players a chance to explore a more difficult dungeon and farm higher-tier loot that can help them complete the main story. This is available via the Season Pass or individual purchase.

Redmourne will recoup and regenerate his heads that would breathe elements for three consecutive weeks. Each version will get tougher to fight, but that will only add more Legendary gear to the loot table, so it is a good reason to come back and beat him again.

Check out Redmourne’s schedules below:

Players who have not followed the schedule will have to beat each form consecutively. Vesper will share more details about Redmourne after defeating him and also give information about herself in the process.

Completing Shattering Spectreglass at least once will add four unique level layouts and the Redmourne boss fight to the pool of Chaos Chamber possibilities.