A guide about Apophis in Tower of Fantasy. 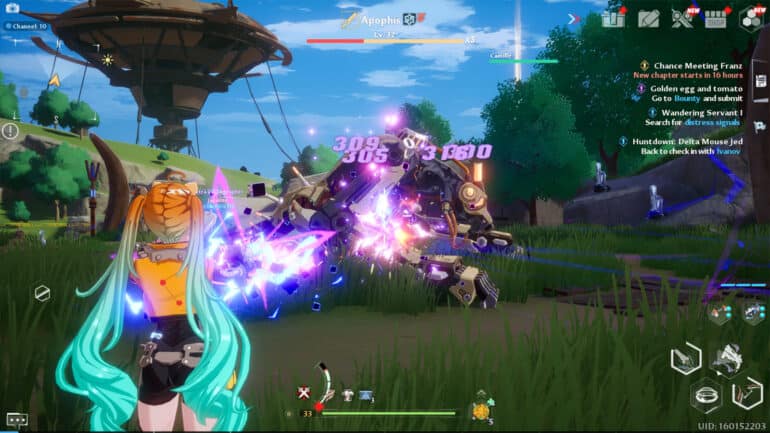 Apophis is one of the world bosses that players can challenge in Tower of Fantasy. Despite being a boss located in one of the early parts of the game, it is quite the formidable boss to defeat that usually requires the cooperation of three or more players. But due to the loot that it drops, dedicated players will farm this boss all day.

In this guide, we will be talking about Apophis, share some details on how to survive the encounter by learning its attacks, and look at other details that will make the boss encounter worth the hunt.

Apophis can be located in the North Highlands of the Banges region (coordinates -464.9, 5.3). The closest spacerift is the one located at the Black Market, then head southeast to reach the arena. It can spawn around 30 minutes since its last slain time.

Apophis is weak against frost attacks.

Apophis is a very mobile boss that can leap across long distances to pounce on a player, thanks to its Panthera genes. It also has wide claw swipe attacks, and its devastating ultimate attack can cover almost the entire arena, making it hard for players to avoid getting hit.

Apophis will prepare its claw by winding it back, while a hit marker appears on the ground where the claw will swing. The range of the swipe is wide, almost covering the area on its entire side, but its distance is not that long, so simply move back from it as it prepares for the attack.

Apophis will lower its body as it prepares for its pounce once it finds its target. It can leap long distances, but the wind up time is telegraphed and can be easily avoidable by side stepping away from its path. Be mindful not to lure it way too far from the arena as the leap might cause it to go out of bounds, which will make it reset its HP back to full.

Apophis will dig its claw to the ground as it eyes out its target. It will then fling a boulder towards its target at fast speeds. It is quite hard to outrun the boulder as it flies fast, so the best way to avoid it is to dash away from its flight path at the last moment.

For its ultimate, it will raise its claws to the sky as it charges up its orb of energy. While charging, smaller orbs of energy will fly out around it in random directions. Once it is done charging, it will then throw its big energy orb towards its target, dealing AoE damage to its surroundings once it hits or it lands on the ground.

Be careful when it is about to throw its finisher as it can quickly do as much as a 180 turn before chucking its orb. It is better to try to get as far away as possible without straying too far away from the arena, or make sure that someone tanky stays in the arena to prevent resetting.

How to prepare for Apophis

It is recommended to have at least 3 to 4 people challenge Apophis to make sure that the aggro can be passed around often. Its attacks can deal massive amounts of damage and can knock down a player in 2 to 3 hits, so it’s good to have someone to help peel off its aggro. A healer is recommended, but can be substituted with just eating food that has high HP recovery rate (>10,000 HP).

Meryl, Ene, and Hilda are the recommended Simulacra to bring along as their weapons deal Frost damage and have high shatter scores that can help break Apophis’ shield quickly.

Can Apophis be solo’d?

It is possible to go 1v1 with Apophis, however this requires so much preparation and time, plus the player’s CS must be way above the difficulty curve to outmatch the level scaling of the boss.

When slain, Apophis itself can drop materials needed for vehicle maintenance, weapon and matrix upgrading, plus it will unlock the boss chest which can drop the following:

Defeating Apophis for the first time will also unlock its achievement with the following rewards:

When farming Apophis, we recommend to have the following to maximize the hunts:

Hunting parties with friends of crewmates are helpful as having someone to coordinate a hunt with is less time consuming than waiting for other players to join in the hunt.

Type III chips increase the amount of rewards that you can get from the boss chest, which can also increase your chances of getting the rare SSR rewards.

Because of its spawn rate, it’s better if you can go on a hunting route including the other world bosses in the other regions to pass the time. Another method is to jump to another channel by clicking/tapping on the Channel button and typing in the channel number. You can only switch channels once every 30 minutes, so it’s good if you are a part of a big crew who has other players in different channels so that they can scout the other channels beforehand.

Check out this video by Pupsker showing an Apophis boss fight: