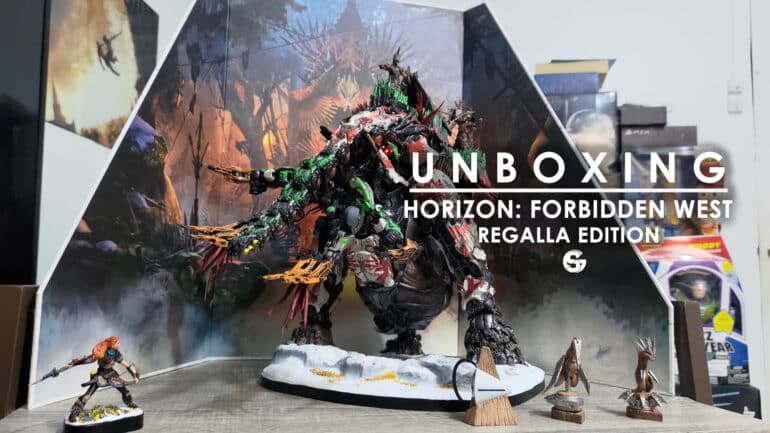 Through the tremors we feel a menacing machine is coming, one that will devour every soul in its path, a creature we haven’t faced before, are we prepared? Or are doomed? A humongous machine makes the forest dance and waves with its heavy stomps; it’s coming, the one they called Tremortusk.

A huge mammoth-like machine that can house a small shelter on its back, a memory we utmost remember in the Lord of the Rings: Return of the King, the Mûmakils.

The Tremortusk in Horizon: Forbidden West should never be underestimated. Its thick metal armor can withstand anything that we throw at it. It’s tough, it’s big, and it’s deadly. Its trunk, covered with armor, is supported by its tusks plastered with lethal spikes. The Tremortusks aren’t to be messed with in the Forbidden West, even a Thunderjaw is outmatched by such a dreadful machine.

And we’re grateful to have the honor to unbox such a terrifying piece of machine from a big box we snagged at a local retail store here in the Philippines for only Php. 12,990.00 (that’s about USD $259.8).

What is the Horizon Forbidden West Regalla Edition?

The Horizon Forbidden West Regalla Edition houses a uniquely styled Tremortusk, painted by Regalla’s own militia to distinctly identify them as rebels in the Forbidden West. What does the package include? Continue reading.

Here’s an overview of what’s inside the Regalla Edition:

You get a total of 16 contents, both digital and physical.

There are also 2 art print cards, a canvas map, and the mini art book. Plus, the digital soundtrack and a digital copy of the first Horizon: Zero Dawn graphical novel titled The Sunhawk.

The package also includes actual replicas of the Sunwing and Clawstrider Machine Strike pieces. And now I get to own a replica of the Focus that lights up!

There is always a second box when it comes to PlayStation first-party exclusive collector’s editions, most, if not all. This gives that premium feel to them as you don’t get a sturdy second box that houses the actual statue or content. You can see the effort the team put to design such amazing artwork on those pieces of cardboard.

Immediately after opening the first layer of boxes, the next one has Aloy’s face wrapped around the box and a few of the Clawstriders in the back. I do love the art direction of its box’s design as it truly makes the entire unboxing experience special.

The Aloy box is a sturdy one, and the only way to open is by raising it. You then see the encaged Tremortusk, and right behind it is a deployable background for your photo op needs.

A compartment can be pulled off just below Tremortusk, and that’s where you see both the steelbook (inside are the game’s code and DLC) and mini art book. And just beneath the two are the Sungwing and Clawstrider Machine Strike pieces carved from actual wood, the Focus replica and its wooden stand, the canvas map, and the 2 art print cards.

How big is the Tremortusk statue?

The Tremortusk statue is 14.4″ inches (36.5cm). It includes attachable posable trunks and tusks. While there’s a limit on the articulation of the said parts, it’s still amazing that you’re able to move them, and give the Tremortusk a killer pose; you also have a small Aloy statue that you can pair with the Tremortusk if you want to capture memorable moments.

Additionally, you can turn on its LED eye-lights. Similar to how machines react to Aloy in the game, there are 3 modes: Neutral, that’s the blue colored lights, yellow if it’s alerted, and red for combat.

Comparing the Regalla Edition’s Tremortusk design to the Collector’s Edition variant makes it the former one hell of a design. Its tribal paint job gives the Tremortusk an intimidating look and personality.

While there are a few notable ones like Fallout 4’s PipBoy, Metal Gear Solid V: The Phantom Pain’s Bionic Arm, The Regalla Edition gives statues a distinct vibe that you’ll immediately feel after you’ve unboxed it.

If you wish to check all Horizon Forbidden West editions, we’ve got that covered just for you and a few guides.