V Rising Scrolls: How to Get and Use

A guide on how to get and use Scrolls in V Rising. 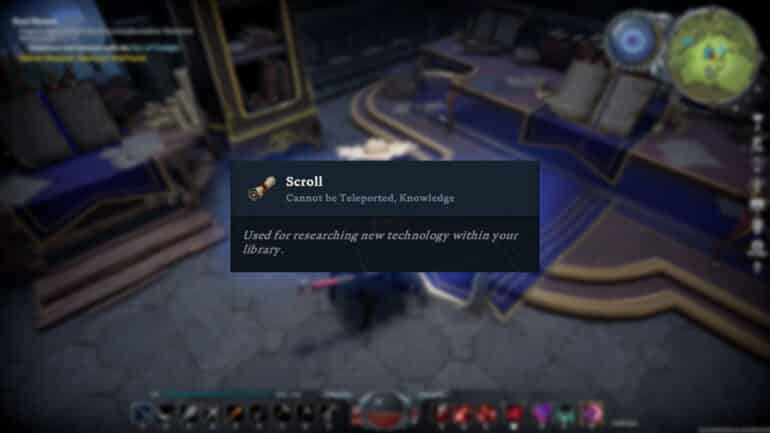 Scrolls are one of the key farmable materials in V Rising. It is the higher tier of the Paper and it is mainly used to unlock recipes for structures, gear, and consumables.

In this guide, we will be talking about the ways on how to get and how to use Scrolls.

How to Get Scrolls in V Rising

There are two ways of getting Scrolls:

Though crafting Scrolls from a Paper Press is the easiest way to get them, getting to that point itself take a while and, not to mention, also requires a lot of Scrolls.

So upon reaching the point that you’ll be needing Scrolls to unlock more recipes, you will have to settle with farming them out in the world first.

Scrolls can be generally found from anywhere in the Dunley Farmlands. They can drop from +Lv.35 enemies and they can also be found from smashing crates and barrels that are scattered in the militia camps and villages.

One of the best places to farm for Scroll is at Dawnbreak Village, at the east side of Dunley Farmlands. The houses in this small village have around 1-2 drawers, cabinets, or shelves that usually contain around 3-5 Scrolls. Raiding this village alone can net you of an average of 35 Scrolls per run, that includes the ones that drop from enemies that patrol the village and ones from smashed breakables.

As mentioned, getting to the point where you can craft Scrolls takes time and also a lot of Scrolls. First off, you will have to craft the Study by defeating Nicholaus the Fallen (Lv.37) to get its recipe and crafting it using these materials:

Once that’s done, you will then have to spend 75 Scrolls to unlock a recipe in the Study. Recipes are randomly unlocked, so depending on your luck, it may cost you between 75 to 3,000 Scrolls before you get the recipe for the Paper Press.

Thankfully, the unlocking process does not repeat and cause a duplicate recipe. Moreover, once you start farming or just going through the camps and villages, you’ll eventually find books that unlock recipes, which may include the blueprint for the Paper Press. This will significantly lower the amount that you need to farm in total, plus any duplicate book can be salvaged at The Devourer for 15 Scrolls.

Once you have the Paper Press, you will then have to fight Frostmaw the Mountain Terror (Lv.56) at the Hallowed Mountains to unlock the Scroll recipe. Once that’s done, you can then start crafting Paper and Scrolls using other materials at the comfort of your castle.

Crafting Scrolls will require the following:

How to use Scrolls in V Rising

We’ve already discussed one of the uses of Scrolls which is to unlock the mid-tier recipes at the Study.

The other use of Scrolls is as a crafting material to create Schematics which is required to unlock the higher tier recipes at the Athenaeum.

Schematics can also be crafted at the Paper Press using the following materials:

So in case you have already unlocked all the mid-tier recipes and you still have a lot more Scrolls left in stock, use them to create Schematics.

Check out this video by Redlaf talking about the importance of Scrolls in V Rising: