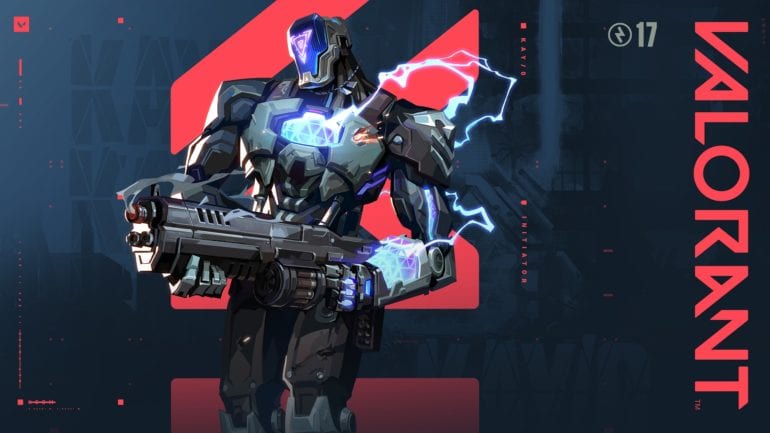 KAY/O is actually a machine of war that was built for a single purpose: to neutralize radiants. He has the power to suppress enemy abilities, cripple his opponents’ capacity to fight back, and secure him and his allies the ultimate edge in battle.

(E) ZERO/point
• Official Tool Tip
o EQUIP a suppression blade. FIRE to throw. The blade sticks to the first surface it hits, winds up, and suppresses anyone in the radius of the explosion.

(Q) FLASH/drive
• Official Tool Tip
o EQUIP a flash grenade. FIRE to throw. The flash grenade explodes after a short fuse, blinding anyone in line of sight.
• Notable Mechanics
o Right Clicking the flashbang, throws a charged flash, causing it to only have to cook for 1 second, as opposed to left click throwing a flash that cooks in 1.6 seconds.

(C) FRAG/ment
• Official Tool Tip
o EQUIP an explosive fragment. FIRE to throw. The fragment sticks to the floor and explodes multiple times, dealing near lethal damage at the center with each explosion.

(X) NULL/cmd
• Official Tool Tip
o INSTANTLY overload with polarized radianite energy that empowers KAY/O and causes large energy pulses to emit from his location. Enemies hit with these pulses are suppressed for a short duration.
• Notable Mechanics
o While Overloaded, KAY/O gains Combat Stim
o If KAY/O is killed while overloaded, he is downed and enters a destabilized state, allowing allies to stabilize his core and revive him.

Character Producer John Goscicki shared more details about KAY/O. He revealed that it was their goal to add something that was familiar to traditional FPS players, but had elements that made it uniquely fit within the game.

KAY/O was actually the one that the dev team started developing after they launched the game. He also has some fun relationships with the roster, so you might find some easter eggs.

KAY/O Game Designer Ryan Cousart shared that aside from what Goscicki said, the team wanted to push for some really intuitive and almost back to basic type of inputs. They want FPS players to take some of their common mastery that they got from other games in this game too, which would make it an intuitive way to access the outputs of the character’s kit.

Designing KAY/O and his simplistic inputs was to make players think of the map and be able to see geo and make decisions based off of it.

Goscicki revealed that their inspiration for KAY/O was a gif of flashbangs being thrown in other FPS games. Cousart on the other hand gained inspiration from Terminator I, Robot, and Chappie.

Couasart did say that he was inspired by the games that they have grown up with that use grenades. “The inspirational thing about these grenades is that they have this Newtonian physics to them that is easy to intuit, making it easy to access and master different outputs in these tactical or militaristic shooters,” he said. There was also an interesting story that when he presented the idea without even known the Narrative Lead on KAY/O Joe Kileen had just written a blurb extremely similar to his before he joined.

The suppression ability was represented by throwing a Jett knife and have it explore, shared Goscicki. When they were mocking up the ability, they were saying that it had to stay as a knife because it would not make sense as anything else. They tried to discover the technology that could back up the exploding suppression knife and why the heck would a robot need it.

Goscicki then revealed that they needed to make a better feedback for players having affected by Suppressed, which meant they could not use an ability. They added a “I can’t use that” VO line whenever the players try to use an ability while being suppressed. There was once instance that Viper was suppressed but she was trying to cast. The end result was Viper still saying “I can’t use that” but it was repetitive like she was beatboxing, but doing it quite poorly.

Cousart shared the downed state of KAY/O, which was a cool mechanic. The character would overload and turns into a metal ball. During a meeting, they made it cut from the kit, but he could not remove it right away. So, as a send-off to the mechanic, he lowered the Ult Points to 5 and started doing the rescue missions in the design playtest. For full two days, they had fun watching it and decided to keep the mechanic instead of cutting it. With a few tweaks, it was all good and it gave them a big opportunity to give KAY/O his killer robot fantasy.

The making of Suppression actually has an interesting story behind it. Here’s how Cousart tells it:

During the prototyping phase of KAY/O, I had a bit of a hard time piecing together mechanics that we felt were cohesive for selling the fantasy of this agent. We knew our design goals and the audience but I think I was trying to get a bit too fancy with some of the mechanics. I started having these late night sessions with Max (Orcane), where I threw a bunch of paths and he would help me figure out which of them were dead ends. I remember, one night, we had just kind of started talking about some of the goals and one of us had said, “eff abilities man, I just wanna frag,” which is how we got to Suppression being what it is today — allowing players to only have to worry about enemies shooting guns at them without having to worry about their abilities.

Goscicki hopes that everyone would enjoy fragging with KAY/O. They are excited to see how players will utilize suppression and for some clutch revive plays.