Just who is The Stranger and why is he hunting Kratos? 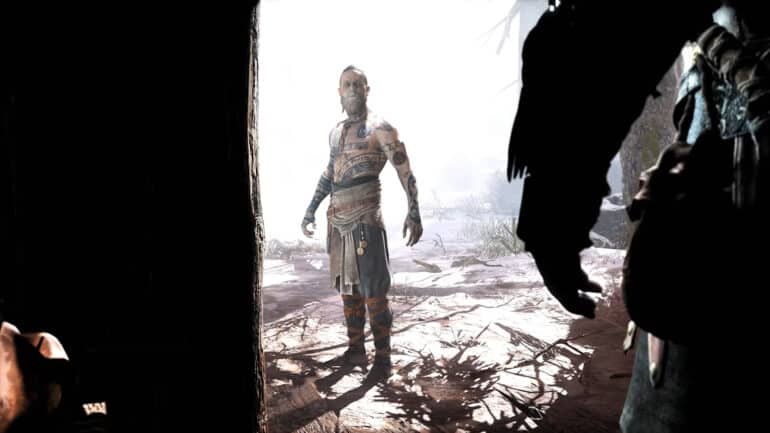 The Stranger is the first boss fight that comes at you at the early part of God of War. He is this sort of a deranged character that suddenly appeared in Kratos’ doorstep and eventually became the main antagonist to Kratos in God of War.

In this guide, we’ll take a look at who The Stranger is and what is his character’s significance in the game’s story, as well as his origins in ancient mythology.

Who is The Stranger in God of War?

The Stranger is actually Baldur, one of Odin’s sons with Freya. In Norse mythology, he’s actually Frigg’s son, but Freya and Frigg’s characters are often intertwined and the ambiguity sometimes show both as the same character. He’s also considered as the God of Light, has a kind character, and is loved by everyone around him, which is portrayed as almost the polar opposite in the game.

In God of War’s story, he was sent by Odin to Midgard to hunt down the Jötunn Guardian, who turns out to be Laufey, Atreus’ mother and Kratos’ second wife. Little did Baldur know that Laufey died just a few days before his arrival and has mistaken Kratos to be the guardian.

Baldur’s confrontation escalated into a fight with Kratos, during which it is revealed that Baldur also has godly powers and cannot feel actual pain. In a later part of the story, it was also revealed that Freya put a spell on Baldur to make him invulnerable to any physical or magical threats.

Baldur wasn’t fully invulnerable as he’s weak to mistletoe and to counter this knowledge, she casted another spell to prevent even Mimir from speaking about it. However, this spell had a side-effect that also made Baldur unable to feel anything, not even the most mundane feelings.

This affected Baldur’s mental state and has also caused him to bear hatred towards his mother for giving him such a curse.

How to defeat The Stranger – Boss Fight

This first encounter with Baldur is actually more of an interactive cinematic, however there is still a possibility to of losing if you’re not careful. This fight goes down in three phases, with Baldur getting more aggressive in every phase.

The first phase starts when Baldur starts to retaliate and show his real strength. In this phase, Baldur acts more like a punching bag that fights back occasionally. You’ll mostly be dealing damage to him with your axe at this point.

When he prepares for an attack, his tattoos glow up a split second prior, so this is a good indicator to either dodge or counter. He will either do a dash punch which you can counter with your shield, or a ground pound that shoots a running horizontal shockwave, which you can evade.

Just when Baldur is about to lose all his HP, he tops himself up to full health and the fight progresses to the second phase. Kratos will get punched through a rock face where he’ll then start charging up his Spartan rage. While enraged, you can wallop Baldur with punches which can also interrupt him from doing his own attacks.

In this second phase, Baldur moves quicker by dashing and attacks more frequently than before. Prepare to evade and time your counters, especially when your rage state is over. The second phase ends when Kratos whips Baldur towards a boulder and subsequently crushes him with it.

Baldur once again rises up and throws the boulder over at Kratos. The two get into a standstill which creates a giant crack on where they stand. Baldur uppercuts Kratos sending him flying, more punches were thrown up in the air, then Baldur kicks Kratos down into the crack in the ground.

You’ll get a bit of respite as you climb your way out of the crack. Baldur will be waiting at the top who then kicks you over to the other side of the crack. During Baldur’s dialog, you’ll heal up your wounds. Baldur then jumps towards you, starting the final phase of this fight.

Baldur will be more aggressive in this phase, performing his attacks in succession. His heavy punch will have a follow up punch, which you can block for a counter attack. He’ll also do a ground stomp by jumping up and crashing down into the ground, creating a small AoE. Simply move away from where he jumped to avoid getting hit.

Timing your counter attacks will be the best way to deal damage to Baldur because he’ll leave little to now windows in between his attacks. Once Baldur’s HP goes down to a certain point, Kratos will once again whip him towards the huge crack this time. After a bit of a struggle, Kratos manages to snap Baldur’s neck and throw him down into the crack. This ends the first encounter, but this won’t be the last fight against Baldur.

As Kratos and Atreus is about to cross the bridge to Jötunnheim, Baldur ambushes them. Their fist fight lead to the destruction of the bridge. Atreus wanted to fight Baldur so badly that in his persistence, he shoots Kratos to incapacitate him and charges towards Baldur. Baldur easily knocks out Atreus and escapes with him on a dragon.

Kratos chases after them and manages to land on top of the dragon. The fight begins and the two exchange blows with one another. During the part where Baldur gains the upper hand, you’ll then be prompted to block and dodge his attacks and perform a counter attack.

After a few more punches and hanging on the side of the dragon, Kratos manages to make Baldur lose his grip and fall off the dragon. But Baldur manages to get back on the dragon, catching Kratos off guard and sends him flying with a punch. Kratos hangs on by burying his blades on the dragon’s wing and decides to stab the wing once more to bring the dragon down.

The dragon then crashes into the realm travel room. As Kratos arrives inside, he finds out that Baldur has already set the destination to Asgard with the intention of bringing down the full weight of Asgard on Kratos. After some struggle, Kratos manages to alter the destination to Helheim, whisking him, Atreus, and Baldur into the realm of the dead. This ends the second encounter with Baldur.

The final encounter starts when Kratos and Atreus were looking for Mimir’s second eye inside Jörmungandr’s stomach. Baldur fights Jörmungandr, making the world snake expel the two. Baldur then finally meets his mother Freya for the first time in years. With his hatred, Baldur tries to harm Freya, however Kratos interferes, which then leads up to their final fight.

Kratos and Baldur then fight each other. Baldur is more agile than before, evading more of the hits. He can also regenerate his life in the middle of the fight. Atreus helps out by shooting arrows towards Baldur. While all of this is happening, Freya tries to stop the two from fighting by summoning roots to entangle them.

Freya manages to entangle Kratos, but Baldur evades the roots meant for him, giving him the opening to attack Kratos. Atreus steps in between Baldur and his father, though this does not stop Baldur as he sends a punch to Atreus’ chest. After seeing blood, Kratos fears that his son has been fatally wounded, however Atreus states that wasn’t his blood but rather Baldur’s.

It turns out that a mistletoe arrow that was used to hastily repair Atreus’ quiver pierces Baldur’s hand, breaking Freya’s invulnerability spell on him. Fearing for her son’s life, Freya reanimates the giant Thamur’s corpse to intervene. The fight between Kratos and Baldur continues until Freya uses Thamur’s hand to protect Baldur.

Kratos lifts the hand, revealing a crystal on the giant’s ring. He calls for Atreus’ to shoot it, triggering a QTE, exploding the crystal just as Baldur is about to attack. The fight goes on as Freya summons adds to help out Baldur. To defeat The Stranger, using the Blades of Chaos will help mow down the adds and keep them at bay while still doing some damage towards Baldur.

Freya makes Thamur take out the giant stake lodged in its head and slams it to the ground. Kratos and Atreus climb it to chase after Baldur. As the fight continues, a couple more QTEs for Atreus happens as he shoots his arrows at Baldur. Kratos uses his Spartan Rage one more time and lands some more hits at Baldur with the help of Atreus. Freya intervenes once more by making the giant blow its icy breath.

Atreus stops the giant by calling Jörmungandr to their aid. As they get down, Kratos proceeds to finish off Baldur, but gets stopped by Freya. Baldur then proceeds to talk to his mother as she pleads him to forgive her, however Baldur rejects her please and strangles her. Kratos intervenes, finally ending Baldur’s life by snapping his neck.

The fights between Kratos and Baldur is just one of the things that make the game a great a memorable one. In the end, we can’t help but just to feel for Baldur after knowing what he had to go through and his predicament. The game did a very good job at telling the story not just through the dialogues, but also through the fights, not to mention that despite the changes, it’s still as close to the myths.

If you liked this guide, check out our other God of War articles:

Check out this Easter egg that Lance McDonald (@manfightdragon) discovered when Kratos first dumped Baldur’s body in the crack: