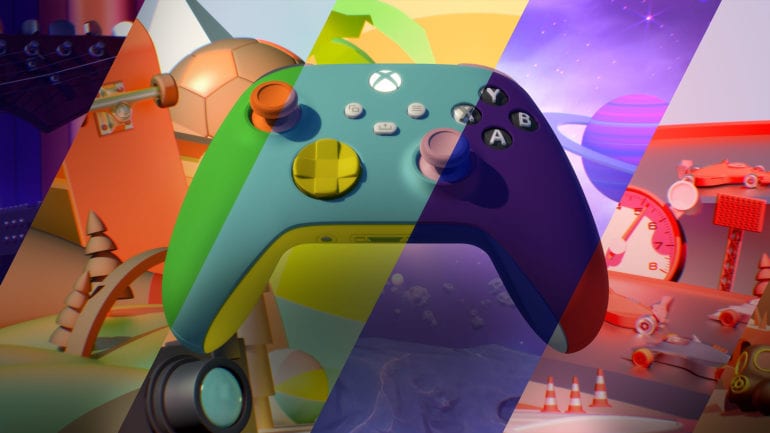 With the launch of the Xbox Series X|S last year, Microsoft has taken a more streamlined and user input approach to their design of the newest console, one such feature I will be looking at is Xbox Design Lab, a controller design program offered by Microsoft recently relaunched after this year’s Microsoft’s Xbox/Bethesda games showcase.

Inside the program offers a wide selection of colors and tints to work with, offering to cover the front and backplate, the trigger, and even the face buttons.  Even before creating your own, there are a few premade to get the creative juices going. For now, I’ll give you some of my favorites that were already provided:

This design has a nice motive, with bright greens on the joysticks and bumpers, much like aliens of old, with a darker design of more modern interpretations of said extra-terrestrials.

Using a calmer color palette, this seems to seamlessly blend but has a noted point of the bright red bumpers, which give an unexpected, nice bow on top.

Dark colours, and a lot of them, this seems to be the perfect controller to lose once the lights go out, and as a fan of cooler colours on the eyes. This is a favourite.

Focusing on bright yellow with a black underside, this shard contrast works well, as a sign of dominance to any potential opponents. It also just looks like it would be very hard to lose.

This color design takes the bright aesthetics of the hit platformer and places it in your hands, giving a neon-style comic book aesthetic. As a fan of the original, I wouldn’t mind on my shelf in time for the sequel.

This styling is purely aesthetic, as a fan of black and white and noir movies, this is simple, yet elegant. Sometimes a lack of color adds the most color of all next to the rainbows of other controllers.

This style gives those of the fans of the first-person shooter genre an awesome designed controller to fit with the styling of military vehicles and weapons. Just be sure not to put it down, you might not find it again.

This frog-like design is an acquired taste, but I like it for how bold it is, marking it as truly the owners in a pile. With the famous Battletoads getting love these days, this is a nice companion.

This red hot design looks like it was plucked from a volcano itself, and with its bright red face and orange underside, you’ll feel your hands sweat a BIT more during those crucial moments.

Lastly, this one is a nice shade of the deep ocean…or a certain hedgehog. I like this design much like the stealth for its toned-down, calmer design, and with its added tones to compliment the main faceplate, it’s a nice relaxing controller to behold.

With all the options Xbox Design Labs offer, it still has a lot to add but it has a great foundation. Maybe allowing us to upload custom images or pictures to fully customize our Xbox controllers?

Share to us your fabulous Xbox controller designs in the comments below!