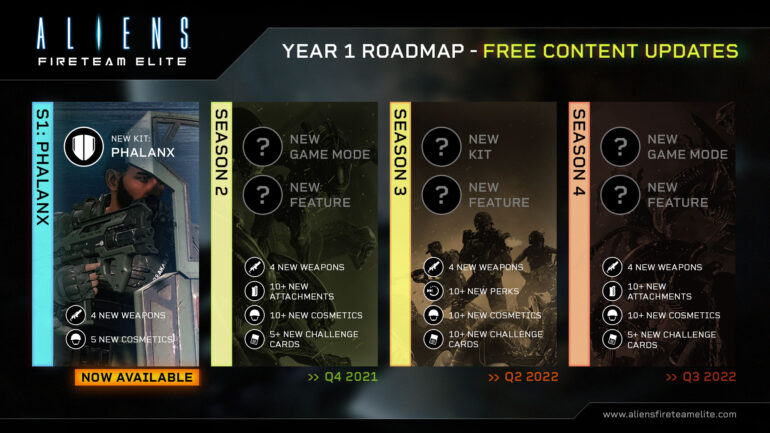 Cold Iron Studios has recently revealed the Aliens Fireteam Elite Roadmap for Year 1 and the first season is already available for download.

The studio recently shared what their future plans are for the online multiplayer shooter based on the Aliens franchise. The first season is now available and it introduces the new kit called Phalanx. Aside from that, this season has introduced four new weapons and five new cosmetics as well.

For upcoming Season 2 though, this will be launched in the fourth quarter of 2021. It will introduce a new game mode and a new feature to enjoy. Another four new weapons, more than 10 new attachments, more than 10 new cosmetics, and over five new challenge cards will be added to the game as well.

Season 3 is next and it will be released in the second quarter of 2022. A new kit and a new feature will be added in this season along with four new weapons, more than 10 new perks, more than 10 new cosmetics, and over 10 new challenge cards.

Last is Season 4, which will add a new game mode and a new feature. Aside from those two, it will also introduce four new weapons, over 10 new attachments, over 10 new cosmetics, and over five new challenge cards.

According to the studio, their current focus is to bring quality of life improvements to the game that will add more enjoyment to the game’s existing content. There is also a future Endeavor Pass DLC that will launch together with the upcoming new Season. These DLC packs will have various outfits, head accessories, weapon decals, weapon colors, emotes, and so much more. They can be purchased individually for only $9.99 each or just upgrade to the Deluxe Edition to get all DLC packs together with the Endeavor Veteran Pack.

Check out our complete guide for all of the information you need for the game.