All 15 Lost Ark Classes – Best Class for PVE and PVP

An overview on all the available classes in Lost Ark. 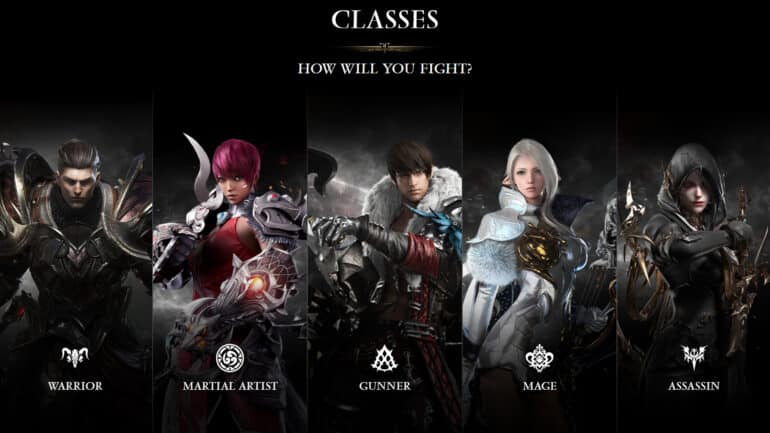 As an MMORPG, Lost Ark allows players to play among 15 different classes from the get go, ranging from the melee Berserker class, the ranged Gunslinger class, and the magic-wielding Sorceress class, just to name a few. In this guide, we will look into these classes to help you choose which would would best suit your play style.

Lost Ark is the newest MMORPG that is turning out to be a massive hit in the western side of the world. This game was developed by Smilegate who made other popular games such as CrossFire and Epic Seven.

The Warrior class are your meaty heavy hitters among the other classes. They don’t have the best mobility, but they make it up with their attacks that deal massive damage to whoever gets in their way. This class is further subdivided into three advanced classes: Berserker, Paladin, and Gunlancer.

Bersekers are your greatsword-wielding warriors that are known to dish out relentless attacks. They have a burst mode that gives them increased attack and movement speed that helps them make quick work out of their enemies.

Paladins are known to be the warriors who use the the holy powers to deal offensive attacks as well as provide support to their team, making them a must-have in a party.

Gunlancers are considered to be the tankiest tanks amongst the classes. They don’t only provide artillery fire with their gunlances, but they also protect allies from enemy attacks with their shields.

Martial Artists use their agility and lightning-fast reflexes to overwhelm the enemy with their combos. They are further subdivided into four advanced classes: Striker, Wardancer, Scrapper, and Soulfist.

Strikers are martial arts masters that combine their hard-hitting physical strikes with their swiftness akin to the wind. Strikers are a class similar to the Wardancers, but are exclusively males.

Wardancers are nimble martial arts masters who can subdue opponents with their flurry of attacks, plus they can unleash devastating attacks by storing up elemental energy. Wardancers are a class similar to Strikers, but are exclusively females.

Scrappers are martial artists who wield huge gauntlets into fights. Each of the gauntlets generate their own energy that the other half of the pair feeds off of, opening the possibility of chaining combos.

Soulfists use a special form of energy called Adamance which they imbue on both their melee and ranged attacks for some added punch.

Gunners are your ranged weapon specialists who like to take care of enemies from a distance. They are further subdivided into four advanced classes: Gunslinger, Deadeye, Artillerist, and Sharpshooter.

Gunslingers are quick and agile gunners who carry with them different guns for different situations. They are similar to the Deadeye class, but the class is only exclusive to females.

Deadeyes have an arsenal the comprises a double handgun, a shotgun, and a rifle and can easily switch among them as needed. This class is similar to the Gunslingers, but it is exclusive for males.

Artillerists bring the big guns, literally. With their massive firepower, they could blast enemies into smithereens without any problems.

Sharpshooters are masters of the mechanical bow and can juggle between both single-target and AoE attacks to clear out the battlefield.

Mages are the conjurers of ancient magic and cast a plethora of spells, ranging from ones that provide support to the party, and ones that bring destruction to those that oppose them. This class is further subdivided into two advanced classes: Bard and Sorceress.

Bards specialize in serenades that provide buffs that powers up the team, as well as healing spells to help sustain them. Though more versed with the supportive spells, they still have offensive ones that can deal some damage.

Sorceress are wielders of elemental magic that can deal damage in an area, making them the go-to for crowd control.

Assassins use the power of chaos to fight on the side of order. They’re well known at executing fast and powerful attacks that leave the enemy with no time to react. This class is further subdivided into two advanced classes: Shadowhunter and Deathblade.

Shadowhunters tap into their demonic powers to fight against the demons themselves, gaining immense power and breakneck speed.

Deathblades make use of their three swords to inflict damage to their enemies through multiple quick slashes. Their skills are also imbued with chaos energy, making every hit fatal.

For the uninitiated, both assassin classes may look similar since they’re both masters of being agile and specialize at killing in a blink, with just a few differences between their skills. The main difference between the Shadowhunter and the Deathblade lies on the rate of damage that they do in a given time.

Deathblades deal damage through a thousand cuts and find it easy to chain their skills into combos. With this, their attack output is more or less consistent throughout a fight.

Shadowhunters on the other hand deal relatively weaker damage while on their normal state, but their damage output spikes once they unleash their inner demon. So in a fight, Shadowhunter’s damage output comes in bursts.

Another difference between the two classes is their range of attack, with Shadowhunters having a couple of skills that have longer range, while Deathblades have skills that are within or just a bit away from melee range.

We’ve compiled a list of the finest classes in Lost Ark for both PvE and PvP.

The best Lost Ark PvE classes are as follows:

The best Lost Ark PvP classes are as follows:

Some classes will require a lot of gold to start. A character becomes stronger when you can afford all your jewels, skill books, awakenings, gear upgrades, and more. So a class may take a while to get going.

Every class has a party buff who aids the team. Some classes increase flat damage while others reduce defensive stats or increase critical chance damage.

Optimally played classes have astounding numbers when it comes to damage dealt. To maximize team fights and group composition, you must first understand how it works.

Lastly, we are also looking into the class’s difficulty. There are many classes that are more difficult to play than other classes. Some builds are more squishy but deal additional damage, some classes have skill mechanics that require timing, experience and more practice to master. You should choose a class that suits your playstyle best.

In large part, Bards are sought after in groups because of their table-turning heals and buffs, which make them a popular choice regardless of difficulty. A safe bet if you’re more comfortable playing a supporting role in battles than than taking the most damage.

Players who don’t want the support or tanky elements of the Bard or Gunlancer may prefer the Berserker, a great DPS class for individuals who enjoy getting close to the action and causing havoc. If you don’t want to spend a lot of time thinking about your Lost Ark class, this is the one for you.

As a counterbalance to the Bard, the Gunlancer serves as a stomping ground for all other tanks. Because of its high maximum HP and wide AOE shield, Gunlancers are a great way to keep the rest of your party safe while you take care of protecting fragile teammates with your durability and can manage to deal high damage to the enemies at the same time.

Because of its howl, this class has a special interrupt ability. When he cries, enemy skills will be canceled. Furthermore, the Gunlancer has a large shield, making it more likely to stand when facing a boss and gain aggro.

The Bard is an excellent choice for competitive fighting if you prefer team game settings where they can provide support to DPS players. Interestingly, it does so for the same reason it does in PVE – outstanding utility in the form of heals and buffs make it essential in any PVP setup.

The Bard’s identity skill, Courage, can boost damage and crit. This class also tends to use engravings, such as Awakening and Specialist Engravings, which are cheaper because only supports use them. Because support classes are less popular, these engravings are in less demand. They’re still pricey, but not as much as the core DPS engravings.

The Deathblade class is a fantastic choice for PVP because of its high mobility and damage output, making it a formidable adversary. The Deathblade is a great class if you enjoy slashing through an enemy’s life bar quickly.

Check out this video by RageGamingVideos going over each of the available classes in Lost Ark: