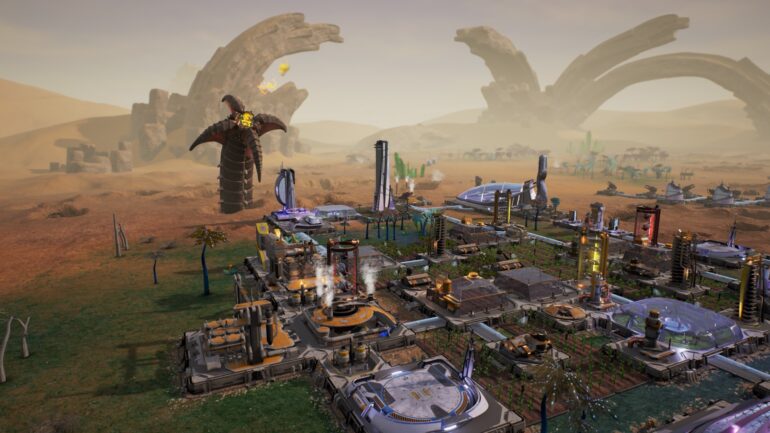 Aven Colony is a simulator of building your very own city in space. For the most part, it is quite simple with a few complex mechanisms to take note of. This guide will help you understand the game better so you can have more fun playing the game.

The mechanics of this game aren’t all too different from other city simulators such as Sim City, but it also has sprinkles of Real Time Strategy to keep things interesting. 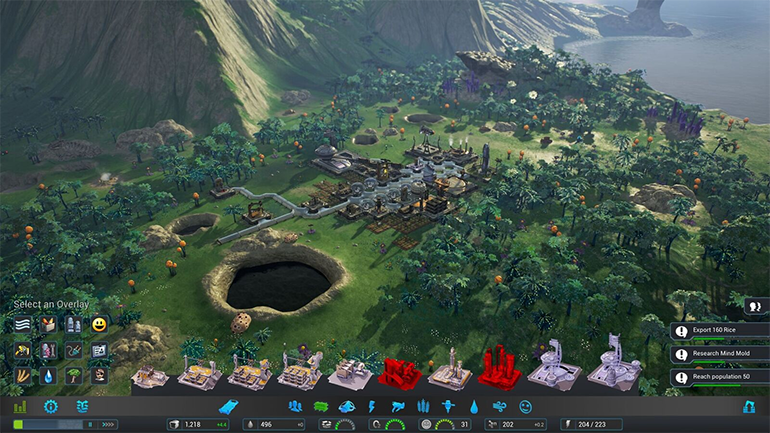 Since you’re just starting out the game, there are two tutorial missions that can help you get a layout of the game. However, they don’t necessarily cover everything and you have to experiment for yourself before you can really get a proper hold of the game.

After the two tutorial missions, we recommend that you either try out some campaign missions first. Either that, or experiment for yourself in “Sandbox Mode” on High starting resources and Max minerals setting as normal settings and anything below are quickly depleted. You can also try to disable “referendum” which is essentially the colonists voting for who they want as their new governor. This will help make it easier for you to experiment and play around with the world.

Nanites are probably the most important element in Aven Colony. They are essentially your funds in order for you to build up your economy with various buildings. The quickest way to gain them is by mining for minerals which are either Iron, Copper, or Keiko Sludge and then converting them to Nanites with a Nanite Processor building.

Buildings can be quite costly. And the amount of Nanites that you receive may not be able to keep up with your economy. Sometimes, it can be advisable to upgrade certain buildings instead of building new ones in order to compensate.

In order to keep your colony functioning, it needs to have power. Without sufficient power, your colony is forced to power down a few buildings in order to keep going. Avoiding this is top priority, as some buildings are crucial and can place you at a stalemate if your Construction Drone Hub is not functioning due lack of power because it is what builds newer buildings. In order to avoid this, you can build Wind Turbines or Solar Panels to help you add more to it. But initially at the start of the game, you should immediately go for a Geothermal Generator as it produces the most power and is generally inexpensive. This can give you a massive boost at the start of the game. Geothermal Generators can only be built on Geothermal Vents which appears to be a bubbling green pool that is reminiscent to that of lava.

Note: Be careful of Geothermal Vents as if you’re colony is very near one and it erupts, your colony can suffer serious damage. You will be given a warning before this happens. This is why you should build Geothermal Generators on vents near any buildings you make.

These two aren’t generally hard to come by. But they depend entirely on what map you’re in. Meaning that some maps are more likely to produce edible food than others. We’ll talk about what to do with inedible crops later.

You’ll see a number of corresponding to how what type of food will do good on what ground, and the higher the number the better.

Water is generally easy to gain, and not many water pumps are needed to run a colony. Though this can depend on what map you are. Harder maps on the bottom of the list have fewer resources for you to take from.

Note: Beware of Winter time! Near the end of the year, or Sol as Aven Colony pronounces it, will reduce both your food and electricity intake by half. Greenhouses can be cut to half right down to 50% but farms will stop production during this time.

This is important because it decides how fast your resources pool to you. The more people working at a certain building (you have a limited amount to keep count) the more effective it is. And the more happy they are, the more energized they’ll be at work. The efficiency depends on these two elements as well as their health.

Building an Immigration Center will help you pool your population for more workers. But beware of overpopulation. Overpopulation usually means that there are too many people and not enough jobs. You should also take care to have the appropriate number of residences in order to keep them housed, otherwise they won’t stay.

You can manage your population (and your building efficiency to an extent) by going to Colony Control and using Powers and Policies to put an Immigration ban and Emigration Allowed to reduce population. This is important for building management.

As we’ve mentioned, how happy you colonists are can be a factor to how well they work. But happiness plays a key role into helping you win the referendum to keep you as governor.

There are buildings out there that are designed to help you raise the happiness meter of your colonists. You should use them while also keeping an eye on your Nanites as they can be costly.

Health is also a major factor in your happiness. If one of your colonists is sick, then they won’t be happy. These people will start to work less effective and can even die.

One of the things that tutorial doesn’t teach you, is defending your colony from harmful alien life. Don’t overthink it. This isn’t quite a Command and Conquer game where you’ll be building your own army to combat this.

Harmful alien life can invade your colony with diseases and cause harm to your citizens. The only way to combat this is through making plasma turrets. However, keep in mind that turret accuracy is not 100% and more often miss than not. The more turrets there are in a certain are, the higher the chances of combat. 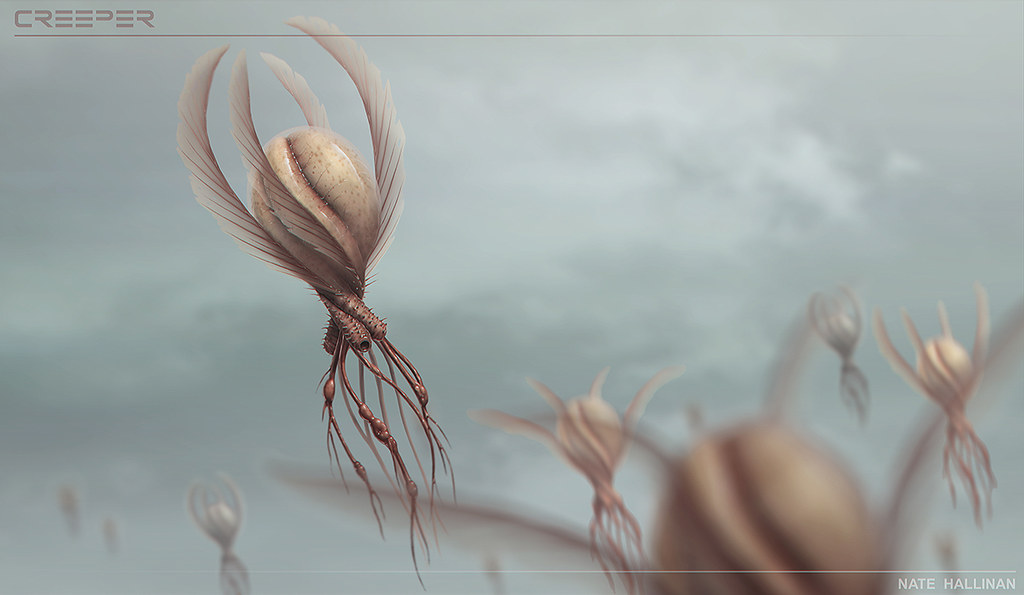 The key sectors to defend are your air Air Intake Fans or your Air Filters as they are susceptible to spores that cause fatal diseases that harm your citizens. There are also aliens that are tentacle like (and they’re not interested interspecies relationships) that invade buildings.

If you’re too late and harmful alien spores have infected your colony, you can combat this by either having Scrubber Drone Hubs (you can build this building specifically) to scrub away alien filth or Hospitals to slow or halt diseases.

Note: Alien frequency can depend on your initial settings. Campaign mode, however, depends on the level entirely. But in Sandbox, you can set it for yourself.

Plasma turrets can also combat shards, which are damaging to your buildings all around. Shards occasionally happen throughout the winter, and isn’t the only danger around that season. There is the occasional lightning strike you should beware of, as they damage buildings or ruin Tunnels that you’ve built. One way to combat this is by building a Lightning Tower to defend a certain area of your colony. You have to first built an Energy Battery before you build a Lightning Tower though. This will also help increase you power even higher.

Another thing you have to keep you colonists safe from, is from themselves.

Crime can be a real problem. The bigger your colony is, the more frequent crime will be. The more unhappy your colonist are, the more frequent crime will be. At times, the best way to combat this is by keeping them happy, but that won’t stop crime completely. You can build multiple Police Drone Hubs in order to combat crime. But keep in mind that they only affect a certain area.

There are many food types for you to use, and citizens may complain about the lack of variety. Who wouldn’t if all they have to eat is broccoli every single day.

This can be really tricky to provide a different variety of food,  especially since some maps are catering to specific foods only. There are multiple ways to combat this, however.

One way is by building a Trade Hub to exchange your current food for another one. You can see what to exchange on your Trade Menu and select this for yourself. Each Trade Hub can only exchange one type of material (can also be food) in exchange for another. Build more for more imports of different variety.

A Research Center also allows for you to discover ways to be able to use inedible crops and turn them into products for consummation. Mills and Chemical Plants can help you convert this inedible crops to edible food for the colony. This will massively help with the variety problem and keep them happy.

The best way so far to manage every area is by going through the Overlay Menu to keep an eye on which are needs what. This will help give you a great view of what needs to be done to a certain area before it becomes a problem for the colony in general.

This is fancy word for how far you have to travel for work.

People don’t like having to travel really far from home to head to their jobs, and this game shows it. Building residences nearby certain workplaces and making sure you tunnels connect to the buildings without merging them together as one is a great way to combat commute problems. This is also a key factor towards colony happiness.

There are many ways for you to enjoy the game.

This is merely a great guide for you to start out with without spoiling the entire game for you to discover. With the knowledge that this guide gives you, you should be off to a great start to run your own colony.

What do you think? Did we miss anything? Feel free to tell us down below in the comment section!

Have fun with Aven Colony!

Editor’s Note: You can also read our review of Aven Colony by the same author of this article!