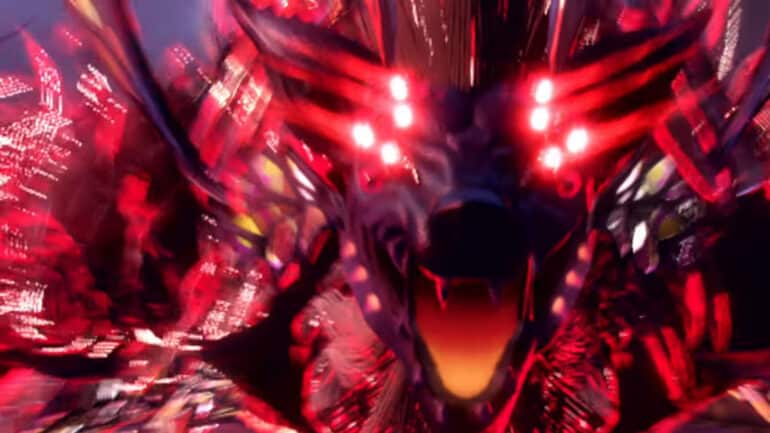 Cover of Night is the tenth chapter in Bayonetta 3 following the journey of Viola as she tries to catch up with Luka and help him from going berserk.

In this guide, we will go through Chapter 10: Cover of Night, listing along any collectibles as well as Bewitchments that can be acquired in the chapter.

Viola makes her way back to Thule and finds more worlds being destroyed. She then hears Luka’s howl and decides to follow it.

Along the way, you’ll find colorful crystals on the ground. Step on them to get the Step on 10 of the fallen stained glass shards on Thule Bewitchment.

From the starting point, head towards the right and you’ll find a platform. Step on it to reveal more platforms. Continue jumping to the next platforms until you get the figure box.

Continue up from the platform to get to the verse portal. In this challenge, you can only deal damage during Witch Time, so make sure to use Viola’s block to get in it, then use Cheshire to deal lots of damage. Once cleared, you’ll be rewarded with a Broken Moon Pearl.

Head back down to the first platform after clearing the verse and follow the platform to the right to get the key.

Head back to the starting point and follow the path to the left. Climb up the cliffs to find the crow perched by the edge.

Just a bit ahead from where the crow is perched is the Echoes of Memory: Key to Success.

Continue a bit more and you’ll find another card pack by the ledge.

Head to the area in the middle of the towers to trigger the fight. Clear the enemies to proceed.

Make your way to the detached small tower to the right and activate the chest to start a time trial. Get all five pieces to be rewarded with a Broken Moon Pearl.

Make your way to the other small tower via the platform and insert the key. Inside is a chest that contains a Broken Witch Heart.

While on the tower, make your way to the rooftop of any tower to get the Climb to the top of the stone tower on Thule Bewitchment.

Make your way to the tower on the other side near the starting point to find the Echoes of Memory: The Sealed Golem. You can break the wall at the base of the tower and ride the platform inside, or you can cross the bridges on the upper levels.

At the base of the tower, inspect the ancient mechanoid to find the Medallion Shard.

On the path approaching the orb, go to the building on the left and break its wall to find a figure box inside.

Follow the path up to the gate, then break the gate. Head inside and open the chest to reveal an umbran circle. The fight will then start. Use Cheshire to quickly clear the enemy.

Head towards the stairs and on the rift portal to reach the next destination.

While traversing through the rift, keep yourself from falling to get the Travel through Ginnungagap without falling Bewitchment.

Continue following the orb to reach the next fight. Clear the enemies to proceed.

After the fight, don’t follow the orb yet. Take the path to the left and quickly cross it to reach the card pack.

As you exit the portal, you’ll meet Lukaon, Luka’s alternate version. After the dialogue, you’ll find yourself transported to Paris.

Go to the right side of the street to find the portal for the next fight. Clear the enemies to proceed.

Near the passageway, activate the cube to reveal a platform. Take the platform and cross the other platforms to reach another cube that wills tart a time trial. Get all the pieces to be rewarded with a Broken Witch Heart.

Just behind the cube for the platform is a blue storefront. Destroy it to reveal the figure box.

Over on the left side, near the ramp and beside the blue car, destroy the red awning of the store to find the card pack.

Take the alley by the left side of the street to find the portal to the next verse. In this challenge, you won’t be able to use Witch Time. Clear the challenge to be rewarded with a full Witch Heart.

Continue through the path behind the verse and turn left, and another left. You’ll find a broken garage door behind the tree. Break it to find the toad inside.

Just across the toad is another cube that will transform into a golem. It will also spawn another two golems by its side. Defeat all golems to get the Defeat 3 small Golems Bewitchment.

Head back to the main street and you’ll find the portal to Rodin’s Take the time to replenish your items or purchase accessories.

On the left side of the street, just past Rodin’s portal, check the passage towards the subway to find the Echoes of Memory: The Wandering Soul.

Head towards the Arc to start the fight against Luka. He has four health bars During this fight, it’s best to concentrate more on entering Witch Time by blocking his attacks, and then counter attacking only under Witch Time.

During the fight, Luka will summon a special field where he can warp in and out of portals. It’s best to evade or block only during the field until you get the Avoid getting hit by Strider inside his special field Bewitchment.

Check out this video by Timodus showing gameplay for Chapter 10: