An Umbra Witch's best friends. A list of all weapons in Bayonetta 3. 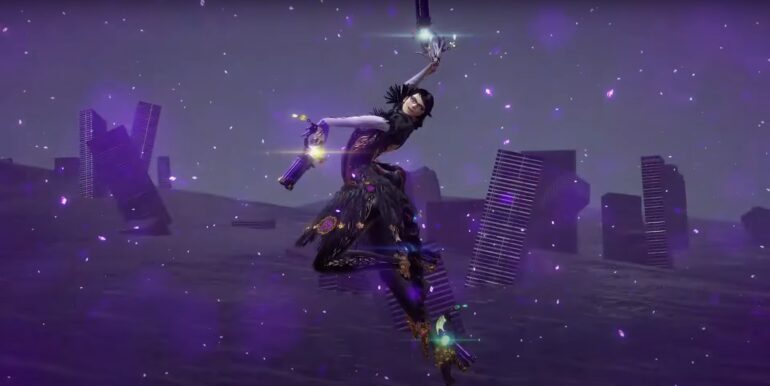 Even with her powers as an Umbra witch, Bayonetta still needs some firepower in her arsenal. In Bayonetta 3 weapons of all sorts can be acquired that go far beyond the conventional means of fighting, but considering this franchise that should go without saying. If you’re curious about the new toys you get to play with in this game, we’ve created a list for the weapons in Bayonetta 3 including how to unlock them.

Colour My World is a set of four powerful handguns and the first of Bayonetta 3 weapons, the titular character’s new best friends. Replacing Love Is Blue and Scarborough Fair from the previous game, Colour My World functions a little differently from their predecessors. Other than just having a purple color palette, the quadruple handguns are no longer used in tandem with other weapons in separate slots instead being treated as their own complete set. However, they also do ricochet around like Scarborough Fair did.

When equipped, Colour My World has Bayonetta performing like a dancer in combat. This is because the Infernal Demon, Madame Butterfly, is bound to the weapon set.

G-Pillar is one of the Bayonetta 3 weapons that is absolutely massive in size. It doubles as a dual club and a high-caliber rifle. Each swing can multiple enemies at the same time and its focused fire can hit enemies long range.

This weapon is said to be made out of Gamorrah’s biological demon’s tissue. And with it equipped, Bayonetta can perform medium ranged swipes that are coated with purple energy.

Ignis Araneae Yo-Yo is one of the Bayonetta 3 weapons that deals medium-to-long ranged attacks. Each impact of the spinning yo-yos deals multiple hits at once. They can even be tethered to whips to extend their attack range for long distance targets. When fired, this weapon shoots out webs against enemies.

When equipping the Ignis Araneae Yo-Yo, Bayonetta roller skates around the combat zone similar to what Odette and Salamandra could do in the previous games. The blades on her shoes are being used around like a pair of roller skates.

Simoon is one of the Bayonetta 3 weapons that hit incredibly fast. This weapons set has a fan like appearance which appropriately allow it to use the wind to its favor. Simoon will fire blades of wind at range and deliver quick bursts of slices up close.

Compared to other weapons, Simoon doesn’t have as much range in melee. The weapon set is better used for short-to-mid ranged attacks which are incredibly fast. When channeling the inner demon, Malphas, Bayonetta can transform into a being that flies around and summons powerful demonic wind to tear foes apart.

Dead End Express is one of the Bayonetta 3 weapons that has an incredibly large radius for damage. Each swing of this train chainsaw-esque weapon has enemies all around you being sliced to pieces. Bayonetta can even ride this weapon to charge at opponents on her own behest.

With Dead End Express equipped, Bayonetta can really lay some carnage everywhere around her. It leaves colored flames for each swing and has a large radius of attacking making it good for punishing mobs. The only real downside is that Dead End Express doesn’t really have any ranged options.

Ribbit Libido-BZ55 is one of the Bayonetta 3 weapons that is basically a microphone stand that has wide swings as if it were a spear. An appropriate weapon that mirrors Bayonetta’s diva-esque personality, Ribbit Libido-BZ55 can channel music to hit enemies from a distance once Bayonetta fuses with Baal.

When used as a weapon in its own right, the Ribbit Libido-BZ55 is used more like a spear or a polearm. Bayonetta can swing it vertically or horizontally for better angles and she can thrust it into enemies in front of her. If they’re too far our of her reach, she can use the microphone to fire a ball of vocal projectiles at enemies.

Cruel Altea is one of the Bayonetta 3 weapons that have multiple range of attacks. With it equipped, Bayonetta can throw her punches at range and even burn enemies down with blue flames from this weapon set. With Cruel Altea, Bayonetta is basically like a kickboxer who dominate her enemies with a flurry of remote punches and kicks.

Abracadabra is one of the Bayonetta 3 weapons that uses magic tricks to fight opponents. Taking on the appearance of a wand named Cadabra and a hat named Abra, Bayonetta can use this weapon set to summon anything from birds to explosives to combat enemies. When fighting enemies at a distance, Bayonetta can call forth an army of electric bats to her target.

When used as a weapon, Abracadabra can be better at range. Most of its attacks require some distance so it isn’t ideal when fighting opponents up close.

Tartarus is one of the Bayonetta 3 weapons that has quite a few features in its arsenal. It can spew out offensive machinery such as Gatling guns underneath and can be used like spiked gauntlets against enemies. Tartarus uses the spirits of the fallen Umbra to give its users powers to combat their foes.

The typical handgun without any special qualities in the Bayonetta 3 weapons arsenal list. It’s designed to be used by normal humans so it isn’t as effective in fighting forces beyond human comprehension. It seems to be designed after the standard Colt 1911 pistol.

There isn’t anything special about these weapons. They’re an inferior version of Colour My World. So players most likely won’t be using them after trading up.

Mab Dachi is one of the Bayonetta 3 weapons that is a No Dachi sword being infested by a mischievous cat demon. This weapon is wielded by Viola who is one of the playable characters in the game instead of Bayonetta herself. The Mab Dachi is said to be able to cut through anything when wielded by a skilled swordsman.

This weapon can only be wielded by Viola throughout the events of Bayonetta 3. It is her only way to access her version of Witch Time which requires her to parry and last minute dodge enemy attacks. Viola can throw it at enemies and it comes back as if it were a boomerang.

Bull Kiss is one of the Bayonetta 3 weapons that are not wielded by the titular character. Instead the Bull Kiss is unique to Viola who uses them as her ranged attacks when dealing with enemies from afar. While they may look like ordinary darts, they’re actually infused with ether which turns them into highly damaging magic missiles.

All 4 One is one of the Bayonetta 3 weapons that is not used by Bayonetta herself. Instead this weapon set is unique to Jeanne who is one of the playable characters in the game. All 4 One doesn’t just function as powerful handguns but they’re also devastating melee weapons that Jeanne can use to put down any who get in her way.

That’s all of the Bayonetta 3 weapons listed. We hope this article was informative. For more Bayonetta 3 content, you’re already in the right place.

If you’re still curious about the Bayonetta 3 weapons, then this Youtube video from MELOO should show you how they each work.