Bayonetta 3 Walkthrough Chapter 6: Off the Rails 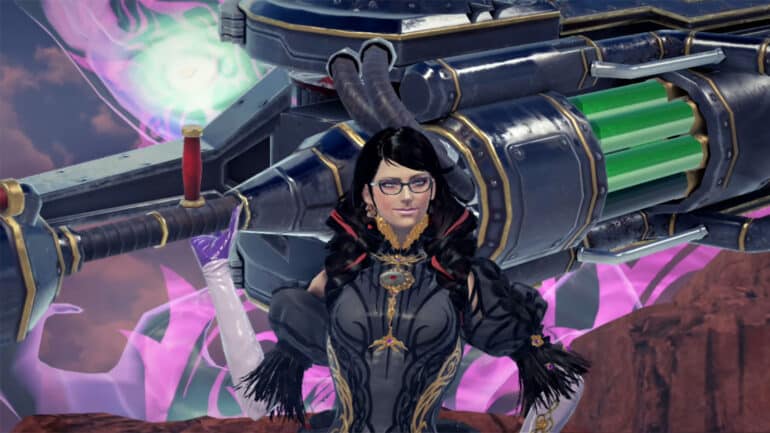 Off the Rails is the sixth chapter in Bayonetta 3 where Bayonetta continues her journey in the ruined alternate Qin Lan. Still on the trail of the homunculi, she goes through the land in order to recover one of the Chaos Gears. She will once again meet up with one of her alternates along the way.

In this guide, we will go through Chapter 6: Off the Rails, listing along any collectibles as well as Bewitchments that can be acquired in the chapter.

Chapter 6 – Off the Rails Objectives and Collectibles

From the starting point, turn around and attack the huge door with your summon to break it. Inside, you’ll fight another Virga. Defeat it to clear the verse.

On the right side, climb to the very top of the hut to find the card pack.

Just inside the hut you’re on is the cat. It will run around the ledges and over the wheels, so try to anticipate the path it’s taking.

Take some time to stand up one of the wheels, just for at least 5 seconds to get the Stay on the lava wheel for 5 seconds Bewitchment.

On the far right sector, go to the glowing marker to get into the next encounter. Clear out the enemies to proceed.

Climb the tower near the center courtyard and go around its upper floor to find a figure box.

From the tower, head back down and go towards the far corner of the courtyard near the starting point to find a figure box.

Go towards the guards blocking the gate to start the next verse. In this fight, you’ll be fighting against trees and the jellyfish enemies. Remember to not use your summons against the jellyfishes to prevent them from splitting.

Before going through the gate to the next area, climb on top of the gate to find a treasure chest containing a Broken Moon Pearl.

Go through the gate to arrive at the next area. Prepare to search for a lot of collectibles at this point.

Go to the structure on the left before reaching the tower to find a card pack.

After felling the broken tower, go around its base first to find a figure box.

Before crossing the bridge, use Phantasmaraneae to go across the ruins to the left side, either by walking on lava or by swinging with the masquerade. You’ll find a Congestus which you can use after tipping. Same as before, rewind time only partially until you get a decent debris bridge towards the exposed room on the left. Inside the room is the Broken Witch Heart.

Go to the Congestus again and rewind time to the max to reveal a figure box just near the base of the rock wall.

On the opposite end of the wall where the Congestus is at is a cube that reveals a platform. Go up to the second platform which will move on its own. Before it reaches its destination, try to jump towards the other cube on the lava river and attack it to reveal a time trial. Use Phantasmaraneae Masquerade to walk across the lava and swing towards the pieces. After getting all five pieces, you will be rewarded with a Broken Witch Heart.

At the end of the tower bridge, head towards the left to find a figure box near the rock outcrop you’ve been to from the previous time trial. You can hit the nearby cube to reveal a platform and get a closer launch point, or you can simply swing towards the figure box.

Climb the ledge towards the next arena to initiate the fight. Nothing special with this fight; simply clear the enemies to proceed.

Continue straight ahead to find Rodin’s portal. Use this time to replenish items or get accessories.

Go towards the path on the right and climb the tower straight ahead to find the crow. Try to intercept it as it flies towards the left.

Go down just below the tower where the crow was to find the portal to Verse #5. The condition for this challenge is to defeat all enemies with just one continuous combo. Use your quick weapons instead to keep the combo going. Once cleared, you’ll receive a Broken Moon Pearl.

Just below Verse #5 are two chests, with one that is moving. Open the small chest first to reveal a moon point to replenish your summon energy, then use your summon to attack the other chest to get a Broken Moon Pearl.

Head back up the stairs to arrive at the arena for the next fight. Clear out the enemies to proceed.

Climb the nearby tower with a wheel behind it to find a figure box.

As you arrive at the gate at the end of the path, you’ll enter into the next fight. Clear out all the enemies to proceed.

Off to the right side of the arena, jump on top of the debris to get to the card pack.

The toad can be found by the broken gate near the arena.

Go to the lift on the left and head to the purple glowing marker to start the verse. In this challenge, you will be playing the floor is lava as you cannot land on the fog below. You can use the only pedestal on the arena to stand on, or you can time your jumps on top of the enemies. Once completed, you’ll earnt a full Witch Heart.

Go into the structure to start the next verse where you’ll have to fight two homunculi. There will be lava dripping down from above, so make sure to keep an eye out of the red circles on the ground to avoid getting hit.

After defeating the homunculi, Pyrocumulus will appear for the next phase. It has several attacks and five health bars. It’s best to stick with Phantasmaraneae since the platform will be surrounded by lava and Pyrocumulus will tip it from time to time.

Pyrocumulus has several attacks which include:

Once three of its health bars are down, the verse will be completed.

What basically is the next phase of the fight continues on with Verse #10 where another alt Bayonetta comes in with Wartrain Gouon and joins the fight. The fight then turns into a chase shooter where Bayonetta takes up the cannon to shoot at Pyrocumulus.

During the chase, keep your reticle aimed at Pyrocumulus or at the debris that it chucks at you. Pay attention as it can also smack its hand towards you which you can deflect by shooting enough times. Continue shooting at the targets until you proceed with the gigaton attack to complete the verse.

If you manage to not get hit by anything during the chase, you will get the Avoid getting hit by debris thrown Pyrocumulus Bewitchment.

After the next cutscene where alt Bayonetta gets consumed by Pyrocumulus to turn into Arch-Pyrocumulus, the fight continues on as Bayonetta summons Queen Butterfly.

In this fight, you shoot bubbles at Arch-Pyrocumulus while deflecting its attack from time to time. Once enough bubbles hit it, it will be encased in a bubble, giving you the chance to attack. It will spawn more of itself every after attack of yours, but only one will be the real enemy that can trigger the attack.

Try to deflect at least three of the incoming staff attacks to get the Deflect Arch-Pyrocumulus’ staff attack 3 times Bewitchment.

Once all of its health is gone, a cutscene plays and the chapter ends. You’ll then be able to use Wartrain Gouon and the Dead End Express weapon.

Check out this video by Devil Exe showing the gameplay for Chapter 6: