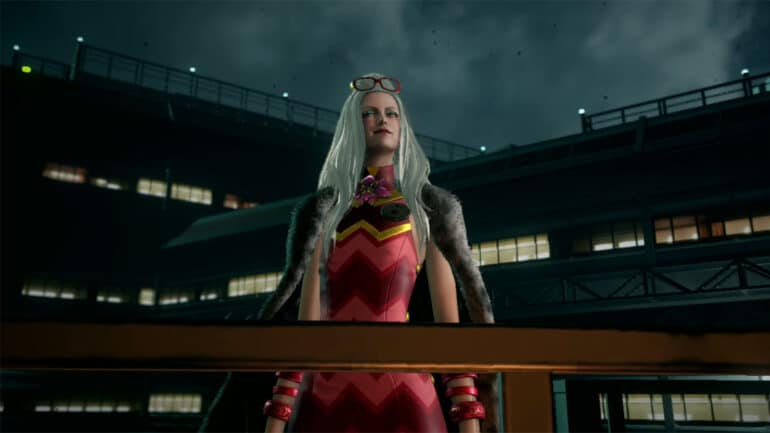 The Crimson Shadow is the first side mission in Bayonetta 3 that follows Jeanne as she infiltrates the homunculus-overrun facility to rescue Dr. Sigurd, the scientist who will be able to help them. The gameplay pace changes into a stealth side-scrolling mission where players have to sneak past enemies or eliminate them stealthily to get through the facility.

In this guide, we will go through Side Mission 1: The Crimson Shadow, listing along any collectibles as well as Bewitchments that can be acquired in the chapter.

You’ll play as Jeanne as you go through the facility, using her unique skills to sneak through or eliminate enemies. Though you have access to your weapons, unless you’re using the shotgun, it’s easier to to clear out the enemies using stealth kills.

Enemies will have a vision cone showing you the extent of their vision. You can do stealth kills when you’re behind them, or you’re hiding behind a door or a vent. There are also turret enemies that latch on to the ceiling; they can be easily passed through and there’s no point to kill them.

Going through the vents or diving underwater will automatically transform Jeanne to her Lynx or Centipede mode, respectively.

Side Mission 1 The Crimson Shadow Bewitchments

There are a couple collectibles that can be found in the facility.

Underwater, head to the left side of the pool where the Echoes of Memory is slightly above water.

Underwater, head to the left most corner of the pool while avoiding the whirlpools. You’ll find a hidden pipe that goes around and leads to the Echoes of Memory #2.

After getting access to the underwater section, climb back up through the elevator, exit by the laser level, then enter the vents to avoid the lasers.

There are special collectibles that can be found in this level that add bonuses to the final level score.

Check out this video by Tealgamemaster showing how to go through Side Mission 1: