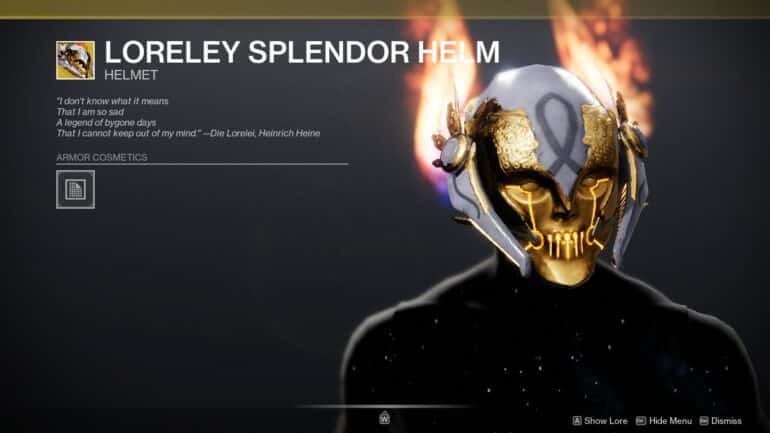 You might have heard by now that Bungie has recently nerfed the Loreley Splendor Helm in its recent 6.2.0.3 hotfix. Here’s the weird bit though. The nerf wasn’t part of the original patch notes. It was made official once word got around that something was going on with the Titans’ favorite exotic. This breakdown/guide is going to be about the Destiny 2 Loreley Splendor and the alternatives you can use until something else becomes meta.

For starters though, I really don’t know how a nerf of this scale was going to go unnoticed, especially if it’s the essential armor piece that’s kept Titans alive in end-game content. But there’s no denying that this is a shock for most Destinty Loreley Splendor enthusiasts.

Destiny 2 Loreley Splendor Helm What does it do?

Introduced back in season 16, the Loreley Splendor Helm provided a level of survivability for Titan guardians. Sure, there were ways of becoming a tank even before the helm was added but I would argue that none of those builds made it look so easy.

And that’s because of the helm’s Exotic Perk – Cauterizing Flame.

When you are critically wounded with full class ability energy or when you cast a Barricade, create a Sunspot at your location that has improved restoration effects.

From what I’ve gathered, it seems ok still in mid-level content. Its effectiveness in higher-level content, however, has taken a major blow.

Build crafters will have to make a few changes in order to get back to the same level post-nerf.

As to why the Loreley Splendor needed to be nerfed?

It could be because of its perfect synergy with the Touch of Malice Exotic Scout Rifle. But that can’t be the sole reason why. Bungie balances things with what’s meta, (Looking at you, Divinity.) so there has to be something more to this than just Loreley Splendor being too strong.

Check out this video from YouTuber Mr. Fruit to see how beastly Touch of Malice was in Destiny 2 content when paired with the pre-nerfed Loreley Splendor helm.

Destiny 2 offered many ways of sustainability even before Loreley Splendor was introduced into the game. But not many were as effective as the changes Bungie made to the game. Through a combination of the Resilience rework and Solar 3.0, tanky builds that utilized Loreley Splendor were so attainable that most starting don’t even need armor mods like Well of Life. Players will need to keep an eye out for mods moving forward.

These exotics are some of the things that you can look towards when replacing Loreley. Some you can consider as “Loreley but with extra steps”, (It is what it is) while others will point you towards increased aggressiveness like getting ability energy back faster or Arc 3.0 compatible exotics.

Beacons of Empowerment – Sol Invictus lasts twice as long. Allies who pass through your Sunspot are granted Sol Invictus and Solar restoration.

Phoenix Cradle can be handing for your healing purposes if you’re still looking to make sunspots. You’ll have to rely on Sol Invictus but at least the option is there whenever you need it.

When 3.0 Arc speculations were going about, there was talk of using An Insurmountable Skullfort in most Destiny 2 activities. But it never really got momentum. Loreley Splendor was just that good. Now, players can finally give this a try.

Alright now, let’s talk about getting abilities back faster.

For this build, you can skip the healing for the most part. Why? Well, if you’re killing things faster and more frequently, you don’t have to think about healing. But seriously, slap a few well mods and a gun that runs Incandescent and you can probably deal with anything less than Masters content rather easily.

The Path of Burning Steps

Firewalker – Solar final blows periodically grant you an escalating bonus to weapon damage. You are harder to slow or freeze with Stasis, and when you break out, you take no damage from doing so, creating a burst of Solar energy around youself.

Speaking of Incandescent weapons. the Path of Burning Steps is the match for that. Granted you’ll see the most benefit against Stasis enemies in Destiny 2 PvE and PvP but when’s the last time you saw any Stasis enemies outside of Europa?

The Heart of Inmost Light benefits guardians who spam abilities like their lives depended on it. That could be you if you find yourself between a Champion and a hard place. This was the go-to for PvE and it can be again now that Loreley Splendor has been nerfed.

Ok, admittedly, this is more on the fun build side of things. But outside of crafty Titans baiting Hunters (like me) around the corner where One Punch Man was hiding too, you don’t see them much in Destiny 2 PvE or PvP. We need more Thunderclap Titans!

Mask of the Quiet One

For the last one Exotic that could make a comeback, I present to you the Exotic Helmet that Loreley Splendor made irrelevant. Granted it wasn’t really that good even Loreley hit the scene on account that you needed kills while wounded to get max health. But with Solar 3.0, new Resilience, and a whole of mods, you can probably make something work.

And that’s it for this list. Titans – it’s going to be alright. You have options still. Unless Bungie decides to nerf Wells, 100 resilience, and Heart of Inmost Light. But it’s ok, Bungie might nerf Divinity first for everyone before nerfing Titans again.

Check out this video from YouTuber Aztecross where he talks about the recent patch notes and how the recent nerf affects the Titan experience.