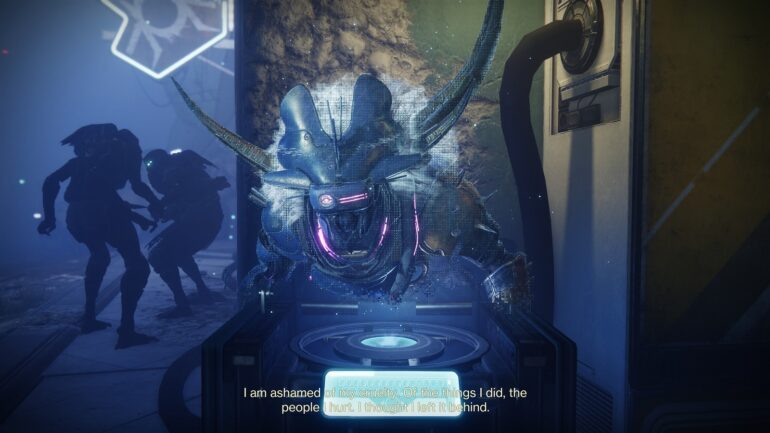 This is your Destiny 2 weekly reset for October 04, 2022. This week sees the return of Grandmaster Nightfalls to Destiny 2. We really hope that Bungie fixes whatever was wrong with the Gyrfalcon’s Hauberk. It’s been one ‘fix’ after another with the new Exotics. It’s just a shame that what needed to be fixed was an Exotic that was actually useful. (Sorry Point-Contact Cannon Brace.)

But enough about that, next up we have a little of last week’s story update and a look at this week’s scheduled activities. Including double rewards in Nightfalls thanks to the return of Grandmaster Nightfall.

As of the writing of this article, we are Step 49 of 62 in the Sails of the Shipstealer questline. By our estimate, we are only a couple of weeks away from the quest’s conclusion and the season’s first half.

Before we talk about the latest seasonal story update, let’s go ahead and talk about the hotfix that’s coming to the game this week. According to Bungie, next Tuesday, October 4, Destiny 2 Hotfix 6.2.0.7 will be released. It will include the following changes:

These are the changes that Bungie announced at last week’s TWAB. We expect there to be more changes as the hotfix goes live tomorrow.

From the Bungie Help Twitter account, a fix for the Gyrfalcon’s Hauberk Exotic is on the way. It’s planned to roll out in mid-October.

Bungie also announced this week that they have introduced a few changes that made things easier for players to get red border weapons. Makes you wonder why they didn’t just make it so from the start of the season.

After last week’s bombshell, this week’s story update felt more like a calm before the storm. Drifter and Eido had a talk and Eido is starting to understand why her father chose to hide things the way he did. (I still can’t get over the fact that Drifter’s name was once Germaine.)

Mistraaks, for his part, has started to step up and is in the process of revealing everything with the hope of finally putting the past behind him. All he asks for is a little patience for everyone involved.

Meanwhile, the artifacts’ whispers are slowly becoming audible. And from the looks of it, there is room enough for two more artifacts of Darkness. We are nearing the end of this particular questline in a couple of weeks’ time at the latest. If Eramis wasn’t desperate then, she certainly is now.

Also, what does the Lucent Hive have to do with all of this? Are they under orders from Immaru… or carrying out Savathun’s? We’ll find out in due time.

With the start of Grandmaster Nightfalls this week, Bungie saw fit to give hard-working Guardians a little bonus with their Nightfall rewards. This will go on for the rest of the week.

For our PvP enthusiasts out there, Showdown comes to the Crucible. Also, the Crucible Labs opens up again bringing with it the Zone Control experimental game mode.

It’s that time of the week again where everyone asks the question – where is Xur?

Well, this weekend Xur can be found in the hangar in the tower. The platforms at the back near a landing pad, to be precise. And what’s our favorite agent of the Nine selling this week? Let’s see.

Efficient Expedition – Complete Expedition in each in under 10 minutes.

This week’s featured Nightfall mission is The Glassway. We are going back to Europa for this one and it will be our job to stop a Vex incursion into our neck of the woods. Additionally, expect more materials and resources with the bonus Nigthfall rewards that are active for the week.

The Nightfall weapon dropping this week will be the D.F.A. Handcannon.

Showdown returns to the Crucible next week. If you are missing seasonal challenges for this activity, here’s your chance to complete them.

Bungie is bringing back one of its experimental game mode. This week it’s going to be Zone Control. Much like the Eruption game mode, playing this mode gives Bungie as to how to improve on it before releasing it as its own Crucible game mode or create something new with the lessons learned from it.

This week’s featured raid is the Garden of Salvation on the Moon. As for this week’s featured Dungeon is Prophecy. You can find that under the Legends tab. And as usual, completing these featured content will reward you with pinnacle gear.

In relation to Grandmaster Nightfalls, Garden of Salvation will reward you with the Divinity. While the Prophecy Dungeon gives you some very high-stat armor which are necessary in high level content.

This week’s challenge is called Gaze Amaze. This challenge occurs during the Gorgoroth encounter. And it will require the Gaze Holder to be inside a Pool of Reclaimed Light while Gorgoroth is looking at them.

Check out this video from Youtuber xHOUNDISHx where he also talks about the upcoming week’s activities for the seventh week of Destiny 2 Season 18.