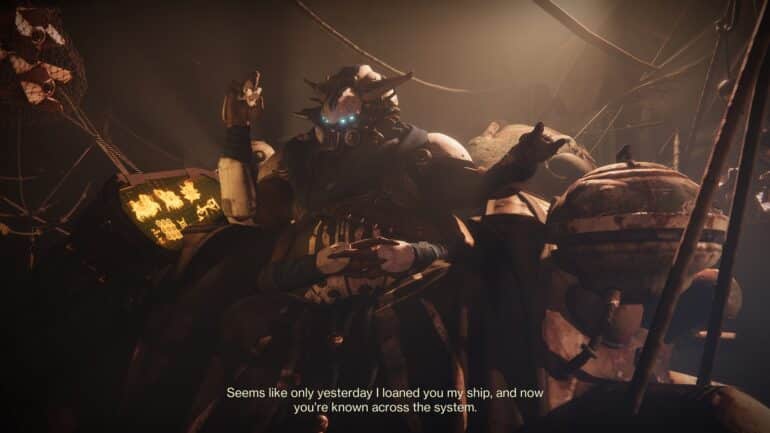 This is your Destiny 2 weekly reset for October 11, 2022. We are at the end of two months, and we finally get to see the conclusion of this 62-part seasonal quest. It hasn’t gone the way we expected and with the final week upon us, it looks more like we are setting up for the next story quest that will start after this year’s Festival of the Lost. Let’s not forget about the community event that’s set to start around that time as well.

But before all that, let’s go through what we can expect in the eighth week of Season 18 after the Destiny 2 Weekly Reset.

We have confirmed that the Lucent Hive are going after the artifacts. But more than that, Drifter warns us to watch our backs in case something really bad happens. I suppose that comes with the territory at this point.

In his own words:

“You’re going after chunks of a dead disciple of the Witness – and you’ve almost got ’em all. That’s some serious juju.”

We also learned a surprising bit about Spider… before he was called Spider. RIP Rakis.

The most illuminating part of the week has got to be when we returned the seventh artifact to the H.E.L.M. and Eido elaborated more on Nezarec’s role during the Collapse. Apparently, it was Nezarc that led the first assault on Earth which eventually led to the Collapse. The pyramid ended up on the Moon where it laid dormant until Eliksni refugees found it.

It’s all still second-hand information but it’s better than nothing. We’re expecting an explosive ending to the current season quest.

The Sails of the Ship Stealer quest is finally done. And though the fight between Mithrax and Eramis was fun to watch, nothing was resolved. Eramis didn’t have a change of heart. But at the very least Eido and Mistraaks are working together on the artifacts, which is a nice change of pace.

With that being said, I really hope the next quest blows all our expectations out of the water. We’ve gone too long without something big happening. I suppose the Witch Queen spoiled us a bit with what we can expect from Bungie now. Mistraaks and Eido may be able to do something that uses the relics as a core.

And this thing about “The Curse of Nezerac” being able to drain lifeforce has gotten me intrigued. Another gun like the Touch of Malice… I’m not sure we’re ready for that just yet.

I guess we’ll find out more in a few weeks. But stay tuned as we ramp up coverage of the Destiny 2 Festival of the Lost event coming next week.

It’s the week before the seasonal event and things are kind of quiet for the most part. But we do have bonus Crucible ranks active this week if you fancy some PvP action. Crucible Labs returns for a second week along with Zone Control.

It’s that time of the week again when everyone in the Destiny 2 community asks the question – where is Xur?

Well, this weekend Xur can be found on the tree trunk next to the fast-travel spot of the Watcher’s Grave area on Nessus. You can get up there by parkouring your way there. Just follow the floating name tags. And what’s our favorite agent of the Nine selling this week? Let’s see.

Antiquarian VIII – Return the eighth relic to the H.E.L.M. Also, defeat Champions across the system Champions defeated in Ketchcrash and Expedition will award bonus progress.

This week in Destiny 2 sees the Witch Queen Strike, Lightblade, return to the Nightfall and Grandmaster Nightfall playlist. In this one, we’re tasked to defeat one of Oryx’s old rival turned guard dog, Alak-Hul within the temple to Oryx.

This week’s Nightfall weapon is the Mindbender’s Ambition Legendary Shotgun. With the Unstoppable champion mod being so essential this season, the pairing with this shotgun will be really good.

Players taking part in Crucible this week get to enjoy bonus ranks gains. Rift also makes a return to the playlist this week.

For the second week in a row, Crucible Labs returns. And this week we are continuing where we left off last week with Zone Control. Let’s get Bungie some additional data, shall we?

This week sees the Deep Stone Crypt as the featured raid. The raid itself is set on Europa and your team will be tasked to take down a mechanized Taniks before it wrecks havoc on Europa. (Do keep your cool during the security check.)

Grasp of Avarice is this week’s featured dungeon. If you have the 30th Anniversary pack, this is your chance to get some dungeon loot as well as the Gjallarhorn exotic catalyst.

This week’s challenge is Under Construction. This challenge occurs during the Daughters of Oryx encounter. And it requires players to not stand on the same plate twice during the entirety of the fight. If your team can 2-phase the sisters, then this won’t be an issue.

The featured faction armor sets are:

Check out this video from Youtuber xHOUNDISHx where he also talks about the upcoming week’s activities for the eighth week of Destiny 2 Season 18.