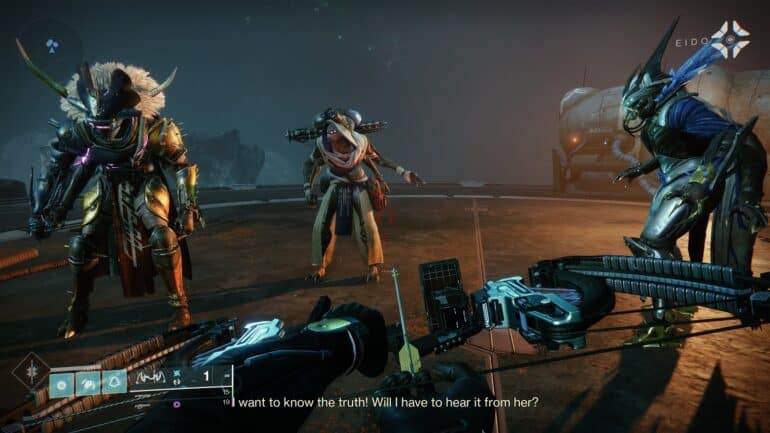 This is your Destiny 2 weekly reset for September 27, 2022. Just when you taught things couldn’t get more complicated in the story, Destiny 2 dropped a truth bomb that has major content implications for the rest of the season. If you want to know what that is, check out our weekly story update. But if you don’t want to spoil yourself, go right on ahead and read up on next week’s activities.

We are step 42 of 60. And things are building up to a major clash. And we are reminded once again that it’s never black or white with the story of Destiny 2.

After first encountering a mysterious third party who is also after the artifacts, Eido felt the need the inform Eramiskell about their existence. Naturally, Mitraaks was against this meeting but agreed anyway as long as the Guardian was there to keep the peace.

Both parties met on a deserted asteroid in neutral space. There, Eido learned the truth about her adopted father. Eramis told the story of how Misthrax’s family found the pyramid on the Moon… and the Disciple that lay dead inside. Nezarec.

The relics were pieces of Nezarec’s body. And Misthrax himself was once the owner of one of them. Using this new power, he carved a path of theft and murder. It only stopped when he decided to turn away from that life and followed the light.

Having found out the truth from someone else besides her father, Eido is more disappointed than anything else. There is still much we do not know about Mithrax and his connection to the darkness. But we are close to getting to the bottom of the truth.

What does that mean for Destiny 2 content? We might be looking at a showdown with a resurrected Nezerac within the lunar pyramid.. and perhaps hope for a fully recovered Osiris.

This week sees bonus Gambit ranks all week long. It’s a good time to grind out those ranks too since there are two seasonal triumphs associated with Cry Mutiny, the ritual weapon for the season.

It’s that time of the week again where everyone asks the question – where is Xur?

Well, this weekend Xur can be found in the hangar in the tower. The platforms at the back near a landing pad, to be precise. And what’s our favorite agent of the Nine selling this week? Let’s see.

Raise a Glass – Perform emotes at the end of Ketchcrash or Expedition for additional rewards. Doing so on Master difficulty will award bonus progress. This interaction requires the purchase of the first Swashbuckler upgrade.

Ketchcrasher II – In Ketchcrash, destroy shield generators in the Maintenance Bay, hack terminals in the Treasure Hoard, and destroy storage tanks in Ether Storage. Doing so in Master Ketchcrash will award bonus progress.

This week’s featured Nightfall mission is “Devil’s Lair”. We are going back to the Cosmodrome for this one as go ahead and take down Sepiks Prime and its following of Fallen.

As for the Nightfall exclusive reward, it would seem like we will have the Silicon Neuroma sniper rifle up for grabs.

In case you missed out when it rolled out the last time, the “Mayhem” game mode is set to return to the Crucible playlist. This is another chance for Guardians to check off the “Flourish of Power” seasonal challenge from week 1.

This weekend, an experimental version of Trials of Osiris is active. In the Capture Zone game mode, a capture zone is enabled. Eliminate your opponents as usual, or capture the zone to win.

This week’s featured raid is going to be The Last Wish from the Dreaming City and the Pit of Heresy dungeon from the haunted hall at the bottom of the Scarlett Keep. This is your chance to get some powerful weapons including the One Thousand Voices. And remember, being featured content, both activities offer Pinnacle rewards upon completion.

This week’s challenge will be “Devious Thievery”. It will launch for the first time in the King’s Fall raid. It requires players to steal the “Brand of the Initiate” within a couple of seconds of taking the “Brand Claimer” buff. The estimated time is around 5 seconds from what we can tell, so you better strike will precision and urgency to clear this challenge in Master difficulty.

Check out this video from Youtuber xHOUNDISHx where he also talks about the upcoming week’s activities for the sixth week of Destiny 2 Season 18.