An overview guide on what to expect in the Hues of Violet Garden Event in Genshin Impact. 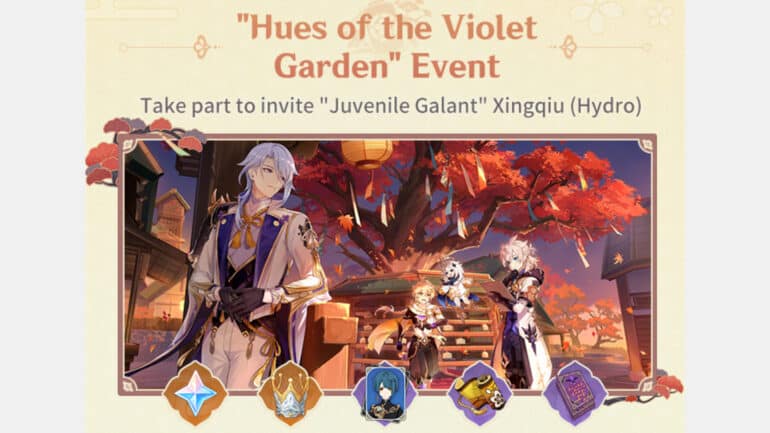 The Hues of the Violet Garden is a special limited-time event that came with Genshin Impact’s 2.6 version update. During this event, players can partake in four different mini-events to earn several rewards such as Mora, Primogems, Character EXP Materials, and lots more.

This event follows Inazuma’s preparation for holding the Magnificent Irodori Festival which commemorates “The Five Kasen”, a group of five talented and well-known poets from ancient Inazuma. The festival will be focusing on culture and creativity, and the events happening within the festival are meant to attract visitors from all the different nations, so players can expect to see familiar faces once more.

During the event, players can experience the fun of the festival more by playing the different minigames, such as:

To best enjoy the event, complete the following quests prior to starting the event:

If you haven’t completed these optional quests yet, you can enter the event through “Quick Start.”

Hues of the Violet Garden Start Date and Duration

The Moons and Stars Inscribe

In The Moons and Stars Inscribe, a bard from Mondstadt needs your help in searching for inspiration among Inazuma’s landscapes. Players will have to take pictures of sceneries based on the hints given to them via a poetic theme.

Collected pictures can then be submitted to the commissioner which will then help the bard compose more lines of poetry. Once enough lines have been made, you will have the chance to pick out the lines that you like to help complete the composition.

Theater Mechanicus is back once more, but this time, it has an added twist that would definitely provide a harder challenge for players.

Theater Mechanicus is basically has a tower defense type of gameplay, with an added roguelike element where you draw Wondrous Sticks that would either provide your Mechanici outright buffs to you or modify the enemies in different ways.

In Theater Mechanicus: Stage of Brilliance however, each stage will now have their own Stage Features which are different kinds of modifications that will affect the gameplay in some way. Players will have to work around or incorporate these features to their strategy in order to overcome the challenge.

Another change done in this version of Theater Mechanicus is that players will now have to equip Wondrous Sticks before entering each stage, which will give players more control over which buffs they would want to work on.

Other minor changes done to this version is that some Mechanici have already been constructed at the start of each stage, which players can decide to deconstruct or just leave be to incorporate them in their strategy.

Clash of Lone Blades is another mini-event where players’ sword fighting skills will be tested. Players will have to play against a sword master using only their sword and nothing else. During the duels, however, players will learn a new mechanic called Parry which lets them take a defensive stance that lowers any incoming damage, plus it allows them to immediately do a counter-attack.

Each day, a different sword master will be available to challenge and each of them can be fought against in three different difficulties.

To excel in this mini-event, players will have to be patient and be also quick with their reflexes to master executing a Perfect Parry which allows players to deal massive damage that could end the duel right away.

Th Floral Courtyard mini-event allows players to try their virtual hands on the art of Ikebana or flower arrangement. Specific floral courtyard themes will be given to players, which the players could then follow based on the hints given in the theme.

A courtyard is the term used for the result of a player’s efforts after arranging the different elements, which include not only just the plants and flowers used, but even the medium that they are planted on. Players can express their artistic side on how they compose and arrange their own courtyard, as long as it goes along with the theme provided.

Once done, players can take their courtyards into their Serenitea Pots as a display piece.

As players play through all the four mini-events for the Hues of the Violet Garden, they will be rewarded with the following:

Once players complete all of the mini-events’ criteria, they will also be rewarded with their own Xinqiu to add to their party or to further improve their existing one.