A Taste of Corporeal Punishment 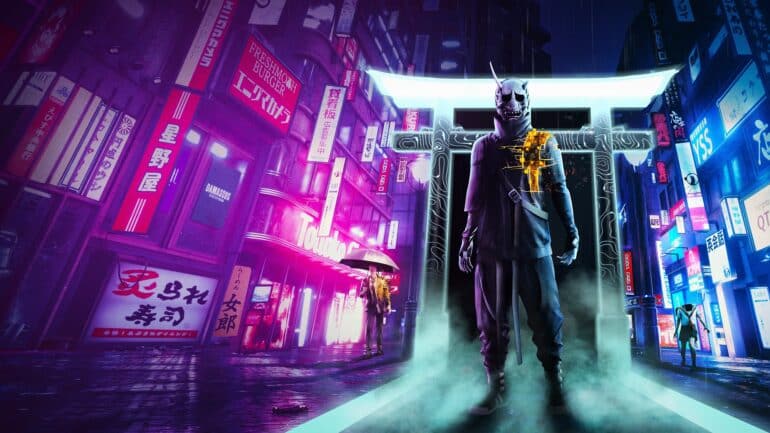 I spent much of my time in Ghostwire Tokyo hoping to find something real and tangible in its empty streets. Ghostly visages can only offer so much. The fairly sizeable and open world of Tokyo isn’t totally vacant. The glittering city is inhabited by creepy creatures from Japanese folklore, shops with adorable cats, and spirits in need of help. But I often found myself wanting more.

While there are glimmers of greatness through the game’s fifteen or so hour adventure, it doesn’t quite reach the heights I hoped for in the game’s opening hours.

Tango Gameworks previous two games, The Evil Within and its sequel, both offered a lot more substance in their worlds, characters, and narrative. I was disappointed with Ghostwire Tokyo’s story and kept hoping for moments to make me care. Despite all of that, I still enjoyed my time with Akito and KK – the two leads fused together with Akito’s humanly body and mind and KK’s resilient and determined spirit. Each is compelled to defeat the masked villain Hannya who has caused the city to be devoid of human life and has a mysterious plan involving Akito’s sister, Mari. Both Akito and KK have great performances in both Japanese and English. I swapped between the two, but ultimately preferred the Japanese even if trying to read subtitles in battle could be difficult.

While I loved Akito and KK’s dynamic, I often found myself not entirely caring about either of their plights. I felt sad for the injured and bed-ridden Mari, but narratively, I felt like I wasn’t given enough early in the game to establish a connection. By the end, when a lot of memory-led exposition explains things more clearly, I just sort of shrugged. Narratively, it felt too little too late.

The game does succeed in its side stories and offers further glimpses into the lives of various inhabitants in the city who linger in the in-between. Some missions were touching while others were not afraid to go down more humorous routes. I spent memorable missions helping ghostly figures who’d run out of toilet paper in a bathroom stall acquire more of that good, good TP. I also helped the spirit of a child who’d received a cornea transplant. She was plagued by visions of what the donor saw before they died, and I helped defeat the monster now haunting the child. Both these, and many more side missions, helped me connect more to the game’s world.

These little side stories helped the empty world feel more lively. I understand that the whole plot is that everyone is gone, but it felt best when I was interacting with and helping others. There were also side missions that introduced creatures and figures from Japanese folklore. These introductory instances with Kappas, Yokai, and more all felt special. Learning more about these figures and how they came to be was exciting. And then the game began to introduce them all over the game’s map and they became just another thing to check off. You aren’t required to do them, and I didn’t. The lack of a small story to go along with why you’re chasing down a Yokai made it feel less special and more like a gameplay device to offer me another thing to check off.

Even with its narrative shortcomings, the game looks great. Tokyo glitters and shines as you explore the deserted city. The game employs a things-to-do-in-an-open-world-game checklist of things to find and see. Nothing is boundary-breaking, but as you slowly uncover the map by cleansing Torii Shrines which lifts the deadly fog, more of the city unlocks. There are collectibles to find and weapon upgrades to unlock at smaller shrines across the city. I appreciated that almost everything in the game, from the bracelets you wear to power-up abilities to the collectibles you sell to merchants, links back to Japanese folklore. The game is rich in and shows so much appreciation for Japanese culture, and it was easily one of my favorite parts of the game.

There are familiar locales, convenience stores with snacks to buy, and lots of neon lights to brighten everything up. There are some moments where the other, underworldly side blends with Tokyo. These lead to some really stunning and cool moments with level and art design and blend the realism of our world with a magic that had me pausing and scrambling to open up photo mode on more than one occasion.

Eventually, you unlock the ability to grapple to the tops of buildings where flying Tengu circle and can see even more of the city. You also unlock a glide ability. This lets you hop from building top to building top and allows for more ways to explore. On the ground, you’ll run into a variety of enemies, collectively called The Visitors. Each is a manifestation of some sort of negative emotion felt by people. There are deadly, scissor-wielding women who embody a collective rage and vacant, expressionless figures in business suits worn down from monotonous work.

As cool as their designs and origins are, battling them is a slog. There is no way to dodge or really even move quickly in battle. Instead, you have a block that only completely negates damage if you time it perfectly. To do damage, have access to wind, water, and fire spells. They each require you to charge them up to really do meaningful damage and expose their core – which you can rip out to finish them off. If you are attacked, the charge is interrupted.

I wanted fighting The Visitors to be fun because it does look very flashy. At times, there are moments of excitement. Blasting a group of enemies with a fire spell and then ripping out the core of a half dozen enemies looks cool, but getting there was often frustrating more than anything. You also have access to a bow and arrow, which does high damage but also takes too long to draw, and aiming can be a bit of a nightmare.

Boss battles offer up more exciting opportunities, but that is mostly because of some really creepy enemy and level design instead of how you fight them. I also found two of the last few bosses to be frustratingly easy. I played the game on normal, and just spammed one attack and managed to beat them and not even get hit. I often don’t ask for it, but I wanted more of a challenge.

To prepare for battle, you’ll level up by fighting enemies and rescuing spirits that you can turn in for experience points, and collecting spirits offer a somewhat addicting gameplay loop. There are over 250,000 spirits to save. Each time you collect some, you net anywhere from 90 to 750 or so spirits. It’s fun going around collecting them. There’s a sense of accomplishment I enjoyed when using a telephone booth to send these souls outside of Tokyo to safety.

All of Tokyo Ghostwire’s parts are serviceable, but almost every time I began to enjoy something, it stopped evolving and became stagnant. Based on the game’s opening couple of chapters, I thought I was going to love the game, but by the game’s end, I felt like I’d been beating a dead, ghost horse between the frustrating ghostly battles and narrative that just never clicked.

Ghostwire Tokyo is not a bad game, but it never reaches the greatness I’d seen Tango Gameworks do previously. If you’re a fan of open-world games, collecting things, and love side content, it might be something you enjoy, but be wary of the game’s narrative and battles. With those, you’re in for a bit of corporeal punishment.

Ghostwire Tokyo – Review
Score Definition
We tell you, it’s a good game! It’s not average! It might have some problems here and there, but you have to admit it is a “Good” game.
Pros
A beautiful rendering of Tokyo to explore
Lots of love for Japanese folklore and culture
Akito and KK are great together
Great enemy and boss design
Cons
Fighting is slow and lacks a lot of substance
An uneven narrative
Lack of difficulty at big moments
Isn't particularly inventive in any way
7.5
Good