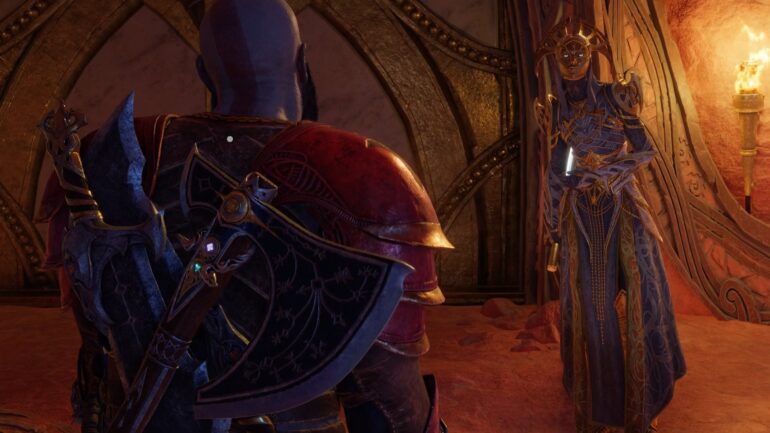 The Elven Sanctum is among the various favors you can find in God of War Ragnarok. This will be available to players once they’ve progressed through the main path called The Reckoning. Read on, and this guide will go over everything you need to know to complete The Elven Sanctum Favor/side quest, including some tips and solutions along the way.

How to Unlock The Elven Sanctum Favor?

Players will automatically unlock The Elven Sanctum Favor once they’ve progressed through the main path: The Reckoning. The main mission takes place in Vanaheim, but this favor will need you to travel to Alfheim.

Explore the Elven Sanctum in Alfheim

After teleporting back to Alfheim, board the Gulon Sled and head northwest into The Barrens until you reach a golden locked gate. Make sure to track the Favor from the map to easily navigate the path. Now, carve the rune on the lock so Freya can open the way, into a new region called The Forbidden Sands.

To reach The Elven Sanctum, travel northeast to the quest marker and grapple up to the doorway. Collect the artifact to your right before heading inside the door.

Search for Clues about Elven History

Once inside the Sanctum, proceed through the next room and spot a Lore Marker directly in front of you.

You can find a Lore Scroll and the “The Lost Pages” Labor by searching the library’s tables.

Head up the wall to your left and you’ll uncover another Lore Marker, this one titled The Arbiters of Knowledge.

Lastly, climb up further and find 4 collectibles: A red chest, a Treasure Map on the shelf, a Legendary Chest containing the Jewel of Yggdrasil, and the Consul’s Journal. After recovering the journal, the next objective of the Favor will begin. When you’ve finished, leave the building using the entrance you used to enter.

Just as you attempt to exit the door, you’ll be stopped by The Maven and trigger a boss fight.

The Maven tends to be pretty aggressive and will often launch into a series of quick attacks before finishing with a slam that cannot be blocked. To counter this, you should block her normal assaults, back away from the slam, and then rush in for a heavy attack.

Additionally, she will want to maintain some distance between you; hence, you must parry her swords. You’ll need to roll out of the way of her X-shaped projectiles occasionally. When she does her shield strike attack, it has a wide area of impact and can harm the entire boss room if you aren’t careful. Counter with your own shield strike to stun her and protect yourself.

There are no checkpoints or health nodes, so tread carefully and remember to parry when you need to. Near the end of the battle, she’ll attempt self-healing; disrupt this with a shield strike, then kill her out as soon as the [R3] prompt arrives.

After defeating The Maven, leave the Sanctum and complete The Elven Sanctum Favor.

Watch this walkthrough video by Backseat Guides for God of War Ragnarök’s The Elven Sanctum Favor: