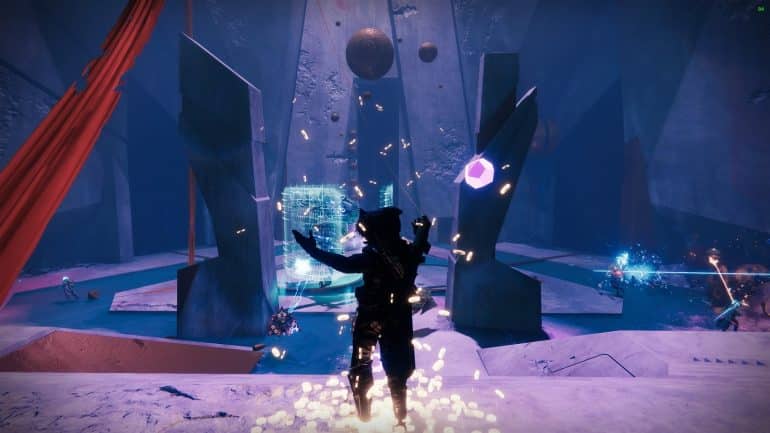 The Gyrfalcon Hauberk is an outstanding Exotic in Destiny 2. Recently introduced last season, this hunter Exotic allows you to output impressive amounts of damage when coming out of stealth. It’s kind of been reworked in Season 19 and now it’s used primarily for PvE content. Though it still has its place in PvP if build into it more.

When Guardians first got the Veles X legendary pulse rifle from ritual activities, it was considered very weak. Initially, we didn’t really think about it too much. Until this Gyrfalcon’s Hauberk came along and we can actually use the traits as they were intended.

In this guide, we’ll show you how you can make your very own debuffing void hunter that stays alive with overshields and grenade spam.

For this build, Stylish Executioner plays a critical part in this build. Its main skill allows you to go invisible after taking down a debuffed target. The secondary weakens a target if you do a melee attack whilst invisible. Trapper’s ambush can work too but this build makes heavy use of a pulse rifle, and while it’s an aggressive burst frame, the Veles X is really hard to use against Champions that are not Barrier Champions in close range.

Echo of Instability is the only essential Fragment for this build. It works well with your grenade and Veles X. The others can be swapped out for your personal preference. (I really like to do finishers for utility purposes and I really like Devour and prefer it for most of my void builds.) Echo of Persistence is just nice to have and extends the timer for all buffs. Feel free to swap that out if change out the others.

Starting with the Combat Style mods – we have Reaping Wellmaker, Well of Utility, Font of Might, Elemental Ordinance, and Bountiful Wells. All of these mods feed into your endless consumption of void wells. All of your attacks and movement tech are bound to spawn a well after taking down an enemy.

For Destiny 2 season 19, we’ll be running Monochromatic Maestro and Explosive Finisher on our class item for general content. When running solo endgame content, you may want to equip Solo Operative and Weakened Clear, even if it’s at the cost of bountiful wells.

For this build, we’re running Witherhoard. Never mind the fact that it got nerfed at the start of Destiny 2 Season 19, it’s still a very good weapon for that lingering damage over time. If want to replace Lord Kelvin’s Basilisk with another mod for solo content, you can replace this Witherhoard if the situation calls for it. At least you’ll have a heavy grenade launcher in your power slot.

The workhorse of this build, the Veles X is what you’ll be using to assassinate debuffed enemies. And that’s because of Repulsor Brace. This trait grants you an overshield after defeating a void debuffed target. This trait is dreadfully underrated but it’s only good with void builds. Golden Tricorn gives a damage bump that can actually make this decent against high HP targets. The best thing about it, it’s the level 16 reward for ritual events. So, you’ll be ensured to be getting this gun.

As for other options, you can swap this out for a Hollow Denial with Repulsor Brace or any other weapon that carries the trait. Wavesplitter can work too if you put more focus on Orbs of Power.

Your power weapon choice is completely up to you. We just like having the Crowd Pleaser from Gambit because it’s a void heavy grenade launcher and this roll has demolitionist. With enough enemies caught in a single blast, you can get your grenade back almost instantly. Works well with your Shadowshot Deadfall.

At the start of any encounter, you’ll want to enter combat in stealth. Start shooting enemies with Veles X to break out of stealth. Gyrfalcon Hauberk will kick in at this point and you’ll have volatile rounds for a good while. Volatile enemies explode after taking additional damage. And if they die from your Veles X, you’ll get overshield that’ll last for a good bit.

This build works best if get kills with your grenade to activate Golden Tricorn and make elemental wells. If ever your grenade is on cooldown, that’s a good time to bring out the heavy grenade launcher with Demolitionist. It can help you get back your grenades faster per kill. Also, If you have Explosive Finisher equipped, you can get back your grenade right away and you’ll be in stealth again with Echo of Obscurity.

In general, you want to be coming in and out of stealth as often as possible for Gyrfalcon Hauberk and volatile rounds.

If there’s ever a situation where you are forced to stay visible for an extended period of time, you should try to get a grenade kill and that activates Echo of Instability, granting your void weapons volatile rounds.

Most of the time, you’ll be looking for debuffed enemies to shoot with your Veles X to keep your shields up. And all the while your shields are up, feel free to spam grenades for ad clear purposes. This build also does an impressive amount of damage on powerful enemies.

What complicates this build is the fact that you have to keep track of multiple buffs and debuffs and you’ll need to keep track of them to get the most damage. The window for the most damage potential is only open for 5-6 seconds under the best of conditions. So, you may just want to focus on going into stealth and timing your grenades. That’s good enough 99% of the time.

And that’s our second hunter build for season 19. We’re always working on other builds both for fun and endgame builds. Check back here with us when the next one drops.

Check out our builds for this season:

Check out this video from YouTuber Aztecross where he goes over a powerful endgame build for Gyrfalcon’s Hauberk on a void hunter.