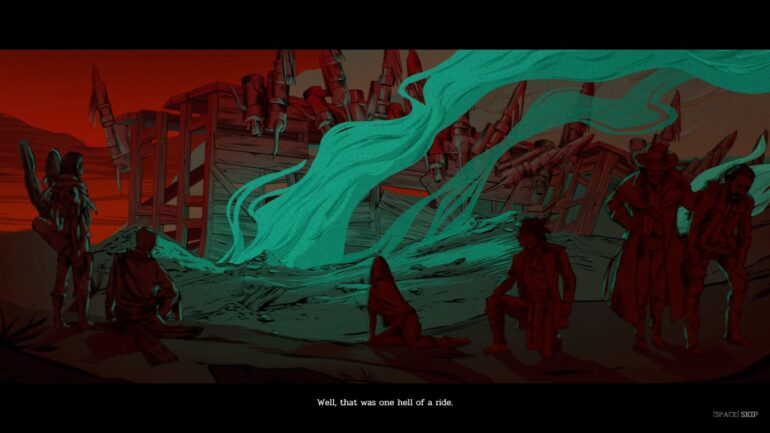 Hard West 2 is not your typical tactical RPG. For starters, your resources are scarce and money is hard to come by. It’s also good to keep in mind that the game’s “normal” difficulty, called “hard”, is already challenging enough as it is.

In this guide, we’ll give you some tips and tricks that’ll make your time in Hard West 2 a little easier.

Let’s start with the basics. Luck plays a big part in the game. The more luck you have, the higher the chance you landing a shot. If you have max luck, your next is almost guaranteed to hit.

You get luck by missing shots and getting hit by enemy attacks. Be very mindful about your luck, as a killing blow will reset your luck back to 0. You might want to hold off until you have to deal the killing blow to an enemy that’s behind full cover as opposed to casually killing an enemy that’s out in the open. But that might change depending on the win condition. Playing aggressively in this game is all about high-risk, high reward. And losing the bet is very costly.

It’s All About That Bravado

Bravado is one of the game’s main mechanics. Basically, if you land the killing blow on an enemy, that character will replenish all their AP back, allowing them to perform actions again. This can be repeated as many times as possible as long as an enemy dies during that character’s attack.

Tracking Down Targets in the Overworld

While tracking down targets in the Overworld, the next site is usually a little bit away from the last site. They are never too far apart. Look around the vicinity of the map and you’ll be able to spot the next point in the trail. These things don’t usually last very long but they’ll sometimes end in a gunfight or require Loyalty actions from your posse.

Forming hands to have access to unlock more skills

Forming poker hands is the only way to unlock the majority of skills in the game.

Here’s a list of hands you’ll need to make in order to unlock skills. These are ranked from highest to lowest.

If you want a higher chance of landing a shot, consider equipping a gun with the Trick Shot skill. With it, you can ricochet shots off of objects in the environment. Red glowing objects are capable of bouncing bullets. Keep in mind that some objects break after bouncing a bullet.

The Trick Shot skill allows you to bypass cover entirely and increases your chances of landing a hit. You can ricochet off of multiple objects but travel distance plays a part in the bullet reaching its destination.

According to the game, “When a character has the Duelist status, they can perform a Counter. When you try to shoot them with a single-target ability, they instantly shoot back. It happens so fast that even if you kill a character, they can still counter.”

It should be noted that melee attacks do initiate a counter. There is a very possibility of the attack hitting your character.

How to counter enemies that have the “Duelist” skill active

When you encounter enemies with Duelist active, it is often advisable to ricochet shots. Weapons such as shotguns and explosives are also capable of bypassing enemy Duelists.

Which posse member to give early support

It is a good idea to quickly build your relationship with Cla’Lish. Having her as an “Ally” early will be extremely beneficial when it comes to settling disputes that involve Native Americans. Additionally, her hunting skills allow her to assist in feats that would otherwise require the use of brute force or waste of valuable tools.

Though I’d advise against giving all loyalty points to her as there are other obstacles that’ll require some help from the undead or a situation that might require Flynn’s special set of skills.

Guns like the derringer and the sawed-off shotgun may initially appear weak due to their low damage numbers but a closer look will reveal that they serve a more supporting role. They are perfect secondaries because, unlike primary guns, they only use 1 AP. Meaning that you can potentially burst down a target should you decide not to move. I say “target” here cause after using it once, you won’t be able to use it again until the next round. Can you imagine how spammable it could have been without that little condition?

Using Flynn’s Shadow Swap to cause disarray on the Battlefield. She can trade places with enemies in the back, like a sniper, and their position to shoot at the backs of enemies. At her best, Flynn can turn a battlefield into a chessboard.

To get the most out of Old Man Bill’s Dead Man’s Revenge supernatural power, give him as much health as possible. That’s because the more health is taken off of Bill’s health overall HPs, the damage it’ll do. Oddly enough, this attack has the most potential for damage but the requirements to make it truly shine often mean sacrificing mobility.

Cla’Lish’s supernatural power allows her to summon an undead warrior whose existence is to draw fire away from the posse. Summon him in wide open spaces to trick enemies into shooting at him. If he survives, he’ll disappear back from where he came from. At higher levels, the player will be able to control the warrior and deal damage to enemies.

Laughing Deer needs a lot of Speed in order to cover the distance between opponents and not waste AP. Using his supernatural power, Deer gains damage the more tiles he covers in order to kill the target. At long distances, it may prove to be very deadly.

Lazarus’ supernatural power is a true game changer. He is able to swap his health and any status modifiers to a target within his line of sight. For example, if Lazarus is in low health, he can use up to 1 AP to swap with a nearby enemy’s health and then shoot them to initiate Bravado and a heal over time. At higher levels, Lazarus is able to swap health with undead targets as well.

And that’s it for this guide. Happy hunting.