How to Get Nine of Hearts in Hard West 2 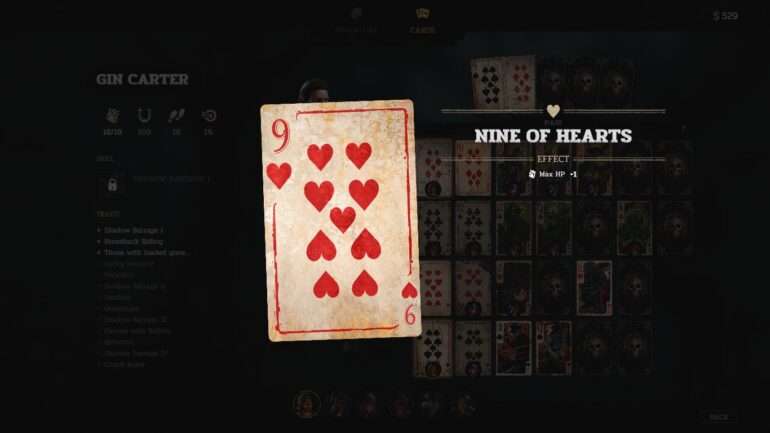 In the grand scheme of things, the nine of hearts in Hard West 2 is pretty much an inconsequential card. But if you are looking to have all the poker cards in the game you’ll have to do this one little thing for it.

In the main storyline mission, “3:10 To Heaven” the crew is tasked to steal a train in preparation for their assault on a bridge held by Shadow Dancer forces. The mission itself is pretty straightforward – take over the train by pulling the brakes. To get the nine of hearts, you’ll need to make the train stop in the first round.

In this guide, we’ll tell you everything you need to know how to get the Nine of Hearts in the “3:10 To Heaven” mission.

The mission itself requires both Gin and Lazarus. It’s their job to infiltrate the train and set it up without getting the passengers involved. After looking up the passengers for their safety, the duo signals the rest of the gang to approach the train.

It is important that you have Laughing Deer and someone else with good speed stats like Flynn.

For this all to work, you’ll need to give Laughing Deer all available Speed cards you have on hand. At this point in the game that should be: The Ace of Clubs, Queen of Clubs, Jack of Clubs, Ten of Clubs, and Nine of Clubs. Make sure he has the Tobacco Pouch trinket too. That’ll get his Speed to a whopping 38.

For Flynn, you can equip some like the Snakeskin Boots on her. But what she’s really going to do is scout for you.

During the 3:10 To Heaven Mission

At the start of the level, what you need to do first is to weaken GUNSLINGER in the forward carriage. It’ll take both shots from Gin’s gun. If successful, his health should be as long as 5. If you manage to land a Bullseye, you don’t need to move Lazarus closer and take the final.

This is to set up the guy there to be killed by Laughing Deer’s melee (4 damage). Bring Deer in for the killing blow.

After that, select Flynn and makes sure she rides as far forward (as indicated in the image below.) This is so that Laughing Deer can have a line of sight at the SHARPSHOOTER on the train car. You’ll then want to use Deer’s Supernatural power to decimate that SHARPSHOOTER. Don’t worry if it seems like overkill. Cause it is.

Once he’s been dealt with, target the SHARPSHOOTER that’s taking cover in the coal car. You should have enough Speed to easily cover the distance and kill him with swings of your melee weapon.

With that done, simply set your sights on the brakes, and interact with it to make the train stop and end the mission.

And that’s it. It’s as simple as that. Of course, by doing this you are skipping the other optional objective that is looting the safe at the back of the train. Is getting the Nine of Hearts worth getting over a handcannon? Maybe. But we’ll you let you be the judge.