In Harvestella love is in the air and is more free than you think. 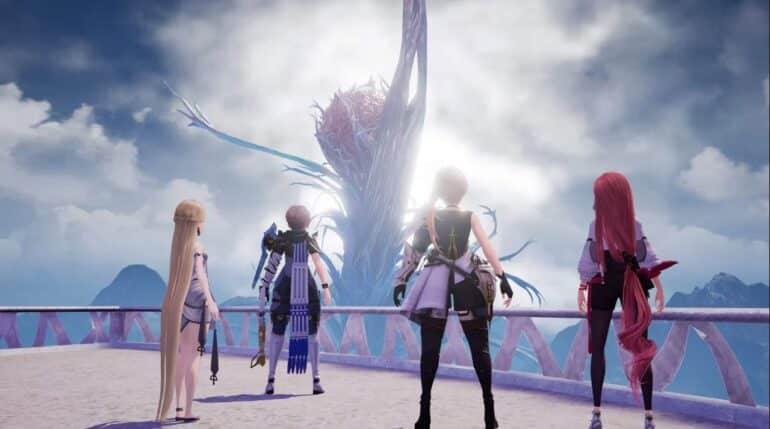 Players are exploring the possibility of Harvestella romance. Since this JRPG will allow you to foster friendship with NPCs around you, there is some plausible room for something a bit more than just platonic relationships. This guide will show you everything you need to know about romance in Harvestella.

Does Harvestella Have Romance?

Yes, Harvestella will allow you to romance characters in the game. This was confirmed via translation of the Japanese Twitter page for Harvestella. Hiroto Furuya mentioned in an interview that players will be able to choose a life partner once the requirements are met.

This information regarding the romance is thanks to u/VertVentus in a Reddit post which translates multiple sources about Harvestella romance features.

How to Romance Characters in Harvestella?

You have to first complete the main story of Harvestella before you’re able to romance any of the characters. Once your Intimacy with a particular character hits MAX levels, you will be able to start an event called “Partnership” which is the closest thing to marriage in Harvestella.

Partnership is essentially asking the NPC to live with you. However there are requirements before you can start this event. One, the Harvestella main story must be cleared. And two, the you must have max Intimacy with the NPC you with to romance.

As to why you need to clear the game first before you’re able to start any Harvestella romance may have something to do with the world being in peril during the events of the game. This means that romance seems to be saved for end-game content. However you are able to foster Intimacy and raise your friendship with characters before clearing the main story.

Here’s a complete guide on all Harvestella romance options in the game.

There are a plethora of characters you can romance in Harvestella. They each have their own personality, background, and unique skills to offer to you. Here are the possible romance options in Harvestella:

Aria is a young woman with long pinkish red hair and yellow eyes. She’s a scientist from the future who traveled to the past because of some accident. After having lost her memories, she finds herself in an isolated town called Lethe Village. Due to her retroactive amnesia, the local doctor asks you to keep a watch on her until her memories return and she finds a way to go back to her own time.

Increasing your relationship with Aria will unlock the Assault Savant combat job.

Asyl is a young man with blue eyes and blonde hair. He is a member of the Argus Brigade, a group dedicated to protecting their hometown of Nemea. After meeting the young woman named Aria, Asyl decides to stay with her and the protagonist until the former’s memories return.

Asyl is straightforward and rather blunt with his opinions. Though his honesty has earned the trust of the people living in Nemea.

Increasing your relationship with Asyl will unlock the Sky Lancer combat job.

Istina is a young woman with mesmerizing magenta eyes and long silver hair. She teaches the children of the orphanage in Nemea Town. Istina has a mysterious past that she keeps hidden and is forced to confront it upon your arrival at the orphanage.

While usually quiet and rather stoic, Istina does read storybooks and educate the children of the orphanage. You can find her easily curious about the different places in the world which she loves to read about.

Increasing your relationship with Istina will unlock the Shadow Walker combat job.

Heine is a young man with emerald green eyes and shoulder length blond hair. Known as a flirt, he is often described by others as handsome. Beneath his flirty exterior lies the mind of a genius responsible for creating a submarine he named Fiasola.

Increasing your relationship with Heine will unlock the Mechanic combat job.

Emo is a young woman with purple eyes and long flowing blonde hair. She spends her time as a songstress in Seaside Town and is rumored to already be in a serious relationship with Lorelei who is one of the game’s antagonist. Many find her to be awkward to converse with due to the fact that she feels inhuman for some mysterious reason.

Increasing your relationship with Emo will unlock the Woglinde combat job.

Brakka is a young man with purple eyes and brown hair. Much about him remains mysterious. He is seen wearing a long dark cloak upon meeting you.

Increasing your relationship with Brakka will unlock the Avenger combat job.

Shrika is a young woman with blue eyes and short blonde hair. She serves as a missionary for the Seaslight Order. Despite this, Shrika seems to be searching for a new faith after questioning what her order believes in.

Increasing your relationship with Shrika will unlock the Pilgrim combat job.

Is Romance Gender Restricted in Harvestella?

Romance will not be restricted to gender in Harvestella. According to Hiroto Furuya, who is the game director, there won’t be any restrictions with who the player can choose to initiate a partnership with.

This is actually why Harvestella calls it a Partnership rather than marriage. Furuya states that gender is not important to him and that Partnership is an image of choosing a life partner.

That’s our Harvestella Romance guide. We hope this article was informative and we’ll continue to add new details as the game releases this November 4, 2022. For more on Harvestella, you’re already in the right place.