Here's how Joel and Ellie look like in the TV series, well, their backs anyways. 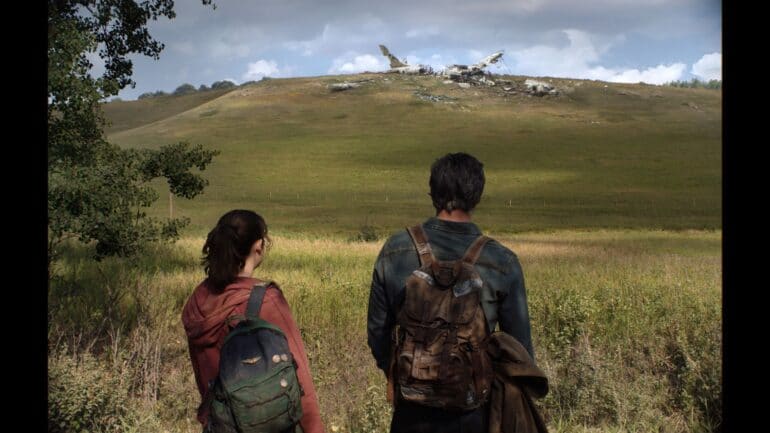 A first look at HBO’s The Last of Us TV series has recently been revealed online giving us a teaser of how Pedro Pascal and Bella Ramsey look like.

HBO’s The Last of Us TV Series Teaser Image

The teaser image was uploaded on the official Naughty Dog Twitter account, the game developers who made the first and second games. It is only one image, but it gives both fans and newcomers a small glimpse of what the TV series would look like. It shows both Pascal and Ramsey looking at a grassy hill where a destroyed plane sits on top of it. Both are wearing the familiar outfits that the in-game Joel and Ellie characters have with signature backpacks. At first glance, fans mistook it as an in-game screenshot and at closer inspection it was actually a real-life picture of both actors. Fans are convinced that the TV series has really captured what the game portrayed.

The Last of Us TV Series Details

The upcoming TV series is based on the popular and award-winning PlayStation video game The Last of Us. It takes place 20 years after the world has been overtaken by a deadly fungus that has turned most of humankind into zombie-like creatures. One of the most-experienced survivors at this time is Joel and he is tasked by a radical group called The Fireflies to smuggle Ellie out of the quarantine zone and into a destination to finally save the world after they find out something within the girl.

HBO’s The Last of Us TV series cast also includes Gabriel Luna as Tommy, Joel’s brother, Nico Parker as Sarah, Joel’s daughter, and Merle Dandridge as Marlene, her in-game character, the leader of the Fireflies.

Craig Mazin will be the one to write and its Executive Producer with Neil Druckmann, who is the writer, and Creative Director of the two games. Other Executive Producers are Carolyn Strauss, Rose Lam, Naughty Dog President Evan Wells, and PlayStation Production’s Asad Qizilbash and Carer Swan. The pilot episode will be directed by Kantemir Balagov with Jasmila Zbanic and Ali Abbasi. This is a co-production with Sony Pictures Television.

While the gaming community has not been fully convinced of The Last of Us Part 2 with some of them criticizing the content, most fans agree that the original game was worthy of the Game of the Year title. With the TV series based on the original game, it seems many fans are hoping that this will be a TV series worth to binge all throughout.

HBO’s The Last of Us TV Series has no official release date yet and is currently in production.