How to Get Regigigas Pokémon Brilliant Diamond and Shining Pearl

Learn how to catch this legendary colossal Pokémon, Regigigas 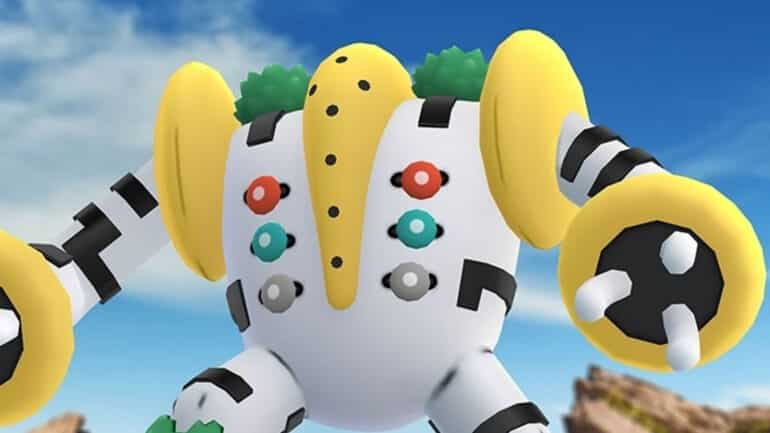 Regirock, Regice, and Registeel are three Legendary Pokémon you should be familiar with if you played Pokémon Emerald. Pokémon Brilliant Diamond and Shining Pearl introduces them back into the roster for you to catch, however there’s an even more powerful mix of the legendary trio, the Regigigas.

In Pokémon Brilliant Diamond and Shining Pearl, the Regigigas is one of the most powerful Legendaries in the Sinnoh region. Don’t scoff at it for being a Normal-type Pokémon, the Regigigas has access to a variety of punishing attacks that will put you on your backfoot. On this guide, we’ll teach you how to get the Legendary-type Pokémon Regigigas.

Regigigas has Slow Start ability. This makes his attacks and speed do half damage for five turns from the beginning of the battle.

How to Get Regigigas

You can only get Regigigas after you’ve already completed Pokémon Brilliant Diamond and Shining Pearl. So no using Regigigas to plow through the Elite Four. This Legendary Pokémon is pretty much bragging rights at the point you get it. Here are the steps to capture Regigigas.

After you’ve completed the game and gained access to Ramanas Park, you’re going to need to exchange your shards for three Discovery Slates.

Once you have the three Discovery Slates, you’re going to have to go to the discovery and prepare for a tough battle.

By using the Discovery Slates in this room, you’ll challenge Regirock, Regice, and Registeel. They’re powerful Pokémon so be careful in your fight with them. Make sure that you capture them and not just knock them out. You’re going to need to capture the Legendary trio to get Regigigas.

You can use Fly to fast travel to Snowpoint City. Once you’re there, ensure that Regirock, Regice, and Registeel are all in your party. You need to head into the Snowpoint Temple which is behind the city’s Pokémon Centre.

By the entrance, someone will stop you from entering. But if you’ve already beaten Cynthia then someone will come to give you permission. You can then enter freely without restrictions.

Head to the Lowest Point of the Snowpoint Temple

You’re going to have to solve some puzzles along the way. Once you’re at the bottom of the Snowpoint Temple, slide around the ice in the correct pattern and you’ll eventually encounter Regigigas. At that point, you can capture the legendary Pokémon.

The battle will only ensue if you have Regice, Regirock, and Registeel in your party. Regigigas will be Lvl 70 when you battle him.

Now you know how to get Regigigas.

Regigigas takes twice as much damage from fighting moves. You can use fighting-type Pokémon to your advantage during your fight with it.

How to Defeat Regigigas

You need to take advantage of the first five turns against Regigigas. His Slow Start ability makes it that his attacks do less damage and are slower during the beginning of the fight. After that, be prepared for powerful attacks such as its Hammer Arm which can do a lot of damage.

Regigigas moves are normal, fighting, ghost, dark, psycho, and rock types. So you can build a team of Pokémon that are resistant to attacks of these types.

Bring fighting type Pokémon among your team as Regigigas takes twice as much damage from fighting type moves. This will be your best bet into defeating and eventually capturing Regigigas.